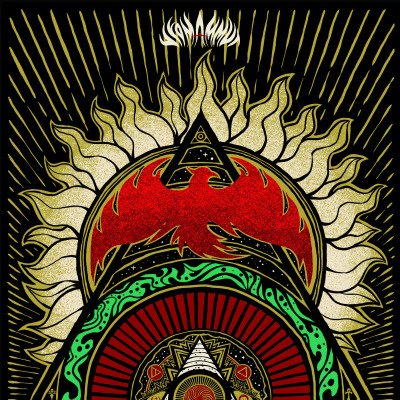 This is art. Art to get immersed in. Art to be unnerved by. Art to pin you to the floor.

Ufomammut have been around for what seems like aeons. They have ploughed their furrow of intense, metronomic, sludgy psychedelia as alien mammoths for an adoring audience since last century. They have always been at the arty end of heavy music, from their intricate album covers to the intense live experiences – indeed, the band members are part of a graphic design collective.

But we haven’t heard anything new from the band since 2017 when 8, their stunning record of a single movement broken into eight songs, was released.

And in 2020, just before the world stopped, their drummer, Vita, said he wanted to leave. The phrase thrown about was that Ufomammut were on “indefinite hiatus”. In all honesty, at that time the same sentence could have been used to describe pretty much anyone who didn’t work in health services. But even so, it looked as if Ufomammut were frozen in a glacier – at an end after eight albums.

But the exit of a drummer and a global pandemic were not enough to stop vocalist and bassist Urlo and guitarist Poia from becoming extinct (sorry, but I have mammoth analogies in my head, and I am going to run with them). They recruited Levre on drums. Actually “recruited” sounds a little formal: Levre was well known to the band and was involved in a side project with the two remaining members, so they asked him to board the Ufomammut, err, UFO.

And the result is Fenice – phoenix in Italian. And my word, it is brilliant. Like 8, it is meant to be listened to as one 38-minute piece, even though it is split into six parts. Urlo told Echoes and Dust in the week of release that they wanted to “experiment more, follow new ways of making music, being more free than before” with this record. But rest assured, it is still very much recognisably Ufomammut. It is not as intense as Ecate, nor is it as bombastic and churning as 8. But the ingredients that have made them such a hypnotic experience are still there.

The most noticeable differences are the atmospheric sections dominated by spooky electronics and only lightly punctuated by guitars, as well as the enthusiasm with which Levre appears to approach his new gig on drums.

It begins in foreboding fashion with ‘Duat’ a 10-minute journey which starts with a synthesised heartbeat. It morphs into a dirty, other-worldly pulse, then an urgent motorik drum beat. Then the guitar comes in and we can feel that Ufomammut are in a far livelier headspace than they were with 8. It is almost catchy, in a twisted, stoner-groove kind of way. It certainly makes the listener sit up and take notice – it may even get you to dance, if you’re into that sort of thing.

The heartbeat continues in ‘Kepherer’, the spooky, atmospheric second phase of the suite, which is made up of little more than distant thunderous synthesised beats. It segues nicely into ‘Psychostasia’, which contains a staccato sound as if the guitar is being played with a violin bow. It is the first part of Fenice to contain vocals and is meditative and almost calming. Until a triumphant scream of guitar heralds a crunching, sludgy riff, of course.

We are pulled back into calmness with ‘Metamorphoenix’, a kosmische trip which is far more intimate than anything we have heard from Ufomammut. But after seven minutes of floating, ‘Pyramind’ and ‘Empyros’ bring back the heavy. A concrete block of a riff in the former track is bolstered by the familiar wobbly synth sounds that were peppered throughout the 8 album. The intensity dissipates somewhat during the two pieces, but the double whammy is still by far the fiercest part of the album.

It is some feat to bring together what is ostensibly a sludge power-trio, marry the sounds to spooky electronics and anguished vocals and make it into something that you are unable to tear your ears away from. But Ufomammut have done it. Fenice has large riffs (of course) but it also has light, darkness, intensity and calm. It will move even the most cynical of music fan. It is art.