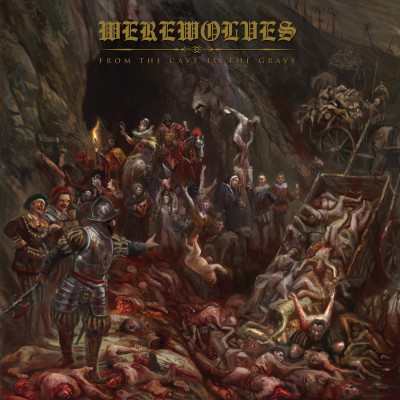 From The Cave To The Grave by Werewolves

Melbourne’s most vitriolic sons return in a frenzied dustcloud of wolf-torn battle vests and bloodied knuckles. The pack, comprised of vocalist Sam Bean, guitarist Matt Wilcock and drummer David Haley play that in-your-face brand of uncompromising and hate-fuelled death metal, always ready to slam their fists into your mouth.

The band seem to be the bringers of cataclysm with most of their releases ominously preceding some worldwide catastrophe. With two albums and an EP under their belt in their short three year career they’ve already knocked out a few teeth and brand new third album From The Cave To The Grave is yet another bone-crunching stampede of audial violence.

‘Self-Help Book-Burning’ is the uncontrollably savage, cranial-stomping beast every death metal release worth its praise needs as an opener. After an amusing intro echoing everyone’s post 2020 attitude, the throat is slit and the violence runs gloriously free, tearing fleshy chunks out your ears with Matt Wilcock’s lycanthropian claws flaying intricate, speedy riffs and an absolute blastbeat battering from Dave Haley’s bombarding footwork. Sam Bean snarls like a monstrous hound, rapidly drooling out profanities and hatred with a variety of vocal styles.

‘We Are Better Than You’ unleashes At The Gates-inspired fury with Wilcock providing sharp, staccato Swedish thrash riffing and even a tasty hint of blackened, serpentine metal rearing its ugly head towards the climax. ‘Harvest of the Skulls’ serves as the only respite as the slowest track amongst more fiery burners, yet provides some gnarly irregularity with its almost avant-garde black metal vibe.

‘Nuclear Family Holocaust’ is a mini rage tornado of urgent, cyclonic riffs and body-battering blastbeats. The guttural, down-tuned tremolos and jagged stringwork give this an old-school feel, so crank this all the way up. ‘Pride And Extreme Prejudice’ throws more twitching chunks Of carnage into our fragile ears and pushes you face-first into a lit hob. The short fits of blastbeating and galloping drum hits charging through primitive, Marduk-esque riffs, make this banger a chaotic storm of seething abhorrence.

Werewolves embody that ‘burn the world to the ground’ ethos and aren’t afraid to stick their foot up a few backsides on their way to the party. Their music is barbaric, caveman-like and brutally primal… simple without lacking sophistication. There’s some refinement in the riffs, which are razor sharp, so it’s straight-up death metal but stamped and brutalised with their own unique touch and permeated with a little dark humour, showing the fearless three-piece are still up for a laugh.

The ferocious Aussie’s have unleashed yet another face-melting beast with From The Cave To The Grave, a lacerating, utterly bloodthirsty and frenetically unhinged record. It’s a merciless skullfuck of an album with nine spine-shreading tracks ready to get you windmill moshing and face-planting brick walls. This kind of no nonsense, balls-out metal is exactly what’s needed in these stressful times and it’s one of many reasons to go get yourself mauled by these three Werewolves< right now.