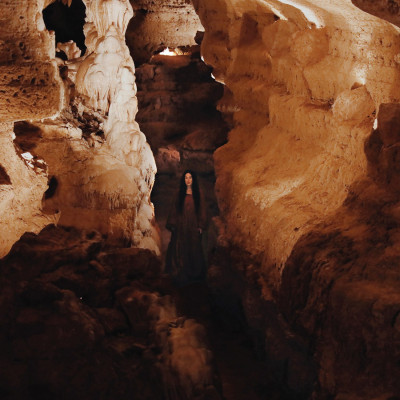 It has been a few years since Zola Jesus’ (a.k.a. Nika Roza Danilova) last release Ovoki, which I really enjoyed. Zola is a unique and inspiring artist and I was excited to hear of her new release entitled Arkhon. The word ‘arkhon’ means ‘power’ or ‘ruler’ in ancient Greek. “I do feel like we are living in an arkhonic time; these negative influences are weighing extremely heavy on all of us. We’re in a time of arkhons. There’s power in naming that.” says Danilova. I think the real power that Zola unleashed on Arkhon is, once again her stunning voice. “I had gone through a deeply transformational process of inner growth. That annihilated a lot of tension in my voice”. While Zola’s voice has always been a highlight of her art, on Arkhon there are many moments where it leaps to the forefront of tracks and the results are truly captivating.

This is certainly found within the beautiful sparseness of the track ‘Desire’. The track is just vocals and piano. A curious outlier for an artist that often savours lavish and evocative layers of sound. But, wow, what a moving track “Desire” is. It is bare and so emotive, “arkhoniful” and exemplifies the phenomenal range and intensity Zola is capable of. Remarkably, she notes that it was recorded in one take: “‘desire’ was written in one sitting at my piano at home. the song was an exorcism for my pain and lack of closure around heartbreak.” The lyrics clearly echo this: “Lick my wounds like/You can taste them/ Would it make much/Of a difference?/If you knew my pain/ If you could see my side/ Only for a minute/ Just enough to empathize…”. An absolute gem and captivating piece of art.

Throughout ‘Arkhon’ Zola’s voice soars. The opening track ‘Lost’ is another stunning piece. Speaking on the track, Danilova says: “It’s true. Everyone I know is lost. Lost hope, lost future, lost present, lost planet. There is a collective disillusionment of our burning potential. As we stray further from nature, we drift from ourselves. ‘Lost’ is a sigil to re-discover our coordinates and claim a new path.” The lyrics suggest the need for a new personal direction: “Everyone I know is lost/ Flare gone missing, turning dark/ We keep walking through the weeds/ Hoping for a quick release/ In my woods I find a spot/ To forsake all that I’ve got/ Recombine into the leaves/ Stick around and then we’ll see”. The track oozes atmosphere with its gentle but sombre synth and layers of vocal harmonies and samples from the Slovenian folk choir.

In addition to the new creative directions Zola has foraged into, there is plenty of material that merges soundscapes, from the beautiful, heartfelt ‘Dead and Gone’ to the airy, moody ‘Fault’. One of my favourite tracks was the ominous ‘Sewn’. This bass-heavy rumbler has a palpable tension with many strange sounds buried within the mix and lots of thumping percussion. The album is a journey for sure. You’ll visit a range of emotions and atmospheric vistas which only a few artists are capable of leading listeners to.

Many artists need to evolve in order to create and Zola came up against this challenge on Arkhon. “At some point, I had to work with other people. I needed new blood. I needed somebody else.” Danilova found some direction from producer Randall Dunn, known for his work with Sunn O))) and from drummer and percussionist Matt Chamberlain. “When I look back at my work, I see there’s a theme where I fixate on my fear of the unknown,” says Danilova. “That really came into fruition for this record, because I had to let go of so much control. I had to surrender to whatever the outcome would be. That used to be really hard for me, and now I had no other choice.” There is a long list of ‘additional performances’ on Arkhon which only furthers the richness of the albums’ sound. There is additional bass (lots of additional bass!), cello, violin and even a french horn.

Arkhon shows the quality and passion of one of the most underrated artists of our time. The music showcases many facets of Zola’s entrancing voice. A voice which is at times raw and visceral, others melodic and alluring. The accompanying music and words are blended to tell a story and create introspection and reflection. It is remarkable art. A very highly recommended listen. You can certainly count me amongst the ‘Zolastrians’.