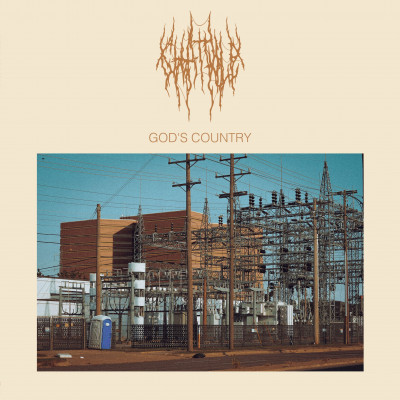 Well now, this right here is the kind of aural filth and degradation I like. Oklahoma’s Chat Pile are another band of unhappy, unstable, young Americans abused by their nation’s animating dream-lie and venting their frustrations through deliciously unpleasant music. Named for the toxic waste heaps left by unrestricted lead and zinc mining in their home state they’re a deranged and diseased stagger through ugly American dysfunction. They might just be your new favourite band. After two harsh, churning, EPs their first full-length, God’s Country, goes a little more wide-screen. A cruise around the post industrial ghost town. Get in loser, you’re gonna love it.

Despite their illegible logo Chat Pile’s sound really owes more to the likes of Big Black and The Jesus Lizard than black or death metal. I guess noise rock has been around long enough now to be a deadbeat dad. If we can loosely pin the hostility of those bands and their contemporaries on a response to Reagan’s America well, things ain’t got a whole lot brighter lately have they? Chat Pile’s vocalist takes the stage name Raygun Busch, which I hope isn’t too subtle for you. A thread of everyday violence and horror winds through the songs. His mostly clean vocals are well placed in the mix because the words are often smart, sometimes funny, and overall offer a skewed and pleasingly individual voice.

‘Why’ cuts through false piety around homelessness by directly asking “Why do people have to live outside?” and a series of growingly desperate follow ups about the hardships it visits upon people. Nothing is carried over from the EPs (pick ’em up on Bandcamp) and the nine songs here each have their own identity, shuffling their well stacked deck of influences around but always coming up Chat Pile. Drummer Cap’n Ron plays an electronic kit which gives a sentient drum machine edge to their sound. He cracks open the album with a more rigid, industrial beat than usual invoking Godflesh as the guitar whine and screaming come in but quickly settling into something looser, more chaotic. On ‘Pamela’, a mediation on grief with a “waiting to die” chorus, it combines with the spiralling guitar like a lost goth tune. At least until it drags itself to the lakeshore with some pummelling doom.

‘Anywhere’ opens on a great sliding riff over post hardcore shapes played with a slacker swing that suggests, oddly, Pavement. Unexpectedly drawn out it moves through several sections and while the lyric insists “it’s the sound of a fucking gun and it’s the sound of the world collapsing” there are parts of it that are actually kinda pretty. Shhh. The splendidly titled ‘Tropical Beaches, Inc.’ is somewhere close to the centre of their sound, it roars and pummels with an unhinged swagger, Busch yelling “Haunt me! Haunt me!” Coming to the close they take time out for a calm and creepy murder ballad on ‘I Don’t Care If I Burn’. The protagonist mulling over his homicidal motivations among uneasy found sounds.

On the more than nine minutes of closing epic ‘grimace_smoking_weed.jpeg’ they really drink deep from their own poisoned well, coughing up a psychotic episode soaked in absurd horror and cultural abjection. Busch howling the psychic pain blues amid a storm of guitar, projecting drugged dread, past trauma, violent and suicidal thoughts through the image of Grimace, a McDonalds corporate mascot. “Purple man, leave me alone!” It’s both hilarious and horrifying. He sounds distressed, the music a disintegrating nightmare. It ends with screaming. Chat Pile are a wasted crawl in the contaminated street, a dance of the broken, the sound of the world collapsing. It’s not depressing though, it’s confused, angry and wounded. Just like you.