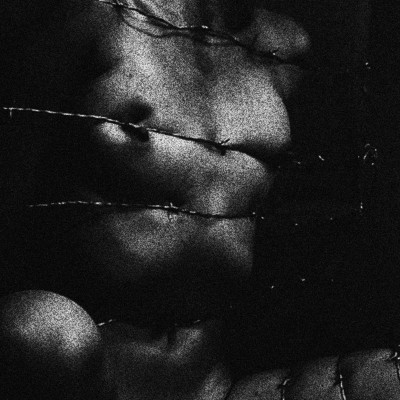 Degeneracy of the 5th Density by Clavicvla

Clavicvla is the deviant vessel of dungeon master Ittiel and one of the Italian underworld’s best kept secrets. You have to dig deep into the darkness of the web to pull any information and once you discover it you’ll be gripped eternally by the piercing, traumatising aural horror that Ittiel creates, perpetually lost in its mesmeric black tendrils and unbreakable walls of viscous-black sound.

Clavicvla dwells in that part of Ittiel’s mind, and connectively many of our minds, where escape from earthly corporealness is key so that the soul may embrace the darkness of the void. In fact, several press releases have mentioned throughout Clavicvla’s five year existence of leaving one’s physical form or obliterating oneself to be liberated. His music can be seen as a ritual preparation for death or emptiness and the cold, evocative bleakness of the audial fuckery he produces certainly echoes this sentiment.

Brand new album Degeneracy of the 5th Density unleashes 8 new plagues of foreboding, slithering perversion that’ll asphyxiate you from the inside out. Beginning with ‘Wrath’, a track that takes its time in scaring the pants off you with its droning, warbling hum like a haunted generator coming to life in an abandoned factory. Otherworldly, staticky interference and metallic, alien frequencies add a nuanced layer to a simple, yet frightening concept. ‘The Creation of Hollow’ toys with further simplicity, just a murmuring, crumbling soundscape of desolation and fear leaving you terror-stricken, frozen to the ground as if some unseen, incoming horror is devouring the universe around you, leaving you consumed by the void.

The eerie soundscapes of ‘Dead Bishop’ conjur up a dark, soundtrack-like feel of pure Transylvanian terror as ominous thuds and low, guttural creaking creeps ominously throughout the seething, convulsing atmospheres. ‘The Invocation of Flesh’ is an utterly insidious track and one built on agonising layers of anxiety that creep and crawl into your subconscious as fuel for night terrors. Grating, harsh tones are used to further dull your senses and send a few more shivers up your spine, as are monstrous knocks whose heart-stopping pounding is loud enough to make you question if it’s coming from inside your house. Maybe it is.

Our premiere track ‘Sati’ perfectly showcases Clavicvla and Ittiel in its ten minute length and sees him aim to scare by leading us into harrowing ambience that teases unbearable dread at each turn. These barely audible, low and lingering frequencies rumble and quake in the distance, churning a maelstrom of subtle yet horrifying hellscapes. The track opens up to static and swells into a hulking mass of rhythmic, ritualistic drum hits and Ittiel’s hissing, ghastly spoken vocals. It’s ten minutes of raw, audial menace and those lengthy seconds crawl over you like a thousand maggots.

Clavicvla’s music is never too in your face but can rather be seen as a nightmare always there, stalking you, biding its time but constantly breathing hot demonic breath on the back of your neck. It is the dark shadow emerging from the wall next to your child’s bed or the one voice out of hundreds inside your head that you fear the most.

Ittiel produces sepulchral noise that is meant to be immersed and bathed in with accompanying discomfort and sensory deprivation. These tracks are designed to make you crank the volume up to max and shove your earphones in until they penetrate your brain. Darkness will elevate these low frequencies and crawling, harsh drones, and if it’s not dark enough then sew your eyes shut and breathe in the blissful terror.

Degeneracy of the 5th Density is a fantastic, visceral and traumatising drag through the hellscapes and forbidden places of one’s mind and one listen will reveal your truest darkness and how you embrace its magnificent, soulless blackness. Even when it’s not playing this music will bury its way into your head somehow.