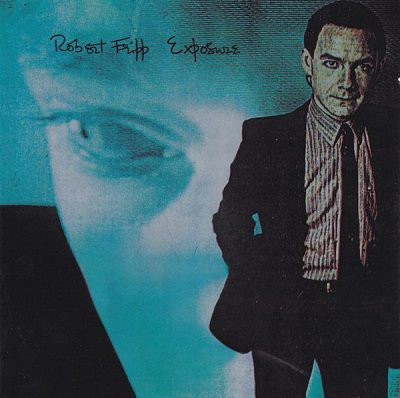 In 1974 after the release of their seventh album Red, Robert Fripp disbanded King Crimson due to exhaustion and disinterest within the music industry. “Top of my head blew off.” Fripp explained in a special from BBC2 Late Night in Concert in 1985 entitled Robert Fripp: New York – Wimborne, “Because I knew this was exactly what I had to.”

“I saw what it was to be a human being. For me it was possible, but I also I saw the price I had to pay for that. I saw what if you like real freedom as a human being is, and I saw it was possible for me to have that. And at that this time King Crimson was just about poised to be the most successful rock band in Europe. And I spent seven years like this. So how could I throw away my career to go and live in a house with a hundred loonies in Sherborne in very uncomfortable condition’s, at the same time I knew I had to do that.”

You could tell that Fripp was worn out during that time frame, but knowing that it was time to take a sabbatical. He joined Sherborne House which was a spiritual institution founded by philosopher J.G. Bennett, he attended there for lasting ten months from October 1975 the following year.

During that time in the mid ‘70s, Fripp worked on side projects alongside playing with Van der Graaf Generator (‘The Emperor in his War-Room’ and the closing climatic segment in ‘A Plague of Lighthouse Keepers’) and producing Keith Tippett’s 1972 release of Blueprint, Centipede’s Septober Energy, and Matching Mole’s second and last studio album, Little Red Record. Since collaborating with Brian Eno from No Pussyfooting, guesting on Here Come the Warm Jets with the exhilarating tracks ‘Baby’s On Fire’ and ‘Driving Me Backwards’, followed by live shows they did together in Europe, and appearing on Another Green World and Evening Star.

But at the beginning of the punk movement in 1976, Fripp returned to the music world as he would guest as a studio guitarist on Peter Gabriel’s sole self-titled debut (Car) in 1977, produced his second album (Scratch) in 1978 and going on tour with him under an alias name, “Dusty Rhodes”.

Then, he got a call from Eno about collaborating with David Bowie, playing on his 12th studio release during the Berlin trilogy entitled Heroes whilst working with Daryl Hall on his solo debut, Sacred Songs. As he was returning to being a busy, busy man, he had begun working on solo material which would later be his debut release entitled Exposure.

Originally released on the Polydor / E.G. label, and reissued on the DGM label with an incredible remix done by Steven Wilson, it is time to give Exposure the proper recognition it deserves. When you put this album on, you get a sense that Fripp has moved into uncharted waters by combining the Post-Rock insanity, Crimson-sque textures, and with guest vocalists from Terre Roche, Peter Hammill, Peter Gabriel, and Daryl Hall, lending Fripp a helping hand to bring Exposure to life..

From the opening introduction of the harmonising vocalisations with a Ligeti-sque surrounding of ‘Preface’ to a ‘50s rockabilly punk-rocking attitude of Daryl bringing the house down on ‘You Burn Me Up I’m a Cigarette’, it shows that Robert is more than just the sounds of Crimson. He is having a ball playing some those power chords by following in the footsteps of Steve Jones of the Sex Pistols and bits of Johnny Ramone thrown into the mix.

But then he dives back into the ocean for a reprise of the Larks Tongues-era continuing where he left off in the second part of the climatic instrumental suite with an intense cat-and-mouse chase by being ‘Breathless’. I can hear aspects of the Syd Barrett-era thrown in for a split second as Robert channels the introduction of Pink Floyd’s ‘Interstellar Overdrive’ from The Piper at the Gates of Dawn as Steven’s mix brings it to the front of the stage as he ups the mixes to give audiences a real jolt on what to explore.

Then, Hammill comes into the stage with ‘Disengage’ after Fripp’s nod to Klaus Schulze’s Irrlicht for a quick moment before it goes into a Pre-THRAK attack as Peter becomes a snarling insane madman by taking over the asylum. With his crazy maddening effects that Peter does, Robert follows him in hot pursuit creating these wild sounds for him by making Rikki Nadir more nightmarish as he becomes this Hyde-like character in full attack mode before taking you into the darker territories of some snarling blues in ‘Chicago’ and an intense chase with ‘NY3’.

Daryl returns to the blue-eyed soul sounds to give his vocals a return after going into a punk-rocking attack on the second track as he lends Robert a bluesy drive down to a romantic warmth by viewing the ‘North Star’. You can tell that there is a bit of Belew in Hall’s vocals and the direction on where Robert was about to go as he was ready to reform Crimson in a new wave tone.

Meanwhile, Terre Roche of The Roches brings a warmth atmosphere to detail of a lonely woman to be free from the streets and finally being embraced with love and care on the tragic figure named ‘Mary’ while laying down some heavy brutality on the title-track with Fripp spelling out the word in the heart of the Big Apple.

The dystopian spoken dialog fills the entire room as Fripp channels the ‘Dance of the Maya’ honouring the Mahavishnu Orchestra’s Inner Mounting Flame-era on ‘Hååden Two’ and taking us on another meditating experience with eerie and chilling pin dropping momentum as Robert takes listeners on a flying course by viewing the ‘Urban Landscape’.

But just as he starts to calm down, Hammill has been unleashed from his cage with a little help from Roche by bringing the roof down with an intensive break-up between two loved ones with fiery drum work by Narada Michael Walden on ‘I’ve Had Enough Of You’. The two part sections of ‘Water Music’ gives a sense of another relaxing segment to have other musicians take a break from the heavy challenges Robert has given them so that he and Gabriel can bring the revamped edition of ‘Here Comes the Flood’ a proper structure.

When you listen to the original version of the song from the first PG album in 1977, it had more of a Genesis-sque vibe from The Lamb sessions, but the Exposure version which for me is a better version of the song, has a mournful arrangement between piano and Frippertronics that blends well. There’s nothing wrong with the original version from the Car album, but this take with Wilson’s mix, Gabriel’s double-tracking vocals brings a sense of sadness and the chance to move forward in life after losing a loved one.

Most of the song reminded me of 2K’s video game epic, BioShock where the people of Rapture had no idea that they and the city itself were going to be doomed the day it opened in 1945. And the lyrics on ‘Here Comes the Flood’ fit that scenario very well on how the Rapture Civil War was like a powder keg ready to explode until the 1958 New Year’s Eve Riots as hell has broken loose.

The six bonus tracks contains vocals that Daryl did during the Third Edition of the album’s release which was re-released in 1983 and reissued in 2005 tackling Hammill’s vocal ranges which he does brilliantly well by becoming this monstrous roar on ‘Disengage’, the Amon Duul II-sque vibes of the title-track, and ‘NY3’, but returning to the soulful beauty on ‘Mary’ and the bluesy vibes of ‘Chicago’.

But it’s Terre Roche going downtown on the closing 23rd track of ‘Chicago’ as she channels elements of Peter Hammill, but adding the vibes of Janis Joplin to the mix in the 12-bar grooves. The DVD not only contains the 5.1 mixes of the fourth edition, 24 bit remaster of the Third Edition, but the unreleased 1978 album Last of The Great New York Heartthrobs.

The CD/DVD set contains a 16 page booklet with liner notes by Sid Smith about the making of the album and its legacy which in 1998 The Wire magazine considers Exposure “The Sgt. Pepper of Avant-Punk”. For me it’s more than just that, this is Fripp going as far as he can. It shows his true power, his true identity, and his vision on where he wants to go next.

Yes it is challenging, yes it is punky, yes this is Fripp going beyond the Futuristic voyages from the golden-era of Crimson from 69 to 74, but Exposure is an album that’ll grab your heart and tug it so hard, that you can’t let go of it. This reissue that DGM has unleashed this year, will keep you on the edge of your seat until the final curtain call will drop.