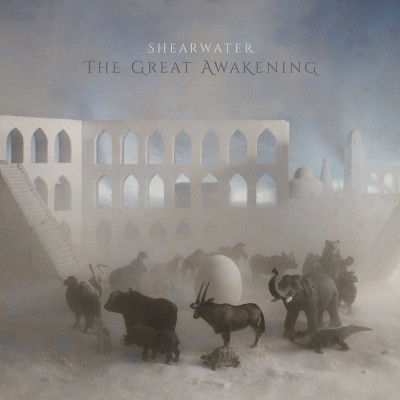 The Great Awakening by Shearwater

I have followed the musical trajectory of Texan group Shearwater for some time now, always marveling at the beauty of Jonathan Meiburg’s work during these dark days. The Great Awakening is their first release in six years and their seventh overall, released on the band’s own imprint in conjunction with Secretly Distribution. Produced by the band and Dan Duszynski (Loma), the album evolved through 2020 and 2021, emerging as a meditation on hope amid hopelessness. Shearwater veterans have returned, including keyboardist and arranger Emily Lee and drummer Josh Halpern.

The record has a spaciousness and a thoughtfulness wound into every last note, as well as an appreciation for the natural world. This was aided by field recordings from Meiburg’s journey while writing his critically acclaimed debut book, A Most Remarkable Creature: The Hidden Life and Epic Journey of the World’s Smartest Birds of Prey, released in March 2021. The music is an amalgamation of post rock, jazz, and even soundtrack music for a film that has yet to exist.

In immersing myself in this current work, I am starkly reminded of Talk Talk, which I think has to be an influence. I am thinking Spirit of Eden era, not earlier Talk Talk. It has a spiritual feel in spots, beginning with the short wonder of the opening track ‘Highgate’. Reverent and grand, it starts quiet and then crashes symphonically and majestically on your head. Meiburg’s vocal intonations are precise and in sync with the sweeping tapestry he creates. ‘No Reason’ has a cool bass, drums, and piano opening, fluttering between jazz and spacey post rock. Lovely and sad! ‘Xenarthran’ is marvellous, and Meiburg explains:

“Xenarthrans are the ‘strange-jointed’ mammals, which mostly live in South America: armadillos, anteaters, and sloths. Only one species of armadillo has wandered up to the southern U.S., and while we were recording The Great Awakening in Texas, I often saw them scurrying dimly through fields at dusk or snuffling in the mud after a rainstorm, and I couldn’t help admiring them. This song, and Emily’s eerie video, aren’t about armadillos, exactly—but they are about making your way through the dark spaces of a menacing but still very beautiful world. The roaring sounds near the end are howler monkeys I recorded in Guyana.”

‘Laguna Seca’ has darker sonic shading, and veers into Japan/David Sylvian territory. It is unsettling and unlikely to set your ears at ease. ‘Everyone You Touch’ is an acoustic treat with crystal clear tones, somewhat melancholy and reflective with a beautiful string arrangement (or what passes for one, could be a synthesiser). ‘Empty Orchestra’ sure is pretty and moves through rapidly, like a brief but cool breeze on a sultry day. ‘Milkweed’ makes me think of the plight of monarchs, who are threatened. It is a long form song with experimental music trappings, uncertain and containing a beating percussive heart. ‘Detritivore’ is an animal that feeds on dead organic material such as plant detritus. The song itself is slow and ponderous, and I am left feeling sad after it fades out. ‘Aqaba’ is gorgeous and the piano motes dust its surface with sparkling brightness. A definite high point for this listener, and possibly the best song here. ‘Wind is Love’ is Meiburg’s coda, and its musical underpinning suits the starkness of the arrangement. A fitting end to a lovely release, one of the band’s best and recommended for fans of the aforementioned artists and for anyone that follows exquisitely rendered experimental rock.