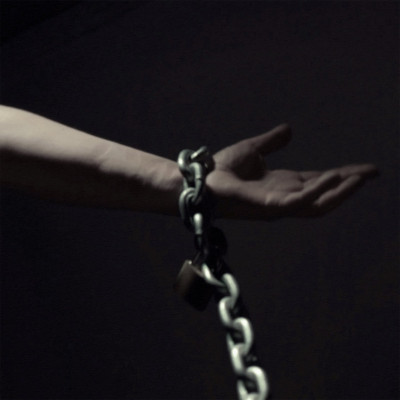 It Can Never Be Satisfied by Burden Limbs

Misery. That’s a dark place many of us often visit and for London-based self-deprecating jank metallers, Burden Limbs, they certainly seem to revel in its company. The six-piece play utterly claustrophobic and self-described ‘miserable bastard music’, which if you were to nail a genre to it would be along the lines of psychedelic post-rock with a heavy, unbearable smack of depressive yet cathartic walls of sound.

It Can Never Be Satisfied is Burden Limb’s official and long-awaited debut album after existing since way back in 2012, beginning life as a solo project of fellow Echoes and Dust writer Chad Murray, before evolving into the full-fledged band of six members it is today. The album consists of eight tracks, four of which are collected from their back catalogue. Various iterations of the songs ‘Shallow Grave’, ‘How Many Times Must I Reset’, ‘Hypochondriac’ and ‘Burden Limbs’ have all appeared on the bands demos, EPs and live offerings over the years. In their own words the bands songs have been described as “an advanced preview of an album we’ve yet to record…” so it’s safe to say these fattened-up tracks deserve their place on this album and are the peak version of the particular recording.

‘Flesh Prison’ is a crunching, staticky blast of monstrous, almost-death metal and a doom-bringing slab of hard-rock violence that sees the band break shackles and unleash inner demons. Precision drum hits wildly flail and pound onto skin as crushing, down-tuned guitars play with vigorous intensity, with riffs that are as angry as they are catchy. Harmonised, feminine calls sound out above a glitchy, spacey and surprising mid-section that is packed with warped, sci-fi nuances, turning this part into a trippy, vintage soundscape before returning to the hammering violence it bled away from. Chad’s vocals are outstanding and seemingly screamed forth from behind the restraints of a gagged mouth and gritted teeth and is particularly unhinged in the torrentuous closing moments where his seething howls boil over into a cacophonous uproar of chaos. I’d love to hear what Burden Limbs are capable of if they went full-on death metal for a song or two. ‘Flutters’ is the complete polar opposite. It’s delicate, controlled and mostly at peace with itself… beautiful in a way. The gently sweet, acoustic string plucks take you on a meditative respite as the airy atmospherics thicken with the song’s progression, leading to a satisfyingly clattering finale.

Title track ‘It Can Never Be Satisfied’ takes a devitalised trudge through a bluesy, muddy wall of melancholy with intricate layers of loopy sounds and musical madness bursting free from the downtrodden march. The track eventually further spirals into Pink Floyd psychedelia or the 70s fever dreams of a manic-depressive. It’s a fantastic track that is given life by realising the duality of its core theme – suicide – and the fact that you can only either resist it or succumb to it. The strangely lively and almost whacky sound effects are the resisting happiness to the contrasting succumbing to the sadness the main riffs convey… at least that’s what I got out of it. Strip back some layers of ‘Someone Pull Me Out of This’ and the basic bones of it could almost be a black metal track. There’s a very ‘trve’ feel to the crunchy, distorted guitar riffs as they are driven ferociously through densely packed instrumental noise.

It’s almost a burden to listen to It Can Never Be Satisfied and that’s absolutely no criticism as I think the band truly want the listener to be weighed down by this emotion. Its tremendous, choking weight holds you down and deprives you of feeling… until you begin to actually feel something. Catharsis maybe? A purge of the dread of life? Burden Limbs steeps you in the horrendous mire of existence and cleanses you free of woe. They’ll make you view yourself in the mirror and bash the pain right out of you.

The smoggy-thick atmosphere that runs throughout this album is as palpably distressing as each raw, fizzing guitar note, primal drum thrashing or tortured vocal. It all contributes to smothering you in discomfort and sending you spinning into a maelstrom of soul-aching malaise where facing your demons is the only way to rip that feeling from your bones. These guys can play and on a 2nd spin you’ll fully appreciate its intricacies. The lo-fi instrumentation and raw, impassioned vocals give their music a very personal touch, as if they’re playing in your head just for your misery. To benefit your pain or just prod at it, that’s up to you.

Previous output, the visually delightful live release In The Flesh, was the bands audacious statement of ‘we know what we’re capable of and this is what we can do’. It Can Never Be Satisfied is a thoroughly engrossing, if a little uncomfortable for some, debut album that displays exactly the talents that this band has, and believe me, you will be satisfied. I truly hope this will put the band on the map.