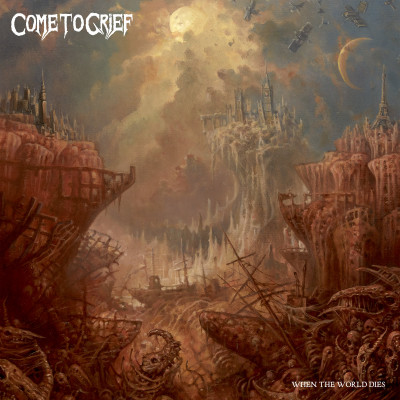 When The World Dies by Come To Grief

Come To Grief are masters of misanthropic and cathartic noise with plenty of sludge and doom elements encased in their sound. Their music acts as a perfect remedy to the utter clusterfuck that the world turns further into day after day and has done for some time now.

Formed from the ashes of the much loved Grief (whose debut album was notably titled Come To Grief), the band’s sonic assault captures a sense of hopelessness with venomous glee, but it is wrapped in a cleansing anger that you can feel throughout, and acts as a purge for the soul.

Come To Grief’s debut full length When The World Dies sees them salute their past but forge their music in an even darker and more depressive fashion.

When The World Dies is an aptly named album and if you want to listen to the sound of the end of the world in seven songs, then this is the album for you.

Riffs after riffs after riffs collide with blood curdling vocals to create a tidal wave of purifying hate and it sounds glorious. Songs like the menacingly atmospheric opening instrumental heaviness of ‘Our End Begins’, the insanity inducing groove of ‘Devastation Of Souls’, the triumphantly heavy ‘Bludgeon The Soul/Returning To The Void’ and the closing mournful grind of ‘Death Can’t Come Soon Enough’ are all perfect examples of the powerful impact that Come To Grief create with their music.

The vocals of Jonathan Hebert are berserk and unstoppable throughout and the epic riff led wall of noise that guitarist Terry Savastano along with Hebert makes is akin to an epic storm coming straight for you. Add to that the doom laden grooves that drummer Chuck Conlon and bassist Randy Larsen creates is what makes this album special.

Converge’s Jacob Bannon contributes his formidable vocals to two songs on the album (‘Life’s Curse’ and ‘Bludgeon the Soul’) and the production job by Bannon’s Converge band mate Kurt Ballou is faultless and really captures the power of Come To Grief.

With When The World Dies, Come To Grief have created an album that does pay tribute to their past but forges a future, however uncertain that may be, that is done on the band’s own terms and it is great to hear an album as purely hateful as this in 2022. This is a monolithic album and one to truly turn up loud and listen to as the entire world burns around you.