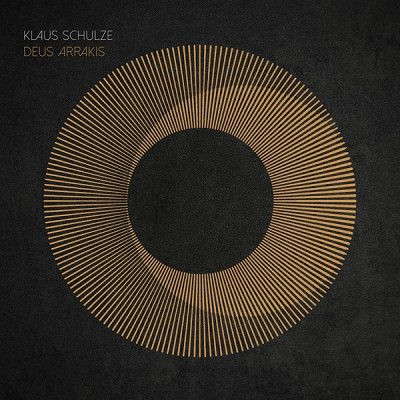 What a perfect send-off. Deus Arrakis is Klaus’ 47th and final studio release on the SPV label. This here is as emotional as how he takes the stories from Frank Herbert’s Dune trilogy into the harshest desert planet filled with spice and radiant blue cinnamon.

Since he released his 1972 debut Irrlicht on the Ohr label, Klaus Schulze wasn’t just a pioneer of the electronic music scene, he took steps and boundaries that were going to be this spiritual journey worth exploring. Whenever you put one of his albums on or his time with Tangerine Dream (Electronic Meditation), the first sole self-titled Ash Ra Tempel album and 1973’s Join Inn, collaborating with Arthur Brown, or the two Cosmic Jokers releases, Schulze was like a visual storyteller bringing his musical imagery to life.

Like David Bowie’s Blackstar, Deus Arrakis is his grand finale as he prepares to take his spaceship home into our solar system. From the moment ‘Osiris’ begins you get a sense of the sun coming over our home planet as the synthesisers lay down a sense of welcoming home our fellow astronauts who had a long 18 month journey on the planet Mars.

Schulze and his crew make the journey home with unbelievable results. There are moments where he sends us morse code textures and mysterious imagery that has some jaw dropping momentum. You can tell how much research has been done during the four-part suite while they were on the red planet for a year and six months.

‘Seth’ goes into a door filled with nightmares that have terror, reality, and video-game like scores. You feel the shakers coming in to make it sound like a train chugging as it takes its passengers on an adventure filled with mystery, twists, turns, and unexpected results.

And with cellist Wolfgang Tiepold being on Schulze’s train ride, he brings forth some of these interpretations during the spiritual sequences that have a lot of equivocations for what is to come and how to put these massive pieces of the puzzle together before time runs out. The very last section enters this dark, decaying world like something straight out of Tarkovsky’s sci-fi gem Stalker.

You can hear elements of Irrlicht as he brings the ‘Satz’ suite in full while the closing epic ‘Der Hauch des Lebens (The Breath of Life)’ closes the album with Eva-Maria Kagermann’s whispering vocal lines echoing throughout the composition. You can hear pieces between the sessions of Aphrodite’s Child’s 666, Goblin’s score to Dario Argento’s Suspiria, and the atmospheric sequence in Rush’s ‘Cygnus X-1: Book II (Cygnus, Bringer of Balance)’ from the Hemispheres album.

But once it starts to change, that’s where the passageway to the pearly gates of heaven start to emerge. Schulze has created this spiralling staircase that goes upwards to the clouds and are waiting for his arrival. From the moment he starts to build the staircase step by step, he knows that saying goodbye will be the hardest part to say farewell to.

Deus Arrakis is quite the ride. When I was listening to the album, I kept thing about that quote that Dr. Seuss once said; “Don’t cry because it’s over, smile because it happened.” And my take on what the doctor once said is that while it is hard that we have lost one of our loved ones, we want to remember the good times that we had with them and keep them alive. But the legacy and spirit will be with us for the rest of time.