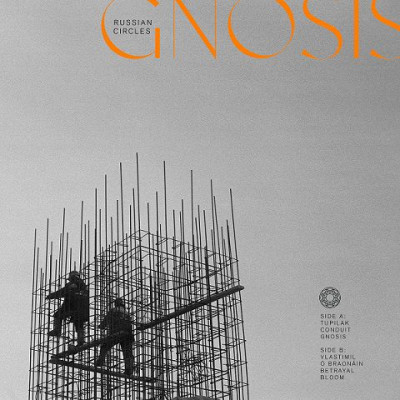 Opener ‘Tupilak’ rolls along like a heavy juggernaut over the bumpiest terrain, every thud of Dave’s drums reverberates round your head. Brian’s bass is on another level throughout this album and the awesome rumbling groove is immense. Sure this may initially feel like more of the same but the subtle nuances you get through repeat plays show the depth of the layers in the mix. The heft of the breakdown section near the track’s end is stunningly weighty and brain shakingly heavy. ‘Conduit’ ups the tempo with some jackhammer drums and galloping riffs. This is certainly the most fired up Russian Circles have been in a while, the savage intensity of the playing sets the adrenaline rushing.

Title track ‘Gnosis’ finally finds a quiet passage as the clipped clean guitars carefully lay out delicate melodic tones in the most graceful way. When Brian’s bass lurches forth it twists the melodics of the track into something completely different in the most genius way. When the track finally erupts into full splendour Mike’s guitars do that familiar sweep of glorious melodies while Brian’s bass tones sink to unimaginable depths.

The moment when Dave’s drums drop with a seismic clatter into ‘Vlastimil’ is incredible. The intensity of the drums and riffs on ‘Vlastimil’ almost hit thrash metal on the speedo. However the band still manage to switch dynamics with consummate ease, dropping into a sturdier groove before switching again to some complex technical rhythms. The final passage becomes a beautifully laid out melodic sweep of stunning intertwined melodies. Brief interlude ‘Ó Braonáin’ is a tender oasis of calm amidst the fury, Mike picks out a spacious melancholic melody on his guitar. ‘Betrayal’ drops hard with massive intensity, the band locked into a furious pummelling groove of savage heaviness. Brian’s bass absolutely throbs while Mike’s guitars drive punishing riffs that make his guitar sound like some industrial drill boring into the ground.

Album closer ‘Bloom’ is one of the finest tracks Russian Circles have ever recorded. Right from the get-go you get hit in the stomach as Mike’s guitar weeps the saddest notes over an atmospheric hum. Brian’s foot bass unit lurches in to add glorious depth before Mike absolutely breaks you with the track’s main melody line. Every play of ‘Bloom’ leaves me a trembling mess of emotions. I don’t know if it’s because the rest of the album is mostly violent in terms of playing and this is just such an overwhelming payoff at the end. The dynamic of the track is also one of the most adventurous the band have committed to as it’s bursting with twists and hooks. The final section of the track swells into something truly wondrous and it’s nigh on impossible not to find yourself have shivers down your spine, such is the majesty of the music.

Gnosis is a deceptive album, you might think after the initial play, that ‘Bloom’ aside, it’s another titan slab of Russian Circles just doing what Russian Circles do. But repeated plays show hidden depths and layers that are there to be unpicked to a willing set of ears. They’ve absolutely nailed the ability to create super heavy grooves and captured a depth across the album that I don’t think they’ve done before. The album absolutely demands to be played loud to get the full force of the mighty bass that permeates the album. It’s definitely Brian’s album in terms of the dominant instrument and as a bass player myself, I’m all for that. Having said that Mike’s guitar is hugely powerful, and Dave’s drums are as brutal and thunderous as ever. These three musicians are completely at one in terms of creating such absorbing music out of basic instrumentation. Gnosis finds Russian Circles in merciless mood and is for me, after Memorial, their finest album.