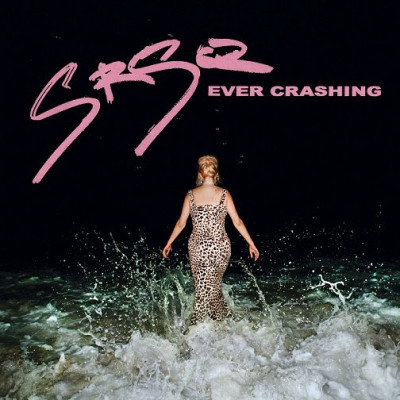 Ever Crashing by SRSQ

I can’t recall how I first came to hear of SRSQ (pronounced seer-skew), the name by which Kennedy Ashlyn releases her striking electro-shoegaze-pop crossover music. The song that grabbed my attention, the stunning ‘Temporal Love’, has the most sublime twisted melodies and sounds like it might have been recorded about 30 years prior to its release in 2019. Kennedy was formerly in the darkwave band Them Are Us Too with Cash Askew. Tragically Askew died in the Ghost Ship warehouse fire leaving Kennedy to come to terms with her passing at such a young age. Recently Kennedy was diagnosed as bipolar, with ADHD and this all makes Ever Crashing, her second SRSQ album, all the more remarkable. Produced by Chris Coady (Beach House, Slowdive, Zola Jesus), Kennedy’s influences are prominent (Jesus and Mary Chain, Cocteau Twins) but my word, does she have a way with melody.

Taking nearly three years to create, Ever Crashing takes its name from Kennedy’s recurring sensation of being trapped in the crest of a wave and the battles with being bipolar. Featuring guitars, synths, strings, live drums and the stunning theatrics of Kennedy’s amazing voice, the songs were delicately crafted using up to 100 separate tracks. The album proved cathartic for Kennedy as she explains “I became myself in the process of making this record”.

Kennedy has a strikingly pure voice and enchanting opener ‘It Always Rains’ showcases this over some lovely ambient synth tones and crystalline guitar. The yearning melody soars and when the song sweeps to a tumultuous conclusion and the flickering drums drop in, it is wondrously euphoric. The perfect pop of ‘Saved For Summer’ features quirky electro pops and claps forming a retro beat that underpins the lush swathes of synths, as Kennedy sighs out the glorious chorus. The “la-oo-wha-hoo” backing vocals are nothing short of magical as the percussion builds.

I do love a song that starts with the chorus and what a beauty of a chorus ‘Dead Loss’ possesses. The shift to the equally memorable verse is sublime. Kennedy swoops and soars like Elizabeth Fraser and it’s not that often you get to pass a compliment like that. ‘Used To Love’ drifts along on floaty guitars and a wondrous New Order-ish bass line. Kennedy tenderly sings “I know that you used to love me…tell me you love me” in the exquisite chorus and it is utterly heart breaking. Over a sea of icy synths, the defiant title track ‘Ever Crashing’ finds Kennedy nonchalantly toss out “it doesn’t matter anyway” as if the pain of the previous song has subsided into a stronger resolve.

Fuzzy guitars and tumbling drums infiltrate the chilling ‘Fear’. Kennedy flies high with glorious melodic ad libs when the instrumentation rises and builds. The kooky fuzz pop of ‘Winter, Slowly’ is the first hint of a happier melody, but I find the song sticks out a little awkwardly amidst the overall atmospherics of the album. The sweeping strings on the aching ‘Abyss’ are theatrical and lush, tugging at the heart strings. Little flourishes of twanging guitar pay homage to Julie Cruise and the Twin Peaks theme as Kennedy reveals “I’m high and I’m low, there’s no in between”. The Cocteau Twins are clearly an influence, none more so than on the charming ‘Ēlan Vital’ which features some shimmering guitars, wobbly bass and fantastically vibrant multi-tracked “la-da-da’s”. ‘Someday I Will Bask In The Sun’ blasts along on a jungle tempo take on a famous sampled beat (just can’t quite put my finger on what it is) as Kennedy teases out the most gloriously luscious melodies over swathes of synths and fuzzy guitars.

I’ve been eagerly awaiting this record for some time. Kennedy has been teasing us with songs released ahead of the album that pointed towards something rather special. Ever Crashing lives up to the heightened expectation featuring some glorious melodies throughout and layers of lovely synths, shimmering guitar and sumptuous bass lines. It’s rare to find a vocalist blessed with a voice like Kennedy, with the songs to match. Whilst the themes and events that permeate this album may have caused Kennedy some personal pain, the best art can be driven by suffering. Ever Crashing is bursting with brilliant melodies and is a mesmerising triumph against adversity.