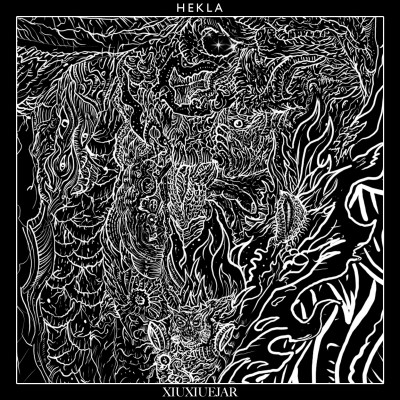 As autumn comes over the hill, Icelandic theremin conjurer Hekla floats another dark and haunted dream of a record out into the world. Xiuxiuejar swirls like mist across an empty landscape of black rock and cold water, but its sounds are not epic or windswept, it’s a space held in the mind’s eye. At first glance the title seems pointed and unpronounceable but Xiuxiuejar is a Catalan word meaning to whisper. It’s also an onomatopoeia so it sounds more like soft shushing which is entirely fitting for the music’s close, quiet, sharing of sighs and murmurs.

Her chosen instrument is best known for a technicolor space tone and so the opening seconds of ‘The Whole’ warble in b-movie style but its brightness quickly fades to gently overlapping waves as the hushed vocal comes in. A siren call of solitude “come to the hole, let it cover you up and blind your senses…” Hard to make out, it’s curiously affectless and yet seductive, comfort and dread held one in each fist. The second tune  ‘Silfurofinn’ turns further from the light, a lamentation over a fracturing drone. Lead single ‘Enn og Aftur’ (Once Again) is less welcoming still, theremin feedback crackling and howling, ominous drums from beneath the earth. “It kind of sounds like a dark January here in Iceland,” she says. Ice storms and endless night.

The record’s lengthy centrepiece ‘Sólin Gekk’ (The Sun Gone) settles in to that long dark night and dials down to something cold and delicate as frost. So much so that it’s a hard record to listen to without the clamour of the world wandering in. Ghostly music made of the air itself sighing and moaning, the sound of unseen forces in the stillness. Like field recordings of the eerie absence of birds it flutters and clicks and drips as the theremin channels their tired songs. It’s an exquisite melancholy.

‘Akkeri’ returns us to occult horror drone Hekla using cello to bring forth more guttural sounds. These grinding textures are heaviest on ‘Ris og rof’ the record’s most direct moment of menace where they are offset by looping drops of light. There’s a chill about the shoulders of this music but she doesn’t lay the creeps on too thick, it’s a gentle disquiet colouring the edge of the lulling softness. ‘Í Kyrrð’ features another soft vocal, spare wavering tones and the deep breath of sleep. Marking a still, empty, space it’s concerned with the sleep/wake suspension of insomnia.

‘The Hole’ completes the circle, alien theremin warble and an almost black metal incantation of the lyric from Óttarr Proppé. “come to the hole let it cover your eyes and blind you, underneath the thick moss you can sleep, take all the time you want…” I know I feel the pull of that a lot of the time, don’t you? It bookends the record although I think the just released video combines both versions into a more effective full length piece. Certainly the video itself clip provides a perfect visual analogue for the record. Eerily beautiful, a long lonely gaze into a calm dark pool. It’s going to be the longest winter of your life.