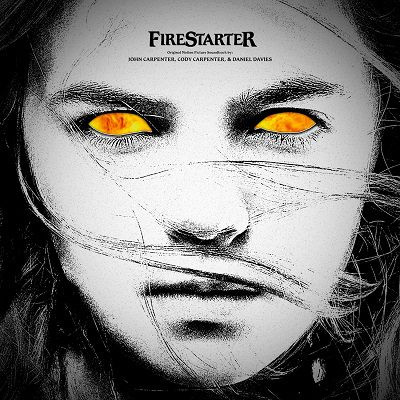 By now, as September comes to an end next week as we get ready to be in October and hopefully, the final saga of Michael Myers and Laurie Strode of Halloween Ends which comes out on the 14th, it’s time to delve into the scoring structures of the remake, Firestarter from John and Cody Carpenter, and their partner in crime Daniel Davies. Yes the remake thanked at the box office.

And I will be brutally honest about this, you can’t remake a movie that’s already done its job in 1984 based on the book by Stephen King, and starring Drew Barrymore and the music done by Tangerine Dream, but for the Carpenter’s and Davies, the score for the Firestarter remake is a whole lot better than the film itself.

Listening to the music is like witnessing something terrifying beyond our world filled with danger, and a city on the brink of collapse. There are those eerie atmospheres that the trio have created. Distorted ghostly-like vibes coming through a horizontal telescope, and you’re just waiting for the bomb to explode at any second.

Not only there’s the invoking sections from the Krautrock-era, Garry Schymann’s score to BioShock’s 1 and 2, and a sipping champagne drink to Mark Snow’s theme to the 1993 TV series, The X-Files, it becomes a post-apocalyptic warzone. And once you enter those territories, the doors shut. And there’s no turning back. Getting out, that’s the hard part.

You can hear elements of the original 1978 Halloween that John brings to the forefront with Nitzche’s score to Donald Cammell and Nicolas Roeg’s 1970 British cult classic Performance, and Brad Fidel’s music to James Cameron’s The Terminator, hanging in the balance. The three of them suddenly hop aboard this mysterious train that takes them to the electronic-dooming-metallic structure with a hypnotic trance before making pit stops to Mike Oldfield’s location.

Yes it’s very different from the original film and taking a massive route from what they’ve done, but the trio have delivered a brutal, sombering score that’ll keep you on the edge of your seat.