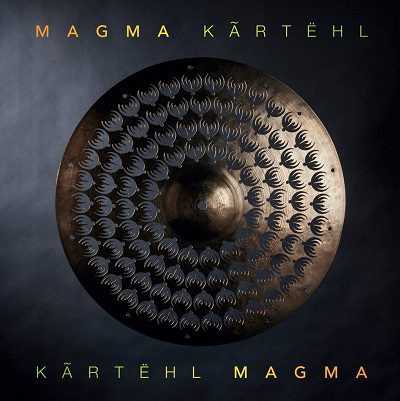 Two years ago, everything was normal. Concerts, venues, people going to movie theatres and see their favourites on the big screen and in IMAX, it was just another day. But in March of that year, everything came to a screeching halt when the pandemic and COVID-19 hit. Lockdowns, schools were taught online instead of being in the same class, drive-in movie theatres were coming back, and bands and artists at times were doing performances in empty venues and various locations on livestream.

For Magma, once the situation happened, they took a long break for about 18 months to come up with new material after the release of their ZËSS album. With a new line-up, they have decided to light that fuse once more as they followed it up with K​ã​rt​ë​hl.

This albums proves that the Zeuhl maestros are bringing more magic inside their bellies with flaming fires, continuing to burst out more ideas that Christian Vander and his bandmates, have cooked something delicious for its listeners. And the meal with six courses that are on the menu, are a special treat to see what Magma have brought to the dinner table.

From the moment that Jimmy’s bass does a shaky groove on the opening ‘Hakëhn Deïs’. you get a sense of an operatic complex between Stella, Isabelle, Sylvie, Caroline, and Laura create. There’s the soul connection when they get down to business while Rudy shares a melodic cruise, followed by some call-and-response arrangement.

Between the midsection pieces and the ‘Rhapsody in Blue’ vibes, they come forth together as a team. ‘Do Rïn Ilï Üss’ returns to the latter periods of Attahk and Udü W​ü​dü with an iron fist, followed by a Zappa-like change from the Hot Rats and One Size Fits All-era channeling both ‘Peaches En Regalia’ and ‘Inca Roads’.

With a Vince Guaraldi twist, you can imagine the Peanuts gang are dancing to Magma’s music and trying to follow the Kobaian language which can be tricky, and very challenging to them. ‘Irena Balladina’ takes us into the warmest northeast region of the fourth-largest state of Brazil, Bahia. You can tell that the band need a sunny bossa-nova groove into the song.

And believe me, once the romantic paintings, landscapes, beaches, and the Church of the Third Order of Mount Carmel come to life, the music fits the scenery very well. But just as they start to calm down, they return to revisit the spirit of John Coltrane on A Love Supreme and Live at Birdland on ‘Walomëhndëm Warreï’.

It’s one of their darker compositions that hits you in the face with a hardcore punch. You can vision the looting, graffiti, riots, and protests with disturbing imagery from around the world. And the elements go into a massive attack after the peaceful beauty on the first two minutes and twenty-eight seconds.

You can imagine yourself being in that warzone whilst Rudy and Christian set up these elements on the score as the vocals have a crying sequence as if praying upwards to bring hope and understanding throughout the flaming fires that surround them. Hearing ‘Wiï Mëlëhn Tü’ is like a spooky cry to the gods on a loop nonstop.

With Aknin and Rudy, who are ready to climb upwards to meet the mysterious guru that people talk about, the snarling monster itself is waiting for the right moment to attack at any second before the band members head quickly inside the Egyptian tombs once more and make sure that the coast is clear. Then, it segues into a gospel-like celebration at the closing track, ‘Dëhndë’.

Christian sings a bit of English in the song. You can imagine yourself every Sunday morning at the Church of Magma, jumping for joy, and having this incredible service, church goers will never forget.

There’s elements of ‘Retrovision’ that comes to mind by reprising sections of the piece to close out the congregation as they head outside for that cool, refreshing Autumn air that awaits them until they reach the climatic end to the mountain top. The two bonus tracks recorded back in 1978 are demos from Christian’s personal collection of the first and sixth track of the piece.

You can tell that it’s a work-in-progress of the songs on where Christian wants to take these pieces of music to life with more of his operatic styles, and mid-fast scatting textures from Rene. K​ã​rt​ë​hl has proven that Magma aren’t backing down, without a fight. And the result on this bad boy, has more continuations of the classical, soulful, and jazzy-like approach that’ll keep the machine going, forever and ever.