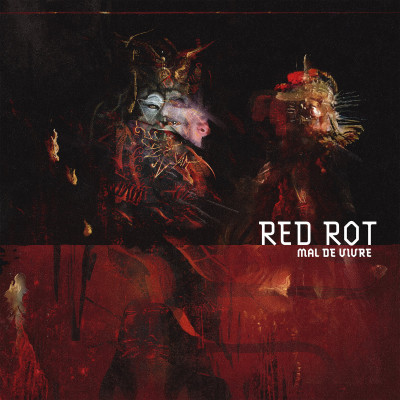 Italy’s defunct professors of experimental jazzed-up black metal, Ephel Duath, were once a large part of my early metal upbringing and a segue to heavier, darker sounds. Their earlier releases specifically were on constant rotation on the old disc player and their wildy avant-garde and colourfully grey music certainly captured my attention. So, you can see why the prospect of new music featuring two of the old members piqued my interest.

Red Rot is the new lifeform born from the forgotten ashes of Ephel Duath, featuring Luciano Lorusso George and original member Davide Tiso. Fattening out the line-up are Botanist/Dawn of Ouroboros drummer Ron Bertrand and Ian Baker on bass, also of Dawn of Ouroboros.

As the world fell into the pandemic void, Red Rot was conceived and debut release Mal de Vivre was recorded… that awesome cover looking like a piece of AI generated art is (insert Michael Rosen meme) “nice”! Ephel Duath’s music was at times hard to pigeonhole and whilst there is a smidgen of that intriguing palette still here, this new music bleeds a more sulphuric anger and lands Red Rot in more straight to the point blackened hardcore territory. Mal de Vivre showcases a whopping seventeen new songs of raw and energetic metal for fans of Converge and Voivod, to name a few.

The head-splittingly atonal ‘Ashes’ begins the album with a crawling slab of technical metal, with jarring, ear piercing angular guitars and a few wrecking bursts of skin pounding, cymbal clattering blastbeating. It’s an immediate statement that gets you salivating. ‘Near Disaster’ introduces gothic elements akin to Paradise Lost, whilst the proggy ‘Conversation With The Demon’ is grotesquely ballad-esque with a gorgeous blasting finale and ‘After The Funeral’ goes so full-on into the doom and gloom of My Dying Bride you’ll think it’s Aaron Stainthorpe who’s come to dig you your grave.

‘Alpha Predator’, ‘Greatest Failure’ and ‘Behind The Secret’ deliver a whacking, meaty punch of hardcore aggression with a few wicked outbursts of old-school death metal. Album highlight ‘Gruesome Memento’ is a delightfully sinister slither into avant-garde darkness, which wouldn’t be too out of place on a black metal album, especially with that blistering blastbeat and downtuned tremolo assault midway. The smokey, synthesised instrumental closer ‘Peregrine’ is another album highlight, with a few simple, repetitive notes and a glimmering key tap or two it’s amazing what beauty this evokes.

One (very) minor criticism I could give would be that a few of the tracks don’t stick around long enough to begin to overstay their welcome. They are a flash of an idea that ultimately has no fulfilling payoff due to their short length. Tracks this short work better in the world of grindcore where that feral burst of screaming over razor guitar work and pummelling blastbeats suits better in quick and sharp shocks of merciless noise. There is no real warrant for the diminutive size of several tracks apart from each being just a passing thought that needs expression… but maybe that’s the selling point.

Mal de Vivre is nonetheless a cracking album full of mini belters, gargantuan riffs and a heap of future potential. I praise these guys for knowing their own sound and riding it through seventeen creative tracks. Lyrical themes spread through the veins of mental darkness, psychological abuse and illnesses but leave room for some fantastical play that doesn’t take itself too serious, such as ‘Undeceased’ and the monstrous ‘Everlasting Creature’. Red Rot and Mal de Vivre are overall a welcome delight and honestly it’s great to see these guys back.