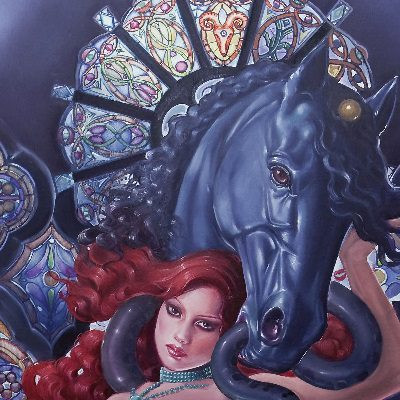 When I think of music, I think of going through my Beatles collection when I was very young thanks to my Mom’s introduction to their music. For me, I want to hear music that is strong, in your face, and gets right down to business. Whether it’s Rosalie Cunningham, Pink Floyd, Diablo Swing Orchestra, Steven Wilson, or Markus Reuter, that’s the kind of sounds I want to hear, and none of the so-called pretentious boy-band bullshit and that top 40 mainstream radio of hearing the same crap again and again.

That’s why I stopped listening to the radio at times of hearing the same songs all over. And for a Norway duo like Sonisk Blodbad (Sonic Blodbath), they bring in the essence of ominous textures, Berlin school of music, post-punk, and post-rock sounds, it is the perfect choice of music that we need for 2022. Launched back in 2010, they know their music history very well. Taking aspects from the krautrock genre, Floyd, Joy Division, and Bowie’s Berlin trilogy, this was like nothing I ever heard. Where has this sound been all my life? This is the right moment at the right time to make it the soundtrack for the pandemic and the craziness that surrounds it.

And for their latest release on the Apollon label entitled The Shores of Oblivion, this is where they really get the ball rolling. With an incredible exotic album cover done by Italia Ruotolo entitled “A Blue Trip-Tych”, imagine that being used in one of the next issues of the adult illustrated fantasy magazine of heavy metal. The album itself, is like walking into the insane asylum as the inmates taking over the asylum with an iron fist.

From the swirling nightmares of wah-wah pedals going crazy of the opening ‘Sonisk Blodbad #4’ which features archives from the late Conrad Schnitzler, has all of the intensive fires burning from drum patterns and Atari-like synths that’ll make you think of Suzanne Ciani at times while the tribute to the synth-punk band Suicide entitled ‘Alan Vega 2.0’, performed by guitarist Nils Wohlrabe and vocalist Niklas Rundquist, takes you into Tarkovsky’s vision of Stalker with brutal heavy industrial music that becomes a free-for-all hay-wiring effect!

Meanwhile, ‘Photons’ features original member Haavar Tveito to lend his fellow comrade a helping hand. It takes you back into the brutal thumping heart beats from the electro drums, then strikes the thunders of Bauhaus’ arrangements with a wolverine whose as angel dust. He gets ready to launch the next attack on eating human flesh like there’s no tomorrow with unbelievable gory results.

Just as the first three tracks are mind-blowing and out of this world, Blodbad take a breather and dive into the latter-Floyd sections of The Division Bell on the arrangements for the title-track. You get a sense of being free from all of the craziness that just happened, and the vocalisations get a glimpse of what is happening over the horizon that is quiet, calming, and a sense of relaxation.

Then, the thunderstorms hit as you run to the nearest house, very, very fast. You can feel those massive arrangements of synths and electro-drum beats coming at you as we head towards the ‘Dark Clouds Passing By’ and the Vangelis-like atmospheres of ‘An Echo in the Dungeon of my Heart’. You can vision the reflections of childhood, abuse, and learning how to fight back and move forward with your life, whilst letting go of the past and thinking about the future in the years to come.

The 11-minute ‘Aspik’ is Sonisk’s tribute to the three composers; Philip Glass, Steve Reich, and Terry Riley. Here, the music has a strong alarming sense of climbing upwards to witness the light at the end of the tunnel with some challenges that come along the way.

And once they reach towards the top, they get an amazing view on the heavy journey they’ve embarked on. And then afterwards, their lives will never be the same. And it’ll be a giant massive scar, that’ll haunt them for a long, long time before closing it out on the 24-minute Tangerine Dream-sque beauty from the cavernous worlds of the ‘Blue Triptych’.

Sonisk Blodbad’s music may not be everyone’s cup of tea per se, but the Bergen duo have brought this massive challenge that’ll be repeatable listens whether you get it or you don’t on The Shores of Oblivion. But what they’ve done is to take listeners on a big meditating summons that’ll not only be disturbing, but being a part of the ride that awaits them.