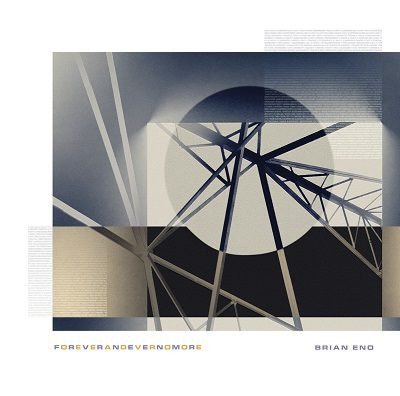 For 50 years Brian Eno has been around writing, creating, and producing music like a flaming fire that’ll never burn out. From Roxy Music, solo career, collaborating with his partner in crime Robert Fripp, and producing bands and artists such as; Talking Heads, Devo, David Bowie, Robert Calvert, and Harmonia, Eno takes listeners to a whole new level of going beyond the pushing envelope by hitting it with a giant battering ram.

Whenever I would listen to his albums from Here Come the Warm Jets, Taking Tiger Mountain (By Strategy), and Apollo: Atmospheres & Soundtracks, I’m taken to different images that he would envision on the screen. Through glam, experimental, ambient, and art punk, Eno is a man that goes through various genres.

Here on his 22nd solo release Foreverandevernomore, took me on a whole other level returning to his vocals levels for nearly 17 years. You feel as if you’re inside someone else’s dream.

What Brian wanted to do on his new album is exploring his own take of the themes of exploring the super-rapid rate on feelings. The beginning of thoughts, body’s reaction to the subject, and the telescopic view on what the conscious brain is getting into.

And to be allowed to have his daughter Darla sing on his album, it shows the true bond of a father-daughter relationship he gives to let her come into the light. On ‘Icarus or Blériot’, there are bleak visions on what’s to come in the 31st century.

Revealing a hypnotic blend of a poetic lyrical structure, there’s the Twilight Zone vibes from the intense vibes of Pink Floyd’s ‘Marooned’ and Tangerine Dream’s Force Majeure hanging in the balance that strikes a terrifying world, and will make you think of the labels; Ohr or E.G. Records.

When you watch the video of a snarling, ominous, and lullaby-sleep of ‘We Let It In’, Darla’s angelic hymn gives her dad a chance to let all of the demons you had from childhood, come front and centre. It is time you confront it for the last time before the sun comes through the dark, grey clouds. The opener ‘Who Gives a Thought’ reveals a steampunk Victorian setting of a world in chaos.

The swarms of the fireflies, lifting keyboards, and ghost town-like guitar lines, Eno looks down at the city below, witnessing of a dangerous warzone that has become impossible to get out of. Eno’s vocalisations have turned into a sense of mourning, into a dangerous corruption that brought into the fall of the city.

‘Garden of Stars’ begins with a monk-like march into the decaying aftermath of war, then walking into the territories of the first two Cluster albums, and Klaus Schulze’s Irrlicht. It becomes a swarm by building the walls with intensive heat before it halts with massive synths that are dropping down like missiles falling down from the sky.

‘Sherry’ visions Brian in a futuristic smoky jazz club in the 1950s in a pre-Leonard Cohen remembrance of the tragic story of a complicated woman who tried to stay away from the spotlight, but she pays the ultimate price at the very end as fame, drugs, and fortune, and you’ve got massive amounts of trouble destroying your body, nonstop.

‘There Were Bells’ has an atmospheric texture of a Gershwin opera, setting up this scenery of an old and lonely man, being stuck in this lighthouse, for decades, knowing that his time is near. He gives one final rite to the gods by reaching his hand with rolling timpani sections, and saying farewell to his loved ones.

One of the key tracks ‘I’m Hardly Me’, is Brian’s return to his 1975 release Another Green World. He reprises sections of the title-track by adding lyrics to the song in a melodic way while ‘These Small Noises’ has these female-like voices, setting up this minor-like arrangement of an abuser’s dark side form all of the disturbing shit he touches, will have massive scars from the victim’s back, that’ll be here for a long time.

And while it goes through an eerie carousel-like finale, the damages that the abuser has done, the blood will be on his hands for a long time. And it’s going to be an old rotting wound that’ll never wash off.

‘Making Gardens of Silence’ closes the album with a state of tranquility. You can vision the sense of robotic voices, walking through the rubble that the citizens once view this one great utopian world, is in a world of decay. Now they’re starting a new chapter in their lives to another location. But the nightmares will stay with them for a long time.

Foreverandevernomore may take a while to accept Eno’s new album. It’s his fullest assumption to bring something unique in his garden shed, a view of a dark future and coming back for more all of the expeditions, he’s encountered.