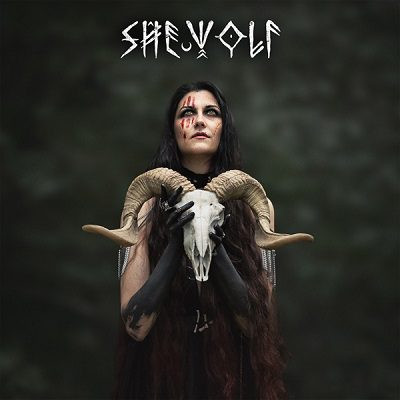 Wow! Where in the hell did this come from? This is almost like a giant cannon blast waiting to happen. That band is SheWolf. Built around by the powerful vocal lines of Angel Wolf-Black (Bare Infinity, Vivaldi Metal Project), their music is a combination of power metal, symphonic structures, and folk-like melodies that are filled with excellent ingredients for their sole self-titled debut.

This is probably going to be one of the most cinematic and fantasy-like structures that’ll be around for eternity. With Angel’s help from the unknown wolves of The Hunter (Guitar), The Alpha (Drums), and The Predator (Bass), they are Angel’s protects. No matter what happens, the unknown wolves are like a band of brothers protecting their young cub through the heavy centrepieces that await them.

From its Jethro Tull-like intro that speaks of Songs From the Wood-era, the pack brings in all of the massive fires they have inside their veins by marching into battle on ‘The One You Feed’. Angel leads the charge in her vocal styles as The Hunter bursts through the doors down with a hardcore punch.

You get a sense of Within Temptation’s Mother Earth-era with Ian Anderson handling the production levels before going into a fierce-like rage by be
ing greeted with warm handshakes to a big combination of thrash metal, NWOBHM (new wave of British heavy metal), and the epic-like battles on ‘Welcome to the Pack’.

Take for example, ‘Lone Wolf’. Angel becomes a fighter in the song. She’s not backing down to no one in this operatic metal piece as the pack give her a chance to come forth, letting the enemies get closer as she attacks them with a brutal force in the first two minutes. Just as the majestic flute flies overhead in the song, her sword kills one bad guy after another, channeling both Blind Guardian and Queen-like vibes that are coming out of the blue.

Then, just as the pack are getting ready to get some sleep, the fight for survival in the middle of a heavy snow storm comes bursting through by reaching ‘Home’. Angel mushes the pack as they go through the danger, jumping the highest mountains, and seining their glimpses of something familiar over the horizon.

The Alpha is like a stick of dynamite, ready to explode. He takes his drum exercises to an ergopower assault on the ‘Moonbound’. Between him and The Hunter, they work well as a team, duelling with each other by practicing their next attack that awaits them as they reach the next town that’s going through another set of war’s that’s happening.

The five tracks bring the quartet to a whole level of respect for one another. While there’s an operatic form in each of the songs, Angel is very much like a storyteller. She brings the imagery of war, fantasy, and unbelievable action that is right in front of your flat-screen TVs. And we ain’t talkin’ about World of Warcraft, Lord of the Rings, and Dungeons and Dragons, Angel brings those ideas to life and will probably get some recognition from social media and comic-cons in the near future.

‘Safe in the Dark’ is the calm after the storm. The band are in this sheltered area and going through this intensive heat. The epic attacks that they do is letting all of the anger pour out inside of them whilst Angel breaks up the fight, and letting them know what’s happening to themselves and each other.

It’s like a ticking time bomb waiting to happen between the three members as they put their differences aside as Angel fights back tears in ‘Nothing is Forever’ and the pummelling beats of ‘My Prayer’. She spreads her word of mournful ballads throughout the lands of peace and letting everyone know to put their weapons down, and let the fighting end, once and for all.

‘The Thrill of the Chase’ returns to the routes where Iron Maiden had left behind for SheWolf on the sessions from The Number of the Beast. They plan to go out in a blaze of glory by ending with the senses of relief. But the giant scars after they returned home, will be there for the rest of time on ‘Fallen Without You’. As the early symptoms of P.T.S.D (post-traumatic stress disorder) will be there as the nightmares continue to haunt them.

SheWolf has all of that energy right down and centre from their incredible debut. Its one story-song after another that will keep you on the edge of your seat, not knowing what will happen next in the following sequel. And this here will be the adventure film that we needed, for a long, long time.