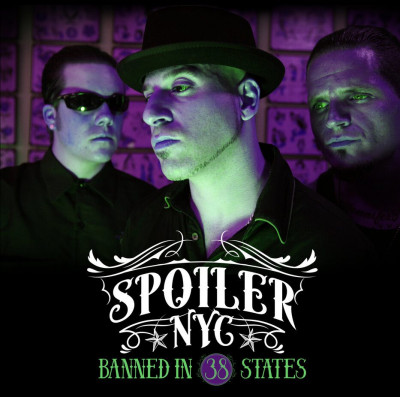 Banned In 38 States by Spoiler NYC

The late seventies incarnation of punk has tossed and turned through decades and some point became post-punk, whatever that term includes, and it certainly includes quite a lot of things.

On the other hand, ‘the carriers of the original flame’ as we may call them seem to be somewhat dwindling, even though the music of ‘the originals’ and bands like Rancid, Social Distortion and the Misfits is still high on the list of the listeners that want their sound fast and raw.

Now, here come Alan Robert and his Spoiler NYC with their latest album Banned In 38 States, to carry the torch of that initial raw punk sound.

Robert is no stranger to the punk scene, as he was the co-founder, bassist and primary songwriter for Life of Agony (LOA recently announced a world tour to celebrate 30 years of their cult-classic debut River Runs Red).

Now, in a trio with Chris “Junkyard” Selletti on guitar, and Tommy “The Kid” Clayton on drums he is out there to rekindle the spirit and musical concept(s) of the original seventies punk.

As somebody who definitely knows what that seventies punk sound is Robert is able to bring that raw, unabashed sound to a full tilt, investing the original sense and emotion and not just going through the motions without any true feelings. And latter is probably the reason Banned In 38 States works.