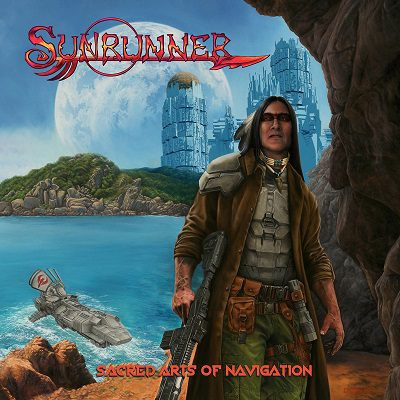 Sacred Arts of Navigation by Sunrunner

Formed in 2008 in Portland, Maine, Sunrunner are a heavy prog metal group that they don’t get down to business, but bring in more live ammunition with massive amounts of fire power to get the train running. Four albums, three EPs, and an official live bootleg recording, Sunrunner have heighten their vantage fourteen years later.

The darkish parallel universes of the ‘Faraway Worlds’ has incredible riffs, dooming arrangements, mid-beast vocals, and unexpected sailing to shore finales that’ll make you want to dig out your Candlemass and Electric Wizard LPs and play them again and again. Just close your eyes and vision these two bands, collaborating a triple album with pure sludge, and pure time-bombing metal at its best!

They show their softer side as they break out their acoustic instruments by giving their electrical outlets a break. From the bossa-nova sambas on ‘Last Night in Tulum’ with an earlier Floyd approach in their underground years by setting the landscapes in the city of Baia, to the Zeppelin-sque folky arrangements of a stomping dance beat for an ‘Acadia Morning Ride’.

You can imagine the quartet are having a blast making this album, and bringing those beats per minute throughout their music. Then, they head into the crossover textures of the Bay Area thrash scene, followed by the NWOBHM movement by entering the hot blistering sun with more riffs, dooming bass work, and rise from the grave workouts on the ‘Obstacle Illusion’ and the ‘Invisible Demon of Ideology’.

Joe hits those jugular vibes by giving Bruno, Ted, and David, coming in at the right moment in the signal structures by giving them directions on where he wants them to come in, and come out. And once you reach the top of the mountain, there comes a moment where you have to make a screeching halt.

It’s quite an achievement for Sunrunner to let each other know they have each other’s back. Listening to their music, made me look back in time of listening to another prog metal group called Heart of Cygnus. They reminded me of that band when I listened to their album. It has a refreshing taste of what Prog Metal is supposed to be. No cheesiness, no clean-cut nonsense, but straight down the line, and right in your face.

So buckle-up and prepare to be on a course for Sunrunner’s roller-coaster ride that’ll knock all of the rides at Disneyworld like an atomic bomb waiting to explode.