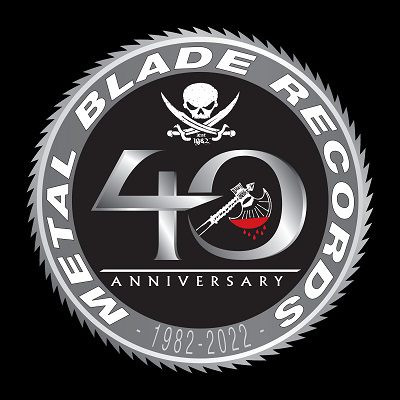 Whenever I would read an issue from PROG Magazine, I know that something would peak my interest for my ears to embark on. Whether it’s the Limelight articles, or the reviews from Jerry Ewing, Jo Kendall, Sid Smith, the late Malcolm Dome, or from the psychedelic underworlds of the mind-expanding music that Rob Hughes would seek out, it’s like searching for more hidden treasures beyond the Floyd, ELP, Porcupine Tree, and Yes ornaments that wait for me.

But this time, they continue with the previous digital sampler, featured in issue number 133, covering Kate Bush’s top 40 songs thanks to the usage of ‘Running Up That Hill’ in Netflix’s Stranger Things for its fifth season. But it’s more than just the resurrection of Kate Bush’s music. This time, the digital sampler embarks the 40th anniversary of Metal Blade Records.

For Brian, growing up as a fan listening to KWEST in FM Radio in Los Angeles, listening to bands such as KISS, Judas Priest, UFO, Black Sabbath, and Deep Purple, this was the music that he grew up on, by turning into a Metalhead. Then, he started the first ever fanzine in the States entitled “The Heavy Metal Revue” covering Iron Maiden after hearing The Soundhouse Tapes from a friend in Sweden, and then having a dream job that he always wanted by working at a record store.

But when it came to a compilation, because of the scene in the City of Angels, Slagel knew that if he didn’t do something, these bands wouldn’t exist. And so the Metal Massacre compilation was unleashed introducing bands such as Steeler, Bitch, RATT, Malice, Cirith Ungol, and of course the one that started it all, Metallica. And as they say, the rest is history.

Now, Metal Blade has reach the ponds of the progressive underworld from The Ocean, Between The Buried and Me, Cult of Luna, Fates Warning, and Nova Collective. The label still continues to evolve throughout the industry and not removing from their independent beginnings in 1982.

According to the article about the sampler Slagel always has a different approach beyond the boundaries of metal. “I’ve always liked a wide variety of sounds in metal, which I think is reflected in our roster, and I’ve never gotten into trying to sign a lot of bands that sound the same. I would personally rather find something that nobody else has heard of before, something that’s really different from what’s going on, and put that out.”

And these enduring pieces from the sampler, would make you want to take note of what’s been brought in for your home-cooked meals to go bat-shit crazy! The steaming sounds of the drum kit, makes it an intense industrial work out for the first two minutes by Cult of Luna, pouring out their screaming vocal lines with post-rock attitudes channeling The Dillinger Escape Plan, but with a spaced-out doomy approach for the ‘Cold Burn’ to happen.

Master Boot Record’s ‘80486DX’ will make you think of the 1971 George Lucas film title, THX 1138 at first. It has a synthesised post-punk workout that brings to mind Suicide, krautrock legends CAN, and the maestros themselves Ultravox with some Thrashing attitudes, followed by apreggiated licks that’ll put you in the infinite stories from the adult illustrated fantasy magazine, Heavy Metal.

Now this is where the battering ram is needed to burst the doors down so hardcore, you need to turn this mo-fo up for the Cult of Lilith to come swinging in. With their approach of the symphonic death metal genre, you have rapid firing drums, snarling blood-thirsty vocals, harpsichords, and powering riffs that’ll make your arm hairs go up on ‘Cosmic Maelstrom’. Man those guys can play like there’s no tomorrow.

It almost made me think of the 2019 video game, Blasphemous that is set in the nightmarish world of Cvstodia. And their music fits the scenery so well, you can just imagine the alternate soundtrack of the game as The Penitent One confronts the monstrous figures throughout the story.

Next, we head to Denmark as IOTUNN takes us on an epic turned opera-like style with the powering materials of the symphonic genre that is brought upon the sampler by going for the Jekyll and Hyde textures. Clean turned hectic vocals with a journey through ‘The Tower of Cosmic Nihility’ as Between The Buried And Me channel the unexpected time changes with a nod to Dillinger, Haken, Queen, 10cc, and Gentle Giant rolled into one giant smoothie by taking ‘The Coma Machine’ right in front of our very eyes.

Things start to take a route when both Nova Collective and Native Construct turn the Prog genre up a notch to continue with those insane time signatures honouring the Grand Wazoo of Sheik Yerbouti’s, Frank Zappa. ‘Dancing Machines’ and ‘Come Hell or High Water’ are two of those tracks that’ll make you swim in uncharted waters as the danger awaits us for the Yellow Shark to occur in various places with crazy twists and turns.

Oscar Wilde once said, “Art is the most intense mode of individualism that the world has known.” Between the elements that are exciting, disturbing, stimulating, and stretching the landscapes of both prog and metal, Brian Slagel knows his musical tastes very well. It may take a while to get into the digital sampler, but for 40 years on, Metal Blade Records is still growing stronger than ever.