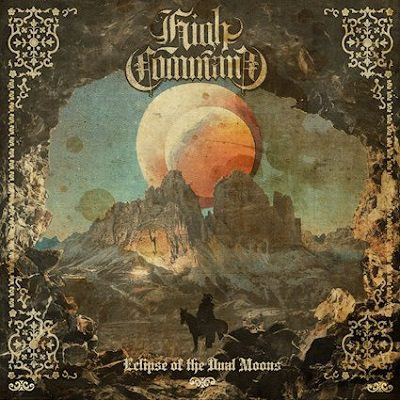 Eclipse of the Dual Moons by High Command

When I think of metal music, I actually think of the senses of relief that listeners dig into. If you want to play it loud, then turn it up to 11. Yes it was ridiculed by the so-called rock critics during that time frame between the ‘70s and ‘80s, parents, Christian leaders, etc. but it helped us go through the moments whether good or bad, Metal is always there for us. Then, forever, and now.

But when it comes to Massachusetts’ own answer to the thrash and death metal scene, High Command have been around for six years. And let me tell you something, the guys are fucking good. They get down to business, no bullshitting, and straight to the point.

Their latest release Eclipse of the Dual Moons, follow-up to their 2019 debut Beyond the Wall of Desolation, they’re like a ticking time bomb waiting to explode. You can feel the panic, the terror, and the blast of heavy guitar riffs coming at you, full speed!

And this is only just the beginning. ‘Fortified by Bloodshed’ keeps the heavier orientations, but starts with a prog-rock-sque organ intro for the lavas to burst at any second. There’s something BigElf about this track as if front man Damon Fox lends the quintet a helping hand during the time he was working on Cheat the Gallows.

You get a sense of soldiers, wounded, exhausted, bloodied, and knowing that they’ll never be the same. And once they come home, that’s where the nightmares will haunt them in the years to come. The last section of the song, that’s where all hell has broken loose as they began to lose control.

Then, the boulders start to burst as the blood fest begins on ‘Immortal Savagery’. McArdle plays with a lot of anger, attitude, and ruthless overtones that gives Ryan and Kevin a chance to come out swinging by bringing in the big guns, and letting the merciless beast to attack the town like there’s no tomorrow.

The first minute and one second of ‘Imposing Hammers of Cold Sorcery’ begins with an eerie spaghetti western. You could almost feel a pin drop at first, but once the earthquake rumbles at your feet, High Command takes you into the battlefield. Fitzgerald is a monster with his ferocious textures.

He channels Voïvod’s Denis “Snake” Bélanger by entering the territories between Rrröööaaarrr and Dimension Hatröss, knowing that the unsung heroes of Thrash deserve a lot of recognition. But it’s the closing 11-minute climatic epic ‘Spires of Secratha’ that brings everything to a climatic end.

Once those doors close behind High Command, there’s no turning back now. You have the doom elements, bits of the proggy textures, and crying to the god sections to destroy the enemies with a massive amounts of hardcore weapons to raise hell like there’s no tomorrow.

Not to mention a little twist where they pay homage to Black Sabbath’s Heaven & Hell-era where they honor the late, great Ronnie James Dio while the mournful, classical textures between Ennio Morricone and Peter Green’s Fleetwood Mac period during the second part of ‘Oh Well’ comes together as the band closes it down in gridlock form.

It’s quite a ride to hear something stronger and playing their hearts out in a true metallic, no holds barred approach. High Command have delivered the good as they come back with enough pounds of meat to cook.

And we ain’t talkin’ about turkeys, mashed potatoes, green beans, and corn on the cob nonsense for Thanksgiving, I mean a real BBQ feast that the band have unleashed to serve and dig in.