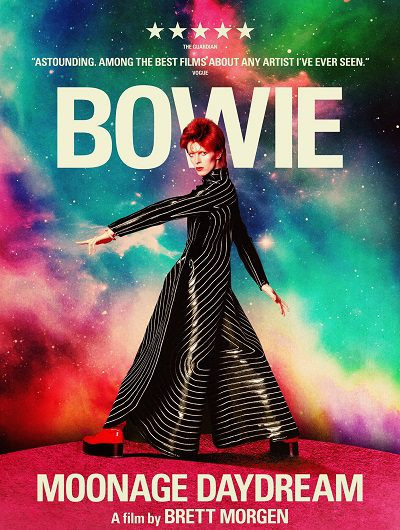 Where to start? Where to begin? It’s quite a tricky answer to respond. It’s been six years after we lost one of the true visionaries, and the maestro of moving forward and never looking back. That man is David Bowie. Bowie was one of those artists that always wasn’t just about fashion, about music, or about art, but a human being that was describing audiences on the deeper feelings they were about to go into this formidable mystery.

The new documentary from Brett Morgen (The Kid Stays in the Picture, Chicago 10, Crossfire Hurricane) released this year entitled Moonage Daydream, is a 2-hour and 14-minute adventure of how Brett envisioned David’s globe in the film from start to finish. It’s a movie that takes you on the edge of the cliff and preparing yourselves to revisit an old friend you haven’t seen in a long, long time.

And for Brett, he didn’t just want to make a documentary or a bio-pic, he wanted to take David’s story a spectacular journey for audiences who were part of his legacy, or newcomers who are discovering his music for the first time. From the moment the song ‘Hallo Spaceboy’ begins from his semi-comeback album Outside released in 1995 where he became weird again, it takes a life of its own.

We go to his farewell concert at the Hammersmith Odeon on July 3, 1973 where he retired his persona Ziggy Stardust. Most of the sequences in that film has some alternate angles including a moment where Jeff Beck joined The Spiders from Mars during ‘The Jean Genie / Love Me Do’. You can tell that Beck and Ronno are having a blast together during the song, knowing that there was chemistry between the two guitarists.

Intercut with films from the ‘50s sci-fi flicks such as The War of the Worlds, concert footage from the Rainbow in 1972, Mick Rock’s striking photography of Bowie in action, and the artists that inspired him from Fellini, Fritz Lang, Stanley Kubrick’s 2001 and A Clockwork Orange, and interaction with fans on how much Bowie meant so much to them.

Morgen does the opposite. He’s not playing the “bio-pic” game, he puts it out there and shows you the full crystal ball of what David did in the past, present, and future. There’s also a chance of getting out and reaching the light at the end of the tunnel.

In one of the sequences with Garson’s frantic piano work on ‘Aladdin Sane’ in the background, there’s a moment where we go from his paintings, film excerpts from The Man Who Fell to Earth, and the corruption and nightmare of his experience in the City of Angels during the Diamond Dogs tour.

It’s almost as if he wants to get out of the city and reinvent his life before he moved to West Berlin with Brian Eno in the late ‘70s. Watching that footage of Berlin, it’s re-visioning the future, it has that Fassbender-sque atmosphere of people in the city, photos from the Berlin trilogy with Eno and Robert Fripp during the making of the Heroes album, and rehearsals for the Earls Court performance on June 30th, 1978.

David Hemmings’ footage of Bowie’s concert during the Isolar II tour at the time they were working on Just a Gigolo, is amazing. You get to see him performing his heart out during the time he was promoting both Low and “Heroes.” Not to mention his fellow comrades during that time frame with Crimson alumni Adrian Belew, Hawkwind’s Simon House, Carlos Alomar, Utopia’s Roger Powell, and the late, great Dennis Davis lending Bowie to the finish line.

That’s one of my favourite periods of Bowie alongside Ziggy Stardust and The Thin White Duke-era. This is where he found his niche and got cleaned up whilst sharing an apartment with Iggy Pop and his next door neighbour, Tangerine Dream’s Edgar Froese. The krautrock genre was a big impact on David when he was doing his Zeit period from 1977 to 1979 in the realms of Kraftwerk, NEU!, and Froese’s 1975 release, Epsilon in Malaysian Pale.

One of the best things about the film is that there aren’t any people talking about him which was shown in Francis Whately’s trilogy of Bowie’s career (Five Years, The Last Five Years, and Finding Fame). It’s David doing the narration throughout various interviews he did and taking us on his spiritual journey on who he really is from ‘70s, ‘80s, and ending into the ‘90s with Earthling.

When I was watching Moonage Daydream, I nearly got emotional at times because his music had a big impact on me. Like Peter Parker (Spider-Man) who was never part of the cool crowd and got picked on the big kids in High School, David Bowie let everyone know that it was okay to be uncool. You can be different, no matter what size or what shape you are, you can be whoever you want to be.

I have watched Morgen’s documentary about twice now. And I might watch it again either as a Birthday, Hanukkah, or Christmas gift. So prepare yourself and throw the darts in lover’s eyes, and watch this movie not just on your 4K” flat-screen TV, but on the big screen when it comes back in IMAX form someday between the States and around the world. Or for a midnight showing. And this documentary is to be played at maximum volume.