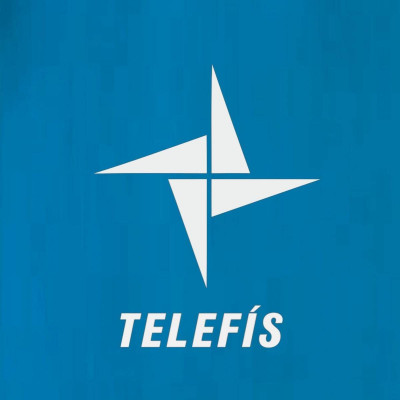 a Dó by Telefís

Completed just before Cathal Coughlan’s sad passing earlier this year, Telefís‘ second album a Dó is an excellent addition and a superb last hurrah for this song-writer who was just a few chart placings short of crossing over into the mainstream with Microdisney back in the 1980s.

After Microdisney Coughlan formed Fatima Mansions who matched the singer’s lyrical anger with a fierce alternative/punk sound. He has also released several solo albums over the years; the last of which was 2021’s Song of Co-Aklan. There is a wealth of material to explore and discover for the uninitiated, or for those like myself who dipped into his output at specific times over the years. For starters will be a listen to the Telefís’ debut album as a Dó is my first proper listen to them, and I’m hooked.

Telefís (the Irish word for television) is a collaboration with producer Jacknife Lee. A combination which sees Cathal’s Scott Walker-sque baritone voice sound-tracked by deeply textured electronica pop. Along the way there will be musical reminders of Human League, Soft Cell, LCD Soundsystem, and Kraftwerk woven into its own rich tapestry. The urgency to finish the album has produced some very fine damn catchy songs all filled with a crisp freshness. Bringing in a host of friends – Jah Wobble, former Microdisney colleague Sean O’Hagen, Echo and the Bunneyman’s Will Sergant, and post-punk funkateers A Certain ratio all serve well the quality on offer here. It is mastered superbly by Collapsed Lung’s Anthony Chapman, and released on the rather wonderful Dimple Discs label.

It has an array of instant pop smarts and infectious squelchy melodies. There is the electronic glam stomp of ‘Swinging at the Hypnodrome’. The electro pop of ‘Airstrip’ and if it was a just world, the thinking person’s disco ‘Space is Us’ would be a massive hit single. Elsewhere, Will Sergent applies spacey guitar fed through an array of effects on ‘Age of Cling’. While it is near impossible to resist a dance to the 90’s rave-ish ‘Strawboy Supernova’.

As is always the case where Cathal Coughlan is concerned, the lyrics are descriptive, in-depth, and possess a sharp bite. As Lee says in the press release ‘’the mischief, the tenderness, and the profound melancholy, it’s all here.’’ While the exact meanings may not be easily and instantly understood (a deep knowledge of Irish history and politics would be helpful), beneath the surface there are hints of 20th century Irish history and cultural stagnation.

Experimental, playful, serious, a Dó is a vibrant explosion of ideas and an instant earworm. The album has many assets, but the superb vocal tones of Cathal Coughlin is the magical sprinkle on top. It’s a fitting triumph to an intelligently intriguing and unique talent.