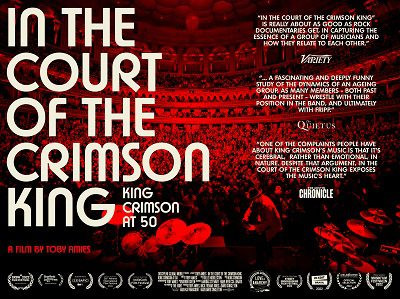 In The Court of the Crimson King: King Crimson at 50 by Toby Aimes

“Within many King Crimson I felt, I can’t be the only sane man in this asylum.” Robert Fripp has always kept that machine of Crimson’s music going since its formation on November 30th, 1968. Complicated, humorist, surreal Dadaism, challenging, and to the point, Fripp has a way of getting down to business. When you’re in a band like King Crimson, you are entering the lion’s den. It’s almost as if; do you have it or don’t you have it? That becomes the big question when you join the band.

That and this incredible documentary done by former VJ for MTV’s own Toby Amies (Nowness, The Man Whose Mind Exploded), showcases the band on tour during its 50th anniversary in 2019. When you think of rock documentaries you think of The Filth and the Fury, Amazing Journey: The Story of The Who, Rush: Beyond the Lighted Stage, Metal: A Headbanger’s Journey, and Super Duper Alice Cooper. Those are the ones that hold up years and years later.

In The Court of the Crimson King: King Crimson at 50 is a complete opposite of how a documentary is done. Now this isn’t a complete history of the band’s legacy, but Amies is taking a different approach, honouring the Ripping Yarns and Monty Python valedictorian, Sir Michael Palin who is now known for his travel documentaries since 1989. But for Toby, he makes his own travel documentary whilst being on the road with the band three years ago.

Not only he interviews alongside Robert, but Jakko Jakszyk, Tony Levin, Mel Collins, Pat Mastelotto, Gavin Harrison, Jeremy Stacey, and the late Bill Rieflin, but alumni’s from Bill Bruford, Michael Giles, Jamie Muir, an emotional Ian McDonald who apologised to Robert who broke his heart when he left the band at the end of ’69, and outspoken views from Adrian Belew and Trey Gunn.

“Being in Crimson is a little bit like having a low-grade infection. You’re not really sick, but you don’t feel well either.” That’s a strong statement from Gunn who had been with the band from 1994 to 2003 (THRAK, The ConstruKction of Light, and The Power to Believe). And as I’ve mentioned earlier, being in King Crimson is very much like walking into the lairs of Robert’s territory. He puts you on this dangerous tightrope, and you have to make sure you play from start to finish and make sure that you don’t fall towards your doom.

It’s not easy, it’s challenging, complicated, and in your face. For Amies, while he doesn’t know about the band’s music, this is an introduction for him to understand why they’re still around years and years later. And he understands it.

Not to mention in the moments in the film where Fripp turns the interviews to Toby. A particular scene where he interviews Jakko on why he is unique as a musician, and he’s quick to answer before Fripp interrupts, “Tell him he’s talking a load of shite!” And it’s quite a funny moment where it’s this crossover between the comedy duo’s; Laurel and Hardy, The Two Ronnies, Morecambe and Wise, Abbott and Costello into one.

Fripp is good at bringing humour into the documentary, including after a long 2-hour show where he gets off the elevator and lets Toby know that he needs head back to his hotel room and practice. He asked him, “Could you not just give yourself a break?” Fripp replies, “You could ask an Athlete that. Why not do nothing?”

He does have a point with that question. But on the other hand you want to say to the screen, “Robert just take the night off. You had an incredible performance, give your fingers a chance to relax.” However, there’s a human side to him. You can imagine how much pain he went through after Crimson’s demise in 1974, following the release of Red.

He went to Sherborne House which was JG Bennett’s international academy for continuous education, one of the lines that Fripp remembered from Bennett was “If you have an unpleasant nature and disliked people, it is no obstacle to work.” And he knew that he was speaking to him.

Fripp met Bennett a month before he died on December 13th the same year. He went downstairs and talked to him about continuing his education with Sherborne. There’s a moment where he’s in tears silently for a few minutes, knowing how much this man meant so much to him. Because it hits home. Bennett replied back “I will remember you.” And he never forgot those words that Bennett said to him.

But the real heart of the picture was Bill Rieflin. Bill is the cornerstone during his last leg of the tour. He has a great sense of humour as well. Rieflin shares the same wits and playful momentum with Toby despite his battle with colon cancer. And it’s quite a treat to bring his presence to the film.

Bill advises Toby to keep the good bits while driving back to his house. “If you find bits that you like, use them and ask me. Seems fair? The good news is if I expire you won’t have that problem at all.” I can imagine that Toby is fighting back tears during his conversation with him, but Bill keeps Toby’s spirit up and running before he passed away on March 24, 2020.

When they did the gig at the Royal Albert Hall for three nights on June 18, 19, and 20th, a year before Bill’s passing, they can feel his spirit at the venue. Knowing that Bill is a part of the family.

Whatever you may think of both Robert Fripp and King Crimson, this documentary brings everything full circle for the legacy of the band’s music forever and ever. But for Fripp, he’s got more brainstorming ideas that he’ll cook up next. Either in his laboratory, or throughout his kitchen.