(((O))) Feature: Echoes of the Past: Charles Snider – The Strawberry Bricks Guide to Progressive Rock 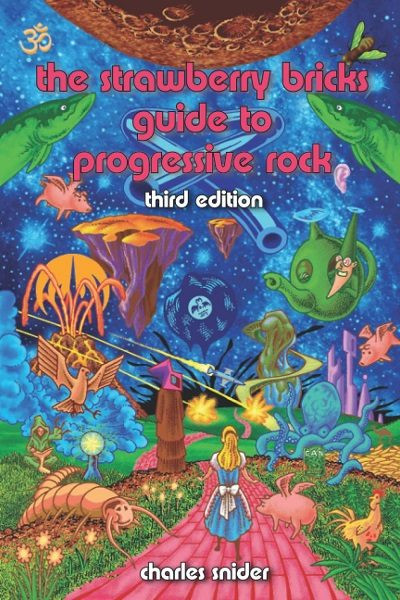 As the mid-to-late ‘60s started to give birth for what is known as the psychedelic scene thanks to the Beatles’ Rubber Soul, Revolver, and their groundbreaking conceptual 1967 masterpiece, Sgt. Pepper’s Lonely Hearts Club Band, something was lurking across the corner as this synergy of the underground scene to critically acclaimed to find a following, the progressive rock scene is like a burning flower that’ll never go out.

Decried by the so-called rock critics during that time frame, it is still growing stronger. But this incredible third edition of The Strawberry Bricks Guide to Progressive Rock written by Charles Snider, this 572-page paperback book takes us on a comprehensive discography of 500 plus albums. That’s a lot. I mean a LOT!

But for Snider, he took his time to go through the band’s histories, musical synopsis, centrepieces, and his own opinions of the music that is presented in the timeline from 1967 to 1982. It not just the genre that has stayed for a long, long time, but it has grown into this massive flower ready to be bloomed in all of its glory.

The generation of these musicians took massive challenges, were never going to be the critic’s darling, and walked into uncharted waters from art rock, Canterbury, krautrock, jazz fusion, the rock progressivo Italiano, and all across Europe, the book is quite a trip down memory lane for listeners who were there when it was happening, to the younger generation who are discovering this music thanks to the internet and social media.

Snider describes the genre in the prologue as “the most accurately defined by the specific generation of men who created it, by combining existing structures of rock ‘n’ roll with vast and assorted influences, including those from their mostly European heritage, and even those beyond that heritage.” He takes you close to the edge and going beyond the hall of floaters in the sky by taking us on a magic carpet ride with familiar planets and unexpected surprises.

Take for example, The Rolling Stones’ Their Satanic Majesties Request. When you think of it, you might say, “Wait a minute, the Stones in a prog book?! That doesn’t make any sense!” Well, it does. Yes the band have mixed feelings about the album, but this shows the band taking a step into the psychedelic waters and not try to make it their own version of Sgt. Pepper.

It’s more than just the big names of the Floyd, Tull, Genesis, Yes, and ELP, its Snider’s detective work that is right to the point. From Egg, Curved Air, Magma, Metamorfosi, Van der Graaf Generator; to the atmospheres between Tangerine Dream, CAN, Klaus Schuzle, and Cluster; and the ones who brought epic story lines right down the line between Renaissance, Nektar, Focus, and Le Orme.

Whether you agree with Snider or not, it’s his opinion that has honesty, and throughout his own personal choices that’ll make you want to dust off your old records from your personal library you hadn’t played for quite a while and put them on and slide a needle into the groove and use it as an alternate soundtrack to the Strawberry Bricks. And as Bette Davis said from the 1950 classic All About Eve, “Fasten your seat belts, it’s going to be a bumpy night.”