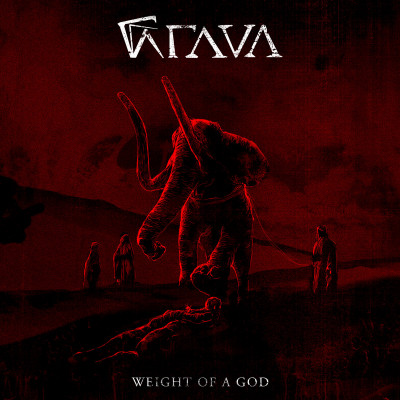 Weight Of A God by GRAVA

It might not be a concrete rule that slow bands play long songs and vice versa, but it’s something that makes a lot of sense. When there’s no hurry, it can be cathartic to sink into music, to let it wash over and eventually engulf the consciousness (conversely, try keeping a 200 bpm grindfest going for 45 minutes without RSI rearing its ugly head). Danish trio GRAVA aren’t the first to upset this standard, their debut’s seven cuts of lurching, trauma-inducing sludge collectively coming in at less than half an hour, but the combined potency of their riffs and the ugly nature of their overall vibe makes their approach a logical and perhaps even welcome one.

With each song contemplating death from the perspective of the dying the ferocity of their music is unsurprising but even then, it’s difficult to not be caught unawares by opener ‘Waves’. It immediately launches into a tarry slurry of distortion and undisguised rage, every riff rising and stomping down on the listener’s head like the foot of the leviathan that adorns the album’s cover. With a twin-vocal approach that flits between guttural roars and a rawer, more caustic delivery that calls back to early hardcore’s earnest ferocity, there is little light to be found here; the fact that the bass rattles like a mouth filled with gravestones grinding and gnashing its terrible teeth is just another facet to how much misery and weight they cram into three minutes.

‘Bender’ twists the knife more cruelly, the guitars sharper and incisive but interspersed with moments of space and general delicacy. It’s here that GRAVA’s skill with melody becomes apparent and there’s no moment that doesn’t feel memorable in one sense or another. Even the stark, percussion-led intro frames the song beautifully, a moment of awe and foreboding before the walls collapse; likewise, moments that should feel like being bombarded with blunt rage have a subtle push and pull showing the band’s skill at dredging up something uncomfortably alluring.

If there’s one song that really could be said to define the album’s sonic ethos, it’s ‘Crusher’. Telling the tale of the unfortunate trampling victim on the cover, it has a sense of inevitability and indignity behind it. These riffs feel insurmountable, marching headlong with a sense of animalistic purpose, and it’s one of the few moments where it really feels like they could have kept this going for as long as they damn well felt like it. It never loses steam or outstays its welcome; ‘Crusher’ just keeps on crushing till its dying breath.

‘Alight’ and ‘Cauldron’ take similar but divergent approaches, each lulling the listener into false calm before letting hell erupt. In the case of ‘Alight’ the tension is still there but it has the same apocalyptic beauty as Through Silver In Blood-era Neurosis, the sense that even though the weight and threat of violence exists it nonetheless feels like a primer for something horribly momentous, a tempest you can’t tear your eyes or ears away from. Meanwhile, ‘Cauldron’ is filled with melancholy, its guitarwork delicate and pleasing to the ear so when a sheet of blackened doom drops like a portcullis, there’s a gut-punch viscerality designed to catch you off-guard and hit where it hurts.

Telling the tale of a the third Servile War, Spartacus’ doomed revolt against Rome that ended in mass crucifixion, ‘Appian Way’ is fittingly savage. There is dread and finality in every note and bellow and despite being the shortest track here, it perhaps hits the hardest. Although nothing the band has thus presented could be said to be light in subject or sound, the sense of scale is apparent and in depicting atrocity in all its ugly spectacle, they make their point in a poignant and truly uncompromising fashion.

And then there’s the finale – ‘The Pyre’. At eight minutes long it’s simultaneously a momentous closer and a bold statement of further intent, dredging up the blunt fury and lean, unadorned might of the rest of the album but branching out with passages of organ that deepen the atmosphere. On one hand, the sheer scale of this composition feels at odds with GRAVA’s typical approach to heaviness in that it allows repetition and embellishment to do at least some of the heavy lifting that they typically achieve through volume and rage alone but then again, there’s no denying that it remains effective in their hands. It’s almost awe-inspiring and in the context of an album that delivers so much negativity and breathless rage in such a brief window of time, the chilling atmosphere that sees it out gives a few minutes to catch the breath before you inevitably press play again.

Weight Of A God is an unpolished treasure, an absorbing and often harrowing work that wastes little time in burrowing under the skin. For anyone looking for a punch of pure negative energy to kickstart their morning or to distract themselves from daily gripes and contemplate the all-consuming misery of human existence, this is a potent use of your time and effort.