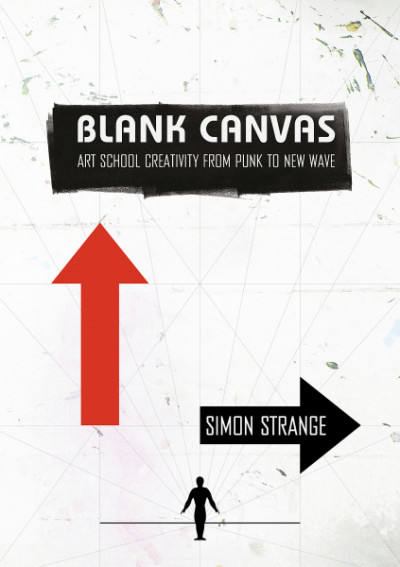 According to Intellect Books, Simon Strange is a musician and producer engaged in ‘Ph.D. research into the connections’ and interactions between art colleges and popular music. He lectures on the socio-cultural context of popular music and creative collaborations at Bath Spa University having been ‘head of music at Bath College’ (1). I didn’t know any of this when I met him at the Punk Scholars Conference in London last December and can happily report that he is also a really nice, humorous bloke. At the conference he did a presentation/interview around his very recent book Blank Canvas: Art School Creativity From Punk To New Wave. There have been a few books recently around the tie up between art colleges and 1960s/70s music, exploring the effect of art college education and experience on specific bands and scenes, Michael Bracewell’s Roxy: The Band That Invented an Era and Gavin Butt’s No Machos Or Pop Stars: When the Leeds Art Experiment Went Punk focus on this relationship and it’s included in Rebecca Binns’ Gee Vaucher: Beyond Punk, Feminism and the Avant-Garde and John Roberts’ Red Days: Popular Music and the English Counterculture 1965-75. There are probably more but they’re the ones I’ve read!

So, Blank Canvas: Art School Creativity From Punk To New Wave, what’s it all about and how does it do it? The book’s focus is an exploration of radical art school education and its influence and effects on (predominantly) punk, post punk and new wave.

The book ‘connect(s) art education to the development of popular musicians in the genres of punk, post punk and new wave through a conceptual framework called Blank Canvas…the idea of a blank, pure space, or position…a redefining of artistic concepts’ (p. 5), arguing that ‘(a)rt college education mainframed conceptually driven and culturally connected elements, which informed some key bands through the mid to late 70s, where philosophy, politics, culture and science, for example, interfaced with artistic development’ the lack of emphasis on technical ability opening up a space for ‘increasingly experimental, radical and multi-genre music’ (p. xiii). If that sounds a bit daunting it isn’t as Simon’s writing is accessible, unpretentious and at times playful (his inclusion of lyrics within the text).

The book is divided into three parts tracing the seismic shift in art education and (therefore) wider culture from modernism to post modernism in the 1970s. Postmodernism being beautifully defined (p. 62-70) and utilised as a key concept throughout the book (p.73).

Running through the book are four themes; hierarchies, process, experimentation and relationships (p. 6). The dismantling of traditional hierarchies between high and low art, between people, between technical accomplishment and ideas, within bands and music. The increased importance of artistic process over product, a more process orientated mindset within art and music, which in turn led to increased experimentation and innovation. The interconnections between people and scenes (p. 238-250). Eno’s concept of ‘scenius’, the postmodern dismantling of the modernist/Romantic idea of the lone, often male, genius and instead the recognition of the importance of ‘collective interaction’ in bringing ’great work to the fore’ (p. 250).

The book is populated by a fantastic and fascinating array of characters and entities as Simon traces the interconnections between avant-garde art, UK radical art colleges/tutors and popular music of the 70s; Walter Gropius, Johannes Itten, BAUHAUS, Marcel Duchamp, John Cage, Dada, BRIAN ENO, Rita Donagh, Roxy Music, Richard Hamilton, the Situationists, Art and Language, Black Mountain College, Bill Drummond, Rhodes and Mclaren, Pauline Black, Gina Birch, Barry Adamson, Roy Ascott, Victor Pasmore, Mark Fisher, Newcastle, Leeds, Hornsey and Ipswich art colleges/schools jostle and crowd the pages in a celebration of the dismantling of the artificial dichotomy of life and art (p. 263). (The reason Bauhaus and Eno are in capitals is to remind me what significance roles they have in the book, the importance and wide spread effect of Bauhaus pedagogical model in UK radical art colleges and therefore on art student/musicians, the centrality of Eno as a pivotal figure in the transposition of avant-garde and experimental ideas into UK popular culture in the 1970s.)

In the final section, Simon considers the similarities between punk and hip hop, both urban, anti establishment, DIY, utilising avant-garde techniques (p. 254-55). He also draws attention to the presence of women within punk, post punk and new wave, despite the overt patriarchy of the time, and the importance of the 2 Tone scene (p. 259). Agreeing with Mark Fisher, Simon concludes that ‘(c)ulture is decelerating, juddering to a halt (p. 256), reflecting that the 1960s/70s was a period that enabled working class kids access to art colleges and the time to develop concepts/ideas/craft through education grants, the dole and music industry investment (p. 256-258). Current lack of cheap accommodation, education funding and the dismantling of the welfare system has ensured that art education and the music industry is (again) dominated by the bourgeoisie (p. 257-8).

However the author sees some room for hope for a new Renaissance in art and music with the wider deployment of AI/automation, the consequential increased importance of leisure time and the possibility of the introduction of universal basic income, these factors giving those currently excluded from art and music renewed opportunity to participate (p. 254, 258).

Blank Canvas: Art School Creativity From Punk To New Wave is a superb relook at the importance of the avant-garde and radical arts pedagogy in an important period in UK arts, art education and music. A fascinating book for anyone interested in the arts and music of the 1970s particularly but more widely for anyone interested in the interconnections and influences that effect, encourage and shape culture.

Blank Canvas: Art School Creativity From Punk To New Wave is available at https://www.intellectbooks.com/blank-canvas and lots of other places!