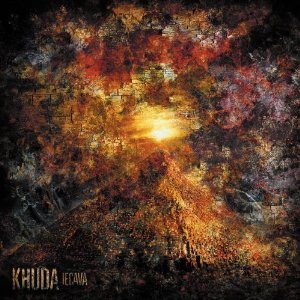 Reviewing the second long play album from this duo from Leeds, in my case, began with heavy research filed under ‘Google is my best friend’ simply to be able to understand what on Earth this is all about? Not only the do band’s name and album title sound more than exotic, but also all but one of the song titles do not resemble English at all. So on top of pleasantly violating my ears with the sounds, I had an intense rendez-vous with Wikipedia to crack the ‘Iecava’ code.

To start off with – the band. Khuda is a 2 piece band, consisting of a guitarist (Tom Brooke) and a drummer (Steve Myles). Their version of post-rock is of the instrumental, experimental and most definitely heavy provenience. I have to say it’s absolutely stunning to realize the spectrum of sounds that can be produced with those 2 instruments only. The guys have been giging as the current lineup for 2 years and you can hear in their music how close knit their stage relationship is – every sound is just perfect, however it’s not the annoying pedantic type of perfection – it’s the natural outcome of 2 pieces of creative jigsaw beautifully falling into place.

Now to begin cracking the Khuda code – ‘khuda’ is a Persian word meaning ‘Lord’ or ‘God’, today mainly used in the ‘God in Islam’ meaning. Starting from here, to me ‘Iecava’, taking the lead from the islamic meaning, is a story of a war and takes the listener on quite a geographical journey. The album calmly opens with ‘Seia’ – Seia is a municipality in Portugal founded 2400 years ago by Turduli and for most of the time occupied by Arabs. It was conquered in 1055 and remained Portuguese ever since. The track gradually develops more and more layers and eventually smoothly turns into ‘Boreas’. Now Boreas is a Greek god of the cold north wind, typically depicted as very strong, with a violent temper. In the Persian war, Boreas gave a helping hand to Athenians and destroyed the barbarian’s ships. The song begins with tunes reminding of sharp blows of wind before Tom Brookes’ melodies allow the god to spread the wings by his feet and travel from one place to another.

With his last violent act Boreas leads to ‘Luka Mesto’ – Luka is a minicipality in Slovakia, but also a region in Yugoslavia, famously torn by wars in the recent past. Steve Myles’s technical drumming resembles ruthless machine gun shots. Full of raises and drops of tension, ‘Luka Mesto’ takes us to the title ‘Iecava’, a yet another municipality, this time in Latvia. Iecava has seen many victories, and among many others the one of Prussian troops fighting for Napoleon over Russian forces. The tension in this song rises with every added loop and layer and brings a victorious crescendo. After such a climax suddenly we are thrown into ‘Haykio’, and into the ruins of Japan. Eerie single high notes sound like an echo within empty walls of the places abandoned because of damage during World War II or earthquakes and tsunamis.

The very self-explanatory ‘Marchmen’ steadily marches into ‘Don Benito’, yet another municipality famous, or rather infamous, for a battle during Napoleon’s conquest of Spain that ended in thousands of inhabitants being killed. The album ends with ‘Tyche’ – a Greek god of luck and good spirit.

To sum it all up, Khuda deliver amazingly layered, built up and well paced pieces of music but it’s also done in a very unique style (drop-d very accurately points out that Khuda’s post-rock is not the ‘predictable, joyous’ one). What is more, the dark and heavy sound is not only brilliantly produced and performed but also simply clever. Everyone who knows me and my music taste knows I’m a sucker for a concept album and that one is a true masterpiece – from the band’s name to each and every single composition, ‘Iecava’ is a tale of gods overlooking violent wars and leading to victories. After discovering everything that’s behind the music, I’m even more amazed than I was when I was simply getting addicted to listening to it. The two lads from Leeds definitely earned themselves a rare niche in post-rock and I can’t wait to see what they come up with next.