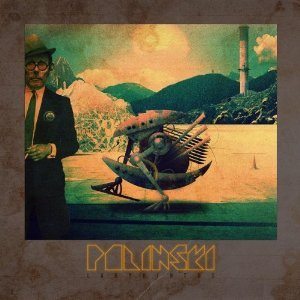 It’s always worthy of note when a band member steps out on their own for a while and decides to do something different. Granted, Paul Wolinski choosing to undertake a solo jaunt at this time could have been slightly better timed, as his band, 65daysofstatic, arguably the best post-rock band in the UK, are gearing up for the release of their fifth studio album ‘Silent Running’ in a fortnight (yes, that is a re-score of the 1972 sci-fi film of the same name); but at the same time, one listen to ‘Labyrinths’, an album nowhere near as difficult as its name would suggest, highlights the man’s ambition in such a manner as to point towards a second album being released under the Polinski banner sometime in the future.

Musically speaking, it’s a follow-up to 65’s last album ‘We Were Exploding Anyway’, which takes the electronic elements that became a prominent feature of their sound last year and pushes them to the n degree. As his band’s sound developed, their melodies became even more arresting, and this too is an important aspect of ‘Labyrinths’, which, despite being described in the press release as ‘an album of beats and noise’ (which immediately made me think of something akin to the sound of 65’s debut EP ‘stumble.stop.repeat’., released in 2003), is essentially rooted in insistent, poppy hooks. It’s immediate, too: ‘1985-Quest’ takes scarcely ten seconds to draw the listener in, before revealing itself as a song that’s packed to the brim with inventive melodies.

The invocation of a specific year in the album opener’s title is significant; ‘Labyrinths’ takes its cues from 80s sci-fi and film music, and somewhat ironically is cinematic enough to score something akin to ‘Silent Running’. There has always been a cinematic element to any music Wolinski has been involved with, and his tightly-structured songs, most notably lead single ‘Stitches’ (which features a vocoderised Big Black Delta on vocals – yes, you read that right, actual vocals) wouldn’t feel out of place in a film. ‘Tangents’, too, (the most 65-esque song on the record, it must be said) becomes intense enough to provide the soundtrack to an explosive action scene.

On that note, the entire album is rather intense in its own right, and early on it becomes apparent that quieter sections serve as direct contrast to what they’re surrounded by. The intro of ‘Still Looking’ sounds like it’s tipping its hat to ‘We Were Exploding Anyway’’s ‘Debutante’ with its mid-tempo, dramatic intro, before changing tack completely and becoming something that Justice might have put on ‘Cross’ back in 2007. Its denouement, beginning at the five-minute mark, is breathtaking, and would be considered overwhelming if not for the extended build-up during which the listener’s given time to prepare themselves.

In a similar manner, the eleven-and-a-half-minute (yes, seriously) penultimate track ‘Kressyda’ begins in modest fashion with some Philip Glass-like piano flourishes and shifting between various different time-signatures. This is merely the calm before the storm, however, as, around the three-minute mark it gives way to an eruption of noise and driving rhythms. Its melody is tested to breaking point before settling into an extended coda which allows some more breathing space. With such dramatics on display, it’s almost odd to hear that it doesn’t close the album… that is, until ‘AWALTZOFLIGHT’ (ALL-CAPS title necessary) shows itself.

For all the album’s intensity, sometimes you just can’t beat a dose of euphoria, and the closer is similar to the uplifting ‘Like Fireflies’ ensures that ‘Labyrinths’ ends on the highest of high points. It’s the payoff, the reward for listening to this album, one which has such a full-throttle approach to its songs that it can become too much at times. This is no criticism; Wolinski does ‘relentless’ extremely well, but when the record shifts down a gear and all the hard-hitting moments are placed into context, everything seems to fall into place. Who knows if he will ever make another solo album? It remains to be seen, but he’d be foolish not to try, especially when, on his first time out, he’s created something as remarkable as this.