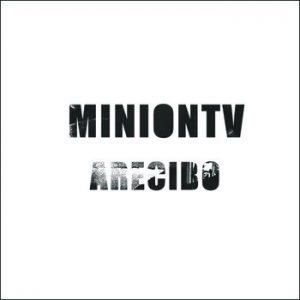 It’s been almost a month now (in fact today, 4 December, is exactly a month!) since the latest from MINIONTV, a 5-song EP entitled ‘Arecibo’, was released. I really wish that I had written this review a lot sooner, but life being what it is…Now that I am sitting down to write this, FINALLY, I am actually very glad that I have had the extra listens of ‘Arecibo’. It’s been a solid and enjoyable album since the first listen, but the extra time that MINIONTV, ‘Arecibo’ and I have had together has been quality, and has really deepened my appreciation for this work and this band.

Believe it or not, I am not a professional writer and music reviewer, but a wage slave in the IT field. Work sent me to the tip of America’s penis last week: Miami, Florida. It’s a lot like my hometown and state, San Diego, California, there, but at the same time it was almost like being in a strange country without a great grasp of the language. I speak a little Spanish, but I learned a slower, Mexican-influenced pronunciation and tempo, whereas in South Florida, the Spanish is much more European and South American-sounding, along with being spoken at a breakneck, machine-gun tempo.

I spent most of the last week alone, working in an empty warehouse, not speaking for many hours at a stretch. The whole time, my only constant was this EP by MINIONTV. I basically had it on repeat for much of the day, every day, and right now, back at home, listening to it again, it sounds as familiar as anything in my beloved collection, yet as fresh as it did on first listen. That to me is a true measure of success in music: after many listens, it’s not stale and it’s not getting the least bit tired dated or tedious.

MINIONTV’s bio page tells me that they are a 5-piece instrumental band from Liverpool, and that they are heavily influence by atmospheric and ambient music, as well as electronica. It’s pretty obvious that these fine musicians have listened to a wide variety of music, since there is a little bit of many genres apparent within.

But rather than follow the standard ‘Sounds Like’ review style I usually do, I am going to do what some of my fellow EchoesandDust’ers have done, and just tell you what this music makes me feel like, which, like their style, runs the gamut. My favorite is the upbeat-ish title track ‘Arecibo’, with the drums really taking center (or centre) stage, layered over electro-beeps and guitar. This tune really builds and builds, and is really pretty complex when you start to break it down. At over 7 minutes, the band give themselves time to develop the track, to let it flow.

Next for me in order of favorites, is ‘Keep the Negatives’, which has piano as its focus. It’s a slower song, and has a catchy sort of almost melancholy riff as its main hook. Again, the drumming is almost like military marching drums at times, heavy on snare, but also with a ton of cymbal. At about halfway, a heavier more direct interlude occurs, but the song retains the almost sad vibe. It sounds to me like finality, if that makes sense; not hopeless, but sort of a sad resignation. Give it a listen and call bullshit if you disagree. Either way, it’s a damn good song.

The last track, ‘Vi’, really sounds to me like it should be on some sort of ‘Blade Runner’ soundtrack. And guess what? MINIONTV mention on their site that they ‘consider film a major influence, and that their music has been used in TV and film worldwide’. I could definitely see this group being composers for film soundtracks on the same level as Vangelis and similar others.

Another thing I really like about MINIONTV, is that on their band website, they give you a list of what each of the band members have been listening to for the last X number of days, and I love that sort of thing; I feel connected to bands that want to share what inspires their work and their tastes in music. I think it’s a really good thing. As a Music Nerd, when I see that an artist I like also likes Talk Talk (just for example), I go ‘Yeah, me too!’ and that somehow makes me feel, at least, like I have an even greater connection to the band.

Now that I have gone way over my word count, one last thing: Please check this band and their music out, and if you like it, please buy it. Please, let’s keep integrity and creativity in music.