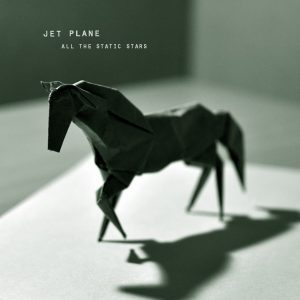 You might be forgiven for sensing traces of that all too common formula for creating the perfect post rock album in Jet Plane‘s latest offering, ‘All The Static Stars’. On first listen, you can hear how faithful they are to the doctrine: find a melody, slowly repeat over time and gradually crescendo into another melody. Fade away.

Well, you can shatter that perception of the Russian four piece right now. While restrained throughout the first half of the album, Jet Plane‘s music is hardly subdued. Always maintaining a preclimactic energy, you find yourself lulled into their world; a trance of wonder and appreciation for beauty in minimalism.

By the time ‘Air Threads’ flows through your speakers, you’ll have found yourself so drawn into the down-tempo nascent stages of the album that the melody seems positively upbeat. Suddenly, the riff comes crashing through and the spell is shattered around you. It leaves as unexpectedly as it arrives and you are left to slowly pick up the pieces of the ethereal dream world they have so skilfully crafted.

The album takes a turn for the more ominous and trepidatious with ‘Rose’, but Jet Plane still continue to stack the density of sound over the course of time. ‘Volcano Riding’ is a glorious culmination of everything that ‘All The Static Stars’ set out to achieve, truly ending the journey on a wave of peaks and troughs, but ultimately a high you could only feel if you had listened to everything that came before it. The aptly chosen album cover shows an image of an origami horse, depicting the intense amount of effort that went into contructing ‘All The Static Stars’ fold by fold.

What impresses me most about this band is how they have confined themselves to the gentler unassuming end of the spectrum, yet they’ve cleared so much space within that area. Through mutual appreciation and masterful control of their sound as a whole, Jet Plane have managed to explore an enormous dynamic range by allowing you acclimatise to the mild motion of their music, which they confidently establish early on. ‘All The Static Stars’ is not just an album that is heard, it is a graphic journey that allows you to feel yourself calmly floating on fierce air currents alongside the band.