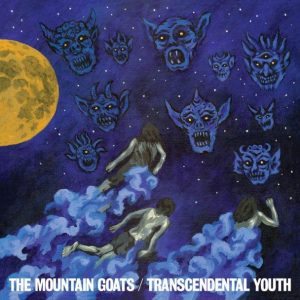 21 years of making music, fighting inner demons and addiction and now fatherhood has made John Darnielle of The Mountain Goats a very busy man and he has come a long way since starting off strumming and hollering his poetry into his boombox. The past 10 years have seen Darnielle (who has often performed solo despite the plural moniker) sign to several different labels but the past two years have seen him settle into a comfortable groove with Merge Records, teaming up with multi-instrumentalist Peter Hughes and drummer Jon Worster and their second album ‘Transcendental Youth’ is out now.

Firstly, there is nothing transcendental about this album, but in classic Darnielle style, the lyrics take you through a whirlwind journey of often self-deprecating survivor narratives that frequently (although not always) conflict with the accompanying sound.

The album opens with ‘Amy aka Spent Gladiator 1’, Darnielle’s distinctive almost wailing vocals, strong guitar strums and sauntering percussion alongside lyrics such as“Do every stupid thing that makes you feel alive /do every stupid thing to try to drive the dark away …and stay alive, just stay alive.” Is one of the more hopeful of the 12 tracks expressing a message of living life to the full, despite the darkness, just keep plodding through!

Then there’s the assertive yet ambient piano during ‘Lakeside View Apartment Suite’ telling the story of addicts in an apartment waiting for their dealer and Darnielle’s quieter, less urgent vocals trying to justify this life, conflicting with more defensive lyrics such as “You can’t judge us – you’re not the judge.”

Although susceptible to criticism, and to some perceived as draining from the overall feel of the album, I have a huge soft spot for the slower songs on ‘Transcendental Youth’, take ‘Until I am Whole’, for instance, despite dark and angst ridden lyrics such as “Hold my hopes underwater/Stand there and watch them drown” there is a beautiful sense of serenity and comfort in the haunting vocals of the chorus, “I think I’ll stay here/til I feel whole again/I don’t know when”, sending out a message that even when you feel broken, take your time, find your comfort, and then come out of the shadows again.

What took me most by surprise was the incredible use of horn arrangement throughout several tracks, but in the title and closing track, ‘Trancendental Youth’ it couldn’t be a more perfect way to end an emotional roller-coaster of an album. Regardless to whether the album is too ‘samey’ for you, if you feel it blends together, or that The Mountain Goats have sold out to a more ‘generic’ sound, I’m a fan, and I’d be very surprised if you can’t find at least one track that pulls at you. For me , all 12 tracks are magnetic.