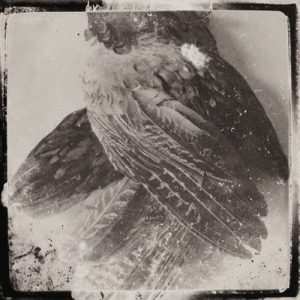 ‘The World Without Us’ slowly creeps up to you without ever trying to make you aware of it. The opening track ‘Still (I)’ becomes more of an eventuality as it occurs in a most unassuming manner. Before you know it the album has started.

The very nature of the music performed by Glissando got me wondering about the title of the album ‘The World Without Us’. At first I assumed that it was referring to a world without the human race. The music is so sparse, so open and evokes a huge sensation of overall peace that you could be forgiven for interpreting the title that way.

However, the lyrics tell a different story. ‘The Long Lost’ is from the point of view of someone accepting an old loved one, offering comfort and support through a trailing time of having broken heart. The title track is a tale of anguish, begging someone not to go, making the lament of ‘the world without us’ all too clear. The ‘us’ referred to are the two lovers, and “the world without us is cold” in the eyes of the singer. This gives a whole new depth to the cold sparseness of the album. The ambiguity of the title phrase could be deliberate; after all, life without one’s true love might feel like vast emptiness, cold chilling loneliness, the end of all human existence.

The entire album does not throw anything at you forcefully, but the music moves so gently that it almost occurs without you realising what’s happening until you’re embedded deep into it. I was already immersed into the soft intro and fully geared into instrumental music mode, when, during the second track, Elly May Irving’s angelic voice kicked in. As with the rest of the album, it is almost an eventuality that washes over you, gentle but nonetheless very present. Her vocals glide effortlessly over the bed of beautiful sounds, gradually thickened with ambient string arrangements and piano melodies and sink into them whilst managing to remain distinct. The classical soaring soprano and ambient music reminded me a lot of singer Hazlitt’s first EP ‘Requiem For Little Bird’ and carries all of the emotion that she did in her album.

The closing track ‘Still (II)’ revisits the opening melody, but this time with vocals. It closes the album off neatly, having taken you on a journey through a void that essentially ends up where it started, a tragedy without resolution, yet it displays immense acceptance and calm resolve about the turns that life takes.

‘The World Without Us’ is a work filled with melancholic melodies, yet has such a calming effect on me that it almost caresses you as they let you into their world, opening their hearts to explain the causes of their wistfulness while simultaneously comforting you all the time. The considered nature of the album is almost a meditation on sadness. There is yearning, coldness and a void caused by all that is lost, yet the sheer beauty of their expression is found in how overpowering the simplicity of their music is.

‘The World Without Us’ is as reassuring as it is forlorn, as we can all find relief in the fact that something beautiful can rise out of loss and none of the experiences were in vain.