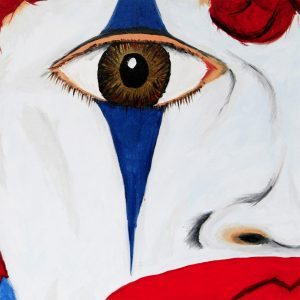 Based in London, The Cellophane Flowers quite frankly are a curiously enchanting quintet. A few years ago (Spring 2010) I was standing in a North London Pub (The Gaff – Holloway Road), before the very well received release of their EP’ If I Was A Girl’, before they signed to Minor Fall Records, and before the release of this eagerly anticipated debut album ‘Staring At The World’.

Leading Lady Francesca Corradini took to the stage, opened her mouth and released the most sensual, and distinctive vocals completely taking me by surprise. Like some kind of crazy Pied Piper episode I was led away from the bar, through a crowd of people to the front where I stood in what can only be described as a hypnotic trance overwhelmed by the sweet, sweet melodic sounds of what they define as ‘psycho-pop’; combined of elements of pop prog, alt-rock, surf, folk. (Remind yourselves of our interview with The Cellophane Flowers here)

‘Staring At The World’ is strongly influenced by a dark 80’s vibe and opens with ‘Voices’ a track starting with beautiful synth which may trick you into thinking you are about to listen to a cover of Alphaville’s ‘Forever Young’ until the seductively throaty vocals of Fra kick in supported by guitar riffs courtesy of Ian Sumner going and this track gets “out of control now” like the lyrics zooming from pop to rock in less than 5 minutes flat ending on haunting repetitive male vocals.

‘Pendulum Eyes’ is a fast paced track with a summery 60’s pop melody that, if you aren’t listening intently to the darker aspects of the lyrics, lulls you into a false sense of happiness. This track even ends with a cheerful bit of do-da-dooing!

Lyrically, ‘Belinda’ is by far the darkest track on the album dealing with death, although once again it is an antithesis of a track with a heavy, infused, upbeat rhythm and a sound bordering on Grunge. Fra’s vocals are rawer and intriguingly, this track in particular seems to accentuate an accent representative of her Italian heritage.

The slower, melancholy tracks are the ones that I can’t get enough of. ‘Tears Of A Clown’ is a beautifully sentimental song. Fra rasps out emotional lyrics such as “when the tears turn to frowns, turn me upside down” that serve to contrast with rapid drum beats, scintillating guitar riffs and bizarrely, uplifting, carefree chimes.

‘Staring At The World’ is a clever, it’s raw and it’s gritty and whilst The Cellophane Flowers name is “about a world of manufactured beauty” they’ve produce an album which is the diametric opposite of this. It’s unique, charismatic, and quirky. Perhaps an acquired taste, but one we have loved every bite of.

Released December 3rd and can be bought via their website.