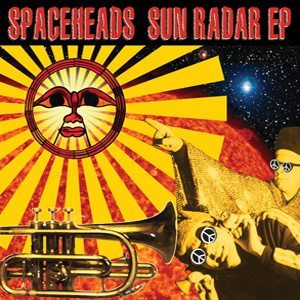 Out now at Electric Brass.

After my first blind listen to Spaceheads’ new EP, Sun Radar, I had few sudden questions for myself, the band, and the universe in general: Where have these guys been all my life? Who are they, what do they do – and why the fuck is Sun Radar not a full-length album?

The answer to Question 1 is, right here - ‘here’ being any point along the commute between London and Manchester. You see, Spaceheads aren’t exactly new on the scene. They’ve been playing together since I was about two foot tall. And seeing as I’m not exactly new on the scene, this gives us a ballpark figure of around… twenty years? Hopefully this means you’ve heard of them by now. Unlike me. Moving right along.

Who are Spaceheads? Andy Diagram on trumpet and electronics, Richard Harrison on drums and percussion. Apparently they’ve been described as an “understaffed jazz band,” but don’t believe a word of it. Whatever they lack in numbers, these guys more than make up for with technology (of course) and charisma (in spades). As I mentioned, they’ve been playing, touring and recording for over twenty years (their back-catalogue clocks in at nine albums) – and it shows. From the swift, squelchy opening riffs to its final percussive hisses, Sun Radar breathes brassy self-assurance the way a liquored businessman breathes boozy schmooze. They’re brimful of that confident exuberance of a group who know exactly what they want, how to get it, and how to sweep you up for the ride.

Anyway, I’m sure they have their rhymes and reasons RE: Question 4, but I reserve my right to feel affronted. The infectious funk-driven rhythms and sassy brass interjections tap-dance their way unabated through four tracks and unceremoniously drop you at the end, all dressed up with nowhere to go. It’s like you’ve stumbled across some grimy basement jazz club hung with cigarette smoke and oozing cool – only for it to shut at 9pm. And that, my friends, really is my only criticism of this shoe-shined, bow-tied bombshell of an EP: it’s too damn short.