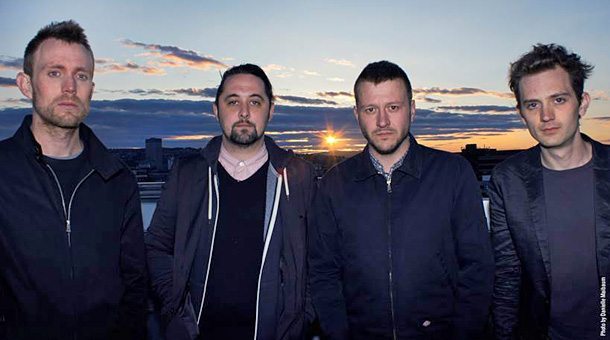 As winners of the Echoes & Dust 'Album of the Year' poll for 2013, thanks to the glorious Wild Light, and as one of the bands that best sum up the ethos of our humble site, 65daysofstatic hold a pretty special place in our hearts. Phil Johnston spoke to the band's Paul Wolinski about their upcoming shows in celebration of debut record The Fall of Math, and about the difficulties of being a band in the twenty-first century...

(((o))): This year sees The Fall of Math turn 10 years old. Does it seem that long and what memories do you have of the writing/recording process?
Some days it seems like forever ago and some days it feels like it was yesterday. No, that’s not true. It feels like forever ago all the time. I think that’s a good thing, like we’ve managed to fit at least ten years of stuff into ten years. Maybe more...  Imagine if science discovered you could somehow squash an hour into 59 minutes. That’d be crazy. Elastic time.

My memories of that era of 65 are fond but fuzzy. Lots of grand ambitions and late nights; working random service industry/office jobs on 2 hours sleep and a hangover so big it needed its own chair; trying to recreate the sound of wind on fire; a love of red lights on mixing desks and a well-worn pirate copy of Soundforge; a not-quite-in-tune piano...

(((o))): Does the anniversary provide a chance to reflect on what 65dos have achieved in the time since FOM?
Yeah, a period of reflection has kind of been forced on us. We’ve always been pretty insistent on looking forward to the next thing rather than dwelling on the past. It’s a pretty weird history, when you try and look at it all at once. If you compare it to any kind of usual band narrative, you can see all these moments where we actually, probably, should have stopped being a band and done something else instead. It’s bizarre that we’re even still here really. It’s mostly because of this nagging feeling that we’re getting better, and that the next thing we do will be better again.

We’ve been rehearsing the songs from The Fall of Math a lot at the moment, especially the ones that we’ve not played for years. They still stand up, which is great, but we are attacking them a lot differently to the way we played them ten years ago. This is a good thing. It’s made us realise that we actually have been getting a lot more adept at all this stuff, it’s not just in our imaginations.

(((o))): There will be a special show on 27th of March at Koko in London. This will see FOM perfomed in full with a second set of other material. Have you needed to revisit the tracks a lot and has any endurance training been required for a double set?
Nah… The album’s only 45 minutes long. We usually play around 90 minutes anyways these days so it’ll be much the same, or a little longer, just split into two sections.

We have revisited and entirely rebuilt a lot of the tracks though, yes. As mentioned above, we know what we’re doing now, or at least, we do relative to when we made FOM. I mean, that not-knowing-what-we-were-doing was what made it so great, but you can’t pull off that same trick album after album. It would stop being quite as endearing. So we ripped it apart, pulled out some small bits that, with ten years of accumulated hindsight, we really couldn’t bear to recreate, and re-programmed/re-instrumented/transposed what was left on to the live set-up we work with these days, which is a lot more flexible than it was back then.

We haven’t altered the songs in any major way, we figured that would defeat the point of the whole project; we just tried to improve on them in small ways, based on what we’re capable of now.

(((o))): Some of the tracks obviously have been included in setlists over the years. However is there one in particular you’re looking forward to playing or any which will be played live for the first time?
I’m not sure we’ve ever really played the opener, ‘Another Code…’ live, certainly not the way we will be doing. Perhaps we used it as an intro or something, but that’s all. Same with 'Default This' - kind of hard recreated glitchy beats like that live, but we’ve figured it out.I’m pretty sure we never played the song 'The Fall of Math' live, at least not by the time we’d actually finished writing it and properly became 65daysofstatic. I might be misremembering though. It’s not the kind of thing we keep close tabs on, truth be told.


(((o))): Also announced is ‘The Silent Running’ score being performed again at Convergence Festival in April. How different is it planning/rehearsing for these shows? And does it involve a different mindset when perfuming live?
My brain hasn’t managed to get that far into the future yet. The Silent Running project is a very different kind of show for us. It’s a lot more stripped down, requires a lot more discipline and counting. It’s fun, but it’s nothing like what the Koko show will be like.It’s very rewarding in a different way though. Imagine having a furrowed brow and concentrating incredibly hard for 90 minutes - that what it feels like for us. But the relief when we make it to the final song and nothing has gone wrong and we’ve kept in sync with the whole film is fantastic.

(((o))): 65dos seem perfectly suited to scoring films. ‘Wild Light’ even has that feel about it for me. Are you open to more opportunities to either re-score or even create an original soundtrack for a new film.
Thanks. We agree and are open to everything. There’s some exciting projects that are hopefully coming to fruition soon, but we’d love to do more.

(((o))): 65daysofstatic appear to be a band that releases records so you can play live. Rather than a “we need to tour to promote this album” mentality. Does performing live always influence the writing/recording process?
I’m not sure if I’d describe our approach exactly like that. We’ve just learnt some lessons doing this a bunch of times, i.e: don’t make a record that you can’t play live, but don’t forget to make the most of the almost infinite possibilities that recorded music offers you, especially if you’re making weird, instrumental music that’s quite noisy.But yes, performing live always influences everything because it’s the one time where you get to experience a real, tangible connection with people. (At least as far as music goes. I’m working on experiencing that with people in other walks of life without needing to stand on a stage to do so).

(((o))): Fall of Math is being re-released both on Vinyl and special edition cd. It’s obviously still important to acknowledge lots of people have a need for vinyl or even cd formats even in times of declining sales.
Yeah. ‘Need’ is a pretty tricky word. Do people really need more vinyl? Do they even need any more new music, never mind a re-issued record?Might be going a little bit off-message there. I’ll try again.Sure: it’s better than hawking t-shirts to people or selling your music to adverts, which is the grim reality of band-survival these days. I believe in the music and I absolutely believe that the psychological ‘weight’ of owning a physical manifestation of an album affects the value you place on it in your life. It’s all bundled up together in our brains. Albums are always about more than just the music that’s on them, it’s the artwork, the liner notes, the experience of doing something to make the music present itself, whether it’s buying the record from a store, putting it on a turntable, putting the cd in the cd tray…It’s not the object that should be romanticised in my opinion - that really is just more plastic junk however pretty it might be - it’s the ritual and ideology that comes with the objectification of music that’s important. The thing is, that only exists in the brains of people who have learnt to appreciate it. I don’t know if that will necessarily be present in the minds of 15 year olds who have always had more or less the entire history of recorded music at their fingertips for free. I’m not saying this is a good thing or a band thing, but I am saying that it is a thing.

(((o))): Wild Light was voted Album of the Year 2013 for this website. In my view much deserved in a year of many exceptional releases. Have you been pleased with the reaction to it and how it’s been going down live?
Thanks. The reaction has been great and although it took us a while to fully work out how to best translate it into live shows we’re really happy with how the new songs have been received. The only downside, (and it’s all just relative - we know how lucky we are to still be releasing records in the first place) is that even despite the crazy-good press that Wild Light got all over the place, very little has changed in terms of us being able to keep our heads above water. The industry is closing in on itself as it collapses and if you’re a band who has not only never been cool, but are also now on your sixth album and still stubbornly sticking around, it’s harder than ever to find ways to reach new audiences. This makes us infinitely grateful to the 65 fans who continue to stick around and be interested in what we do. Please continue to spread the word. Share our music for free if it helps.

(((o))): It’s already been pretty relentless for you since ‘Wild Light’ came out. Will you be starting to think about the next record or have you more plans still before moving onto the next record?
We are thinking about a new record already, but that doesn’t mean we’ll be getting started on it any time soon. Wild Light was a very different experience to making We Were Exploding Anyway. When we did that, it felt like we had reached the end of some big era of the band. We had no idea what to do next. With Wild Light though, it feels like we’re just getting started being the new 65. The only tricky part will be working out how to maintain that in a world where surviving as a band at our level no longer seems tenable…
(((o))): Thanks for taking time out to talk, is there anything you would like to add?
Yeah - amongst the Wild Light album and touring, we did something last year called Sleepwalk City that we’re really proud of. It was an installation at Sheffield’s Millenium Galleries over the weekend of the Tramlines Festival. We filled a gallery with a huge P.A and then 16 more speakers, all of which were independently controlled, and then put loads of droney noise through them all. There was a looping installation and also live performances. There’s a short documentary about it (below).
Also, as much as we’re looking forward to The Fall of Math shows, we are still touring Wild Light, so it would be great if people came to see it.

*Performing The Fall of Math in full