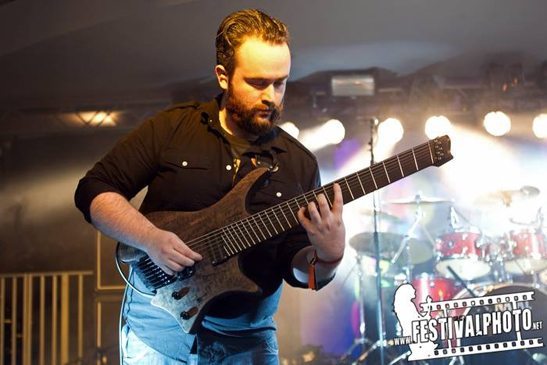 It's a quiet bank holiday Monday, and a number of faithful fans hopped down to see three bands who are pushing the boundaries in progressive and technical metal in quite different directions. I grabbed a chat with Ian Rockett, guitarist and founding member of Shattered Skies, to grill him on the band's upcoming début album, his take on 'djent' and doing cover songs, and the band's Five Year Plan. Meanwhile, Chimp Spanner were making quite the racket during their soundcheck to provide us with appropriate mood music.

Firstly, some background information. One of the many interesting bands to come out of Ireland, Shattered Skies initially came up in the wave of bands fusing Meshuggah's influential polyrhythmic sound with more melodic and catchier pop influences. This resulted in an extremely well-regarded EP entitled Reanimation, which can be downloaded for Pay-What-You-Want. Fast forward three years, and the band are finally on the home stretch for releasing their début album The World We Used To Know, which is set to be 13 tracks across an hour's runtime. It's been a long time coming, but there's finally a light at the end of the tunnel.

The birthing process of this album has been painful, to say the least, but it has fuelled an incredibly productive writing process. Ian claims they have “probably an album and a half's worth of material” on top of the album they've written; whether the tracks end up as a series of EPs or another album remains uncertain, not least due to a change in bass player resulting in Chimp Spanner's live guitarist Jim Hughes being on board. And he's been a busy guy, it seems: “he's sent over a big folder of riffs he's written over the past six or seven years”, so those will no doubt make appearances on future tracks.

When asked about the album's lyrical content, and how the topics have developed since Reanimation, Ian reveals that, “there's a theme through it, about experiencing major changes in your life”. This is rather pertinent to the band, considering they moved from their native Wicklow in Ireland to Croydon, London, during the process, and took big risks related to making a full album, as any band does when investing so much time and money. As if that weren't enough change, the band also re-mixed the album as they realized that the style they had gone for was tiring on the ears. So instead of a “harsher, more 'metal' and punchy sound”, Ian says while punching his hand for effect, they opted for a smoother production, which will allow for the less metallic songs to shine through as well.

What comes across strongly when Ian describes the album is that Shattered Skies are, both consciously and unconsciously, stepping away from the tech-metal scene. He insists that the transition was natural, and that tech-metal has settled into their taste with the other elements rather than a stand-out component. Clearly it has done; “the 8-string guitar isn’t just constantly chugging, there are songs with clean guitar on it, some of which are predominantly clean, ones that are more funk-groove based as opposed to tech-groove. There’s a song with a waltzy feel, and one that’s a ridiculous 12 minute prog epic that goes theatrical in the final bit”. And not a harsh vocal in sight, it appears. Granted, the harsh vocals only appeared momentarily in Reanimation, but Ian admits that part of the reason for their absence is that “I don't really like doing them, I'm not very good at them” and vocalist Sean Murphy, being from a pop and musicals background, was even less suited.

But there's an underlying reason for their absence, which can be detected when the dreaded 'djent' term arises in conversation. Although metal still figures in Ian's listening habits, this particular niche corner has become a bone of contention. After the golden age between Mnemic/Sybreed and Periphery/Tesseract, he describes himself as “jaded...most of the stuff after that [era] does nothing for me. No connection emotionally or creatively”. Instead, he feels the band have evolved to become their own entity; he remarks that the best compliment he's received regarding the new album is that “it sounds like Shattered Skies”.

This unique sound has allowed Ian to embrace many other styles of music, and he honors these with the sometimes unpredictable covers the band pulls out. “It's a bit of fun”, he says grinning, “it throws people off”. You're right, not many prog/tech metal bands can make Pendulum's Propane Nightmares and Europe's The Final Countdown work, but thanks to Sean's versatile voice they always go down a storm live. This partially stems, Ian reflects, on an Audioslave concert he saw years back where they brought out a cover of 'Seven Nation Army' by The White Stripes “for no apparent reason”. And even as the band's repertoire grows, their love of covers won't stop. Ian reveals that the band are gearing up to head into HVR Studios to record a live performance video. They've taken inspiration from Tesseract, who recorded two lengthier songs as live videos, and are aiming to do two as-yet-undisclosed songs along with a cover of Muse's old classic 'New Born'. Ian explains, “some people said we have Muse-esque qualities in our stuff”, so the song is a nod to that, and perhaps will generate some crossover interest from Muse fans.

When not making covers and writing prog tracks, Ian and Sean also spent some time with a piano, reworking Reanimation material into a stripped back and softer approach cleverly titled Pianomation. They débuted a song from this live last year at Hard Rock Hell Prog in Wales, and when asked whether acoustic or piano shows were on the cards, Ian gives a confident nod, adding, “there was talk of us doing something at the Barbican Theatre”, a place renowned for its fantastic acoustics. But that's on the backburner for now, as the main focus is getting the album out and putting on some more 'traditional' shows. They're sick of the studio, and it shows in the way Ian looks back fondly at their Bloodstock performance two years ago, and how by pure chance a sound guy from Ireland ended up mixing their set for them, resulting in a stunning-sounding performance. Nothing like the luck o' the Irish.

Looking the future, Ian states that Shattered Skies' five year plan is far from set in stone, but the band are looking into a few promising options. He divulges a couple of them, mentioning that the album will be out by the end of the summer, either via a label or self-released with support from the renowned Hold Tight! PR. After that, the intention is to “get a bit more touring under our belts” through Europe and elsewhere, and then start shopping for a label, which will give them a sense of security and extra support if anything, although it's not the “be all and end all” of their career.

We wrap up the interview as Chimp Spanner are blasting their way through 'Bad Code', providing a taster of the show that was to follow later. A live report of the show will follow.

Many thanks to Ian Rockett and Nick Azinas for the interview opportunity. You can follow Shattered Skies on Facebook here.