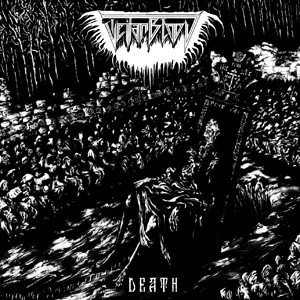 Out on May 13th through

There’s been a major changing of the guard in death metal. When 80's thrash began to birth its mutant bastard everyone agreed - yes, it’s uglier and meaner. It still seemed to bend toward a similar goal, however: bands wanted to play music faster and louder and more evil because it feels good. There was a catharsis sought after in death metal. Maybe the mind of a metalhead is wired differently from others, but people tapped into that frequency often agree that it’s relaxing to throw on Entombed after a tough day at a crappy job. Fast-forward to today. Maybe it’s the logical progression of the “faster, more evil” mindset, but today’s crop of death-indebted bands do not seem as eager to seek catharsis. Teitanblood only seems content to seek one thing: infliction. With their new album, Death, it is clear that Teitanblood does not want you to feel release. If they’re going to feel pain, then god dammit - everyone is going to.

This is not necessarily a revolutionary idea, there has been a shift in metal that can be somewhat traced back to the late 90's away from more mosh-friendly fare into music that gets under the skin. Claustrophobic, even suffocating production - where the instruments all seem to be part of one throbbing horrid mass rather than separate entities - have become increasingly en vogue. Among metal fans, riffs can be called “disgusting” or “filthy” in reverent tones. Teitanblood takes this to extremes, not shattering the mold but definitely raising the stakes in terms of inducing anxiety through music. Again: this is music that inflicts pain - it does not heal.

Still, it is important not to forget something about pain. Some people really like it. The opening salvo of Death’s first two tracks leave the listener with no sure footing that creates a sensation like waking up in mid-fall down a bottomless pit, but by the song 'Plague of Forgiveness' the album has taught you its language and invites you deeper into the manic logic of its grooves. What is disorienting at first starts to make a sort of sense, and by the downtempo swagger of 'Unearthed Veins' the queasiness is all but gone as the album primes you for the full-on mosh of 'Burning in Damnation Fires'. The music is still miles away from being accessible, but it starts to hurt in that good way, like sucking on a sore inside your cheek. Like poking at a bruise.

In this way, Death demands repeated listening. Each time you go back to the beginning and travel through the gauntlet, the grooves and riffs of these sprawling tracks (most of them approaching or exceeding the ten minute mark) begin to reveal themselves to you in ways that are obscure at first listen. It would not be surprising for this album to gain a wider audience a few years from now, it is an album that in many ways is perfect for re-discovery rather than hooking new fans immediately. While on the surface Teitanblood might sound primal and visceral, the music here is oftentimes like a sophisticated puzzle - one whose solution is revealed through exhaustive devotion to its ugly and brutal aesthetic.

In many ways this album is a series of contradictions. Both ugly and refined, primordial and sophisticated, Death refuses to exist solely in one form at any given moment. By its grand, crushing conclusion the pain that is so constant throughout is revealed to be the kind of pain that comes from a sort of re-programming of the brain. It’s the pain of new pathways being dug into the trenches of grey matter; in the end it leaves you with new skills you didn’t have before. New skills for listening and thinking. Ways to see the world in a frightening and exhilarating new light.