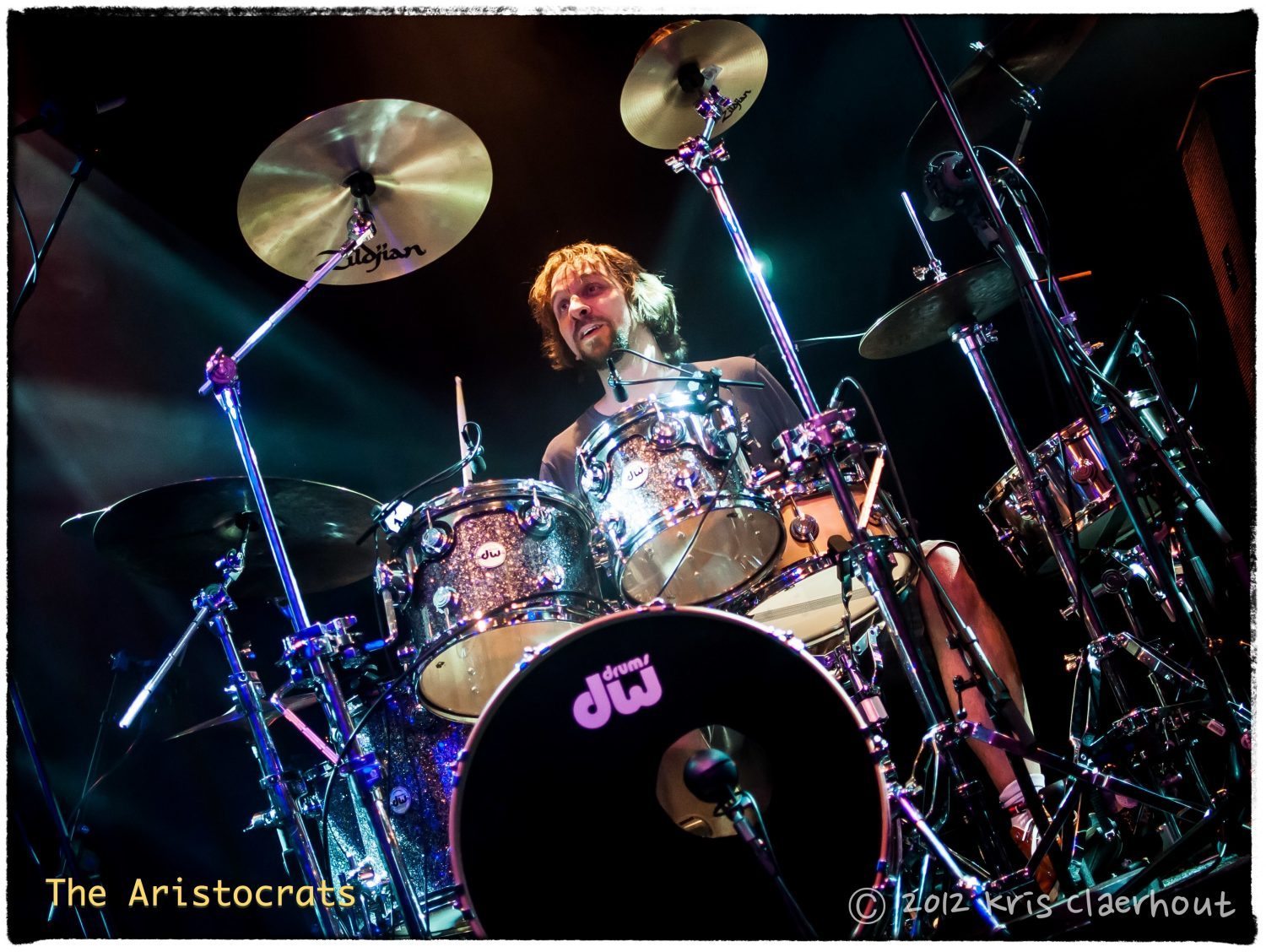 Even if you weren’t aware of it, chances are you’ve heard the drumming of Marco Minnemann. He was in the running for Mike Portnoy’s replacement in Dream Theater, and has provided his incredibly skilled drumming to many other projects – including Necrophagist, Ephel Duath, The Aristocrats (with Guthrie Govan and Bryan Beller), Steven Wilson, and Tony Levin and Jordan Rudess for last year’s instrumental highlight Levin Minnemann Rudess. But he is not only a drummer; also playing guitars, keyboards and vocals for his solo material. I sent some questions through to Marco Minnemann (currently touring with Joe Satriani) earlier this month to discuss his latest solo record EEPS, out July 9 through Lazy Bones Recordings.

(((o))): Although you are best known for your drumming, on your solo albums (including the upcoming EEPS) you tend to play all the instruments. Is there a particular reason the drums became the focus of your work?

Marco: Hmm, well I started playing drums as my first instrument to be featured in band work. So it sort of became the instrument a lot of people know me for, have heard me either on recordings or seen me live first. Even though I wrote and played other instruments as well on all my solo albums since 1994, the picture of me being a drummer somehow was prominent. And hey, I also do play drums on these albums, so it's ok I guess, hahaha.

(((o))): Looking at your intimidating touring schedule - playing with Steven Wilson, The Aristocrats and Joe Satriani - do you find yourself consistently writing while on the road, or is it only something that you do when on break from these bands?

Marco: Oh I make myself at home on the road and bring recording gear with me as well, so that I can translate my ideas. See, if the travels are arranged nicely, then it can be actually very comfortable and inspiring to travel.

With Joe for example we get driven straight to the show and then back to the hotel. So, there's a lot of time throughout the day.

(((o))): Following on from that, is there a method to how you distinguish between what becomes a Marco Minnemann solo piece and what becomes a song for The Aristocrats, or Levin Minnemann Rudess?

Marco: Yes. I purposely write pieces 'tailored' for each musical adventure. On my solo CDs I write with orchestration, also keys, strings or multiple layers of guitars/vocals.

With the Aristocrats I have to write for a trio, or write things that can be translated as a trio. Same goes for LMR, eventhough that one was designed to be a studio project in the first place, so there are no instrumentation it stylistic limits as well.

(((o))): The instrumental sections of the recently released track “OC/DC” are intense! You play only out of tune instruments, solely relying on their rhythmic placement for anything vaguely resembling a melody. It’s a great experiment! I understand other songs on the album were composed similarly; what gave you the idea to venture into this territory, and is it something you’re keen to do again?

Marco: Oh that idea sort of fell from the sky. I had this one riff in my head that I wanted to play with a detuned guitar. And then I thought, hmm...wait...what if I use that guitar on the whole song, and why don't I randomly detune all the other instruments for it, too, haha. The result sounded so weird and absurd, I just laughed and was very curious to see on how people would react as well. Sure enough, after posting the video which features the amazing work of Eeps co-producer Scott Schorr and his team, there were all kinds of reactions. Some thought it was genius and they've never heard anything like it, some thought it's the ugliest thing ever ;-). It seems difficult for some to absorb and accept material they can't compare of place in a certain box. But that was exactly what I wanted with that tune, or 'out of' tune, haha.

And yes, there are 3 more pieces on the Eeps album following a similar concept.

(((o))): Beyond these more experimental pieces, is there anything else you have tried to accomplish with this record that you’ve not done previously?

Marco: Very much! I worked with Scott Schorr, who also co-produced our LMR album. He has great ears and ideas, and embraces any kind of unusual stuff it seems and is up to no good, hahaha. It was almost like, the outer and weirder the pieces I delivered, the more he loved it. I mean, just look at the videos he came up with, right? I think we're a good team :-). We also arranged a few of the songs on the album together.

(((o))): Your last effort with producer Scott Schorr was on the excellent aforementioned Levin Minnemann Rudess. Looking back at your previous solo albums, they’re mostly mixed entirely by you. How do you feel having a co-producer influenced the music on EEPS?

Marco: Oh, I guess that one I answered on the previous question. But yes, it felt great having an additional pair of ears. After hearing your songs a lot during the writing/recording process, there's risk of sometimes losing perspective or objectivity a bit.

(((o))): For people who are first experiencing your solo work with EEPS, which other albums of yours would you recommend they check out?

Marco: All of them :-). Ok, well... Here are some of my favorites: 'Evil Smiles of Beauty', 'A mouth of god', 'Symbolic Fox' and maybe 'orchids' and 'housewifedogandtwokids'.

(((o))): So Marco, are there any other upcoming projects in the pipeline? Will you continue on with Steven Wilson now that he’s working on the follow-up to “The Raven Refused To Sing (And Other Stories)”?

Marco: Yes, we will be recording the new Steven Wilson album in September. Also, a new Aristocrats album in will be on the way soon.

(((o))): Now for a more selfish question – do you have any idea when you’re next going to tour Australia?

Marco: Oh yes. We will be in Australia most likely in November with Joe Satriani. And then with the Aristocrats in 2015.

Thanks so much for the good questions, hope you got something out of this 🙂

Thanks very much for your time and I can’t wait to hear the whole album!