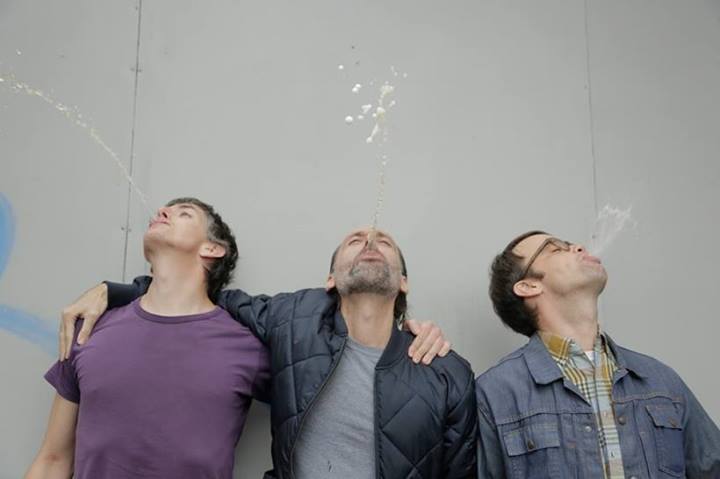 (((o))): Considering your long career making music together, coupled with the sometimes long waits between releases, what is the magic formula for deciding “Okay, we have something else to say.  Let’s get together and make a record”?

Nathan: In this case the magic formula mostly consisted of the head of our label calling Phil last November and saying, "I need everything including artwork and promo photos by mid-December."  It kind of kicked me out of my mindset that no one was waiting on the edge of their chair for a new Trans Am album.  At least one person was.

(((o))): Your releases always seem to have a sort of specific, unifying theme, whether it be sonically or thematically (such as the pulse-pounding new wave perversion of 2002’s TA or the strangely menacing Futureworld).  Is there any specific sound or motif that felt like it particularly unified the songs on Volume X?

Nathan: I think Phil provided the unifying sound with his e-bow.  An e-bow has an electromagnet that vibrates a guitar string creating almost a bowed effect more like a violin or cello.  It adds a lot of atmosphere to a number of songs.  Personally I'm not a huge fan of unified albums.

(((o))): In addition to each album having its own unique character, it is also clear that Trans Am is one of the few bands with its own, almost immediately recognizable, aesthetic, even while exploring new ideas and sounds.  There is always something that makes a Trans Am album sound like a Trans Am album - be it through the propulsive percussion, or the effect-treated vocals, or some of the other trademarks of the band’s sound.  How much of that is conscious decision-making and how much of it is just the natural result of three people who have worked together for so long?

Nathan: We aren't a band that hides from what the critics are writing about us, though we aren't really seeking it out either.  But after 9 albums' worth of material and reviews, we have a sort of consciousness about what we sound like and what other people think we sound like.  My main concern is that we will get too comfortable with it.  Our third album didn't sound anything like the second.  And the fourth was different from both.  But it's hard to keep that up.  I'm pretty happy with most of what we've done but it's a lot easier to become self-satisfied at this point.  I worry about that.  Because then we"d have to stop playing together.

(((o))): Phil Manley has spoken before about the bands' writing process being a sort of series of recorded jams that are then whittled down and analyzed as far as what will make a good song and what won’t.  Was that more or less the same process used on Volume X?

Nathan: The process that Phil described has become the absolutely dominant one for our more recent albums because you can just start up the computer and jam without worrying that the tape will run out.  For Volume X, I think we all came in individually with more material (that resembled the final product) than in recent albums.  That's a more healthy way to work.

(((o))): Assuming your work is the sum of these edited, compacted jam sessions, how much recorded material have you accumulated that will never be heard as an official release? Do any of these snippets ever crop back up down the road or become re-contextualized?

Nathan: We have music that rolls over from album to album.  One of the tracks on Volume X (Backlash) is from a totally different sound tracking project that Phil was working on individually.  I wanted Volume X to be longer  - maybe even a double album.  There's a lot of material that was left on the floor.  It might crop up again.  I like cramming lots of shit in.  The world is crowded with a lot of shit, why shouldn't our albums be?

(((o))): Speaking again to the longevity of your career, when you all get into a room together specifically to play and write, is it fairly intuitive at this point?  Is there a noticeable benefit to being collaborators for so long, or do you still have moments where you think “I am not sure what I am doing right now”?

Nathan: There are lots of moments when I simply can't come up with anything.  Since we are spread out geographically, there's more time pressure when we can get together.  It's pretty frustrating.  But making music is supposed to be hard at times, right?  You don't have to bleed for your art, but it should be confusing.  We're not just clocking in.

(((o))): Volume X strikes me as, in many ways, a quintessentially Trans Am album.  By that I mean it very much sounds like an expansion of your sound, without in any way feeling like it is catering to, or even very aware of, other contemporary trends in music.  Is there any sort of purposeful isolation involved in creating your music?  Part of what is so exciting about the bands' music is that every album seems in some way totally out of step with what is going on in current music, as if Trans Am is traveling along its own timeline where music history is almost purely a feedback loop of your own music and ideas.  Is that a totally off-base way of thinking about your music?

Nathan: Early in our touring life, we took mushrooms before an interview session for some Dutch radio station.  I don't know if they expected some earnest, thoughtful lads who were part of the earth-shakingly intellectual post rock movement.  But what they got were responses like "well trans am has a sound and... It's our sound."  Still holds up, right?  We do try to avoid trends, though.

(((o))): What about Volume X stands out to you in terms of what Trans Am has accomplished in the past that raises the stakes for the band sonically?  Is there something on this album that you think people maybe wouldn’t have been able to find in your previous work, or even in anyone else’s?

Nathan: Vocal harmonies.  Not as many as I would have liked, but there is more focus on vocals than before.  Voices are difficult to get right.  I'm not saying we have, but I'd like to lunge that direction a bit more.

(((o))): How important is it to surprise yourself as a band?

Nathan: New material is the only way I can play ten shows in a row.

(((o))): There are some incredibly heavy moments on your new album, especially the track ‘Backlash’.  While incorporating elements of a broad range of music is certainly not something new for your band, where do some of these heavier influences make their way into the sound?  Are there any conflicting influences between members of the band that serve to complicate the collaborative process in an interesting way?

Nathan: I already mentioned Backlash.  I like that track.  I think it is really fun.  Phil and Seb are much bigger metal fans than I, but I did spend much of the Volume X sessions looking at a photographic history of the 1980's Bay Area metal scene.  And two of the best shows I've seen - we were all there - were Manowar.  Really remarkable.

(((o))): After your current US tour, do you have further plans to tour for this record?  Where can people see you next?

Nathan: We are coming to Europe in November - dates are already announced I think.  We're trying to go to South America sometime in 2015.  New Zealand/Australia are always good.  Asia is a bit less likely, but would be amazing.  We've got more ambitions than time.

(((o))): What can we expect in the near future from the Trans Am camp?  Are you guys working on any thing else?