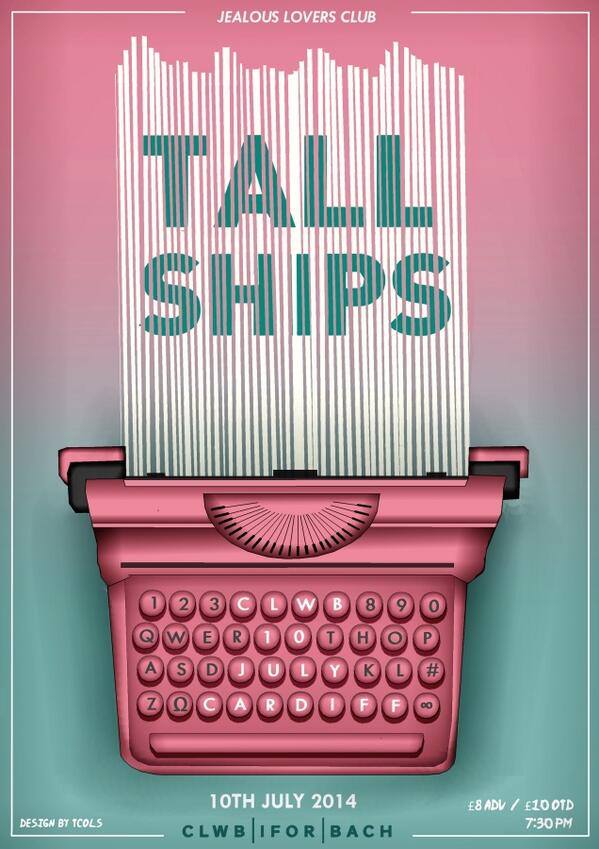 You know when there's one band that just don't release a song that you think, 'Well gosh...that could be improved in so many ways.'  There's not too many of those out there for me.  However, I try and make the odd exception, Tall Ships being one.  Ahead of their string of live dates that the band are embarking on this summer starting with Cardiff this very Thursday, I managed to catch up with Ric - singer and guitarist of the wonderful Tall Ships.

Cooked and knackered.  Spent all day in the baking sun pointing a patio.  My back is done.  All showered and clean now though and drinking a beer so I can’t complain.

(((o))):  Thanks for spending the time to have a chat to us.  Before we get stuck in, I just want to mention "Angels" at 2000 Trees - what a fantastic sing along.  I always wondered if you heard the two crazy Irish blokes stood next to me, screaming the lyrics back at you.

Ha.  That was a very long time ago.  Afraid I didn’t hear the two Irish blokes shouting over everybody else.  That was a fun thing to do.  It’s just one of those songs.  You sing the first 4 words ‘I sit and wait’ and then EVERYBODY knows the song and sings along whether they hate it or love it.  I’d like to say we do it ‘ironically’ but to be honest I actually pretty dig that song.  It’s come back to haunt us a bit now though as every so often at one of our gigs in between songs some joker will shout out and request it.

(((o))): For our readers who don't know a whole lot about you guys, could you give us a little bit of background on who you are, how you met as a band, and maybe who your celebrity crushes are?

We were originally three guys who met at Falmouth University studying photography and illustration, but over the past few years we have acquired two other gentlemen.  One of whom we stole from a famous rock and roll band we played with a whole lot, and the other (a very recent addition) just happens to be a very good friend who plays in another rock and roll band we’re friends with.

(((o))): Now, to the debut album.  It seems like only yesterday when I sat down in my kitchen, beer in hand, to listen to Everything Touching for the first time.  After falling in love with T=0, I was so insanely glad to discover that the entire album is a flippin' treat.  Did you enjoy releasing it?  And also, what is the story behind the albums' title?

Yeah it felt great to finally put out an album; to clasp a 12” record that had engraved within it a collection of music you’ve put so much thought, energy, effort, heart and frustration into.  The response was pretty incredible too.  We were pleased that people really got it.  The title was actually the original working title for T=0.  The song was based loosely around the idea of the big bang and that infinitely small point in which all the matter that exists was contained before it exploded.  So the phrase everything touching came quite literally from that idea of when everything that currently exists was once touching.

(((o))): The artwork for the Everything Touching is gorgeous.  Getting it down on vinyl must have felt like an achievement in itself?

Absolutely.  It was design by our wonderful friend Harriet Bridgwater who has designed every sleeve / screenprint / t-shirt since we started.  The cover was created by pulling a mix of colours over a piece of paper, and I think it was the 4th attempt.  It looks great and we all felt it worked well with the ‘Everything Touching’ concept.

(((o))):  I loved the old There Is Nothing But Chemistry Here, which I still play to death this day.  So, I was pleasantly surprised to see Ode To Ancestors was re-visited, re-jigged, and re-recorded for the album.  The same goes for Books.  What made you decide to re-do these?

We simply felt like we hadn’t quite got those songs right yet.  The original Ode version was essentially a demo, we wrote it whilst recording, so we were keen to give it another shot and I think that it is definitely better for it.  The same goes with Books but I know a few people miss the completely over the top synth line but we when we were re-working it, we were just like ‘nah’ this HAS to go.

(((o))):  What I find amazing is that Everything Touches somehow flows perfectly, from each and every song.  Ode To Ancestors and Books don't stick out as old songs at all.  When you play live, you seem to have a fair few oldies scattered in your sets.  I imagine it is pretty nice to be able to mix old and new material together?

For sure.  It’s also what a lot of people want to hear and we want people to have a good time so we’ll play old ones.  This is changing now though as we’ve got a whole bunch of better new songs we’re going to start playing.

(((o))):  And I have to ask about the last song on the album.  The pumpin' dance monster that is Murmurations - how did that come about?

As a band we tend to use a lot of loops, layering up sounds and parts so this was essentially us pushing that to the limit.  It’s a 9 minute song with the same 4 chord sequence throughout.  Every time it goes around we’d layer up another part and try and keep it building.  It was mostly us mucking around in the studio but I think we were really pleased at how it came out.  It really doesn’t feel 9 minutes long (we think…).

(((o))):  I think it's fair to say that in Murmurations, as in a fair few of your other tracks, looping is a fundamental element. I really admire your ability and balls to work with one chord progression or rhythm, cycling round it and adding layer upon layer of detail, finely tuning and tweaking parts as you go.  How important are the loops in terms of composition?  Are the songs written around them?

Originally they were hugely important in the composition and structure of our tracks.  A lot of our songs are quite linear and repetitive due to it, Murmurations being a perfect example.  But it’s something we’ve made a conscious effort to move away from and pretty much all of our new material doesn’t really feature any loops and the songs are feeling much more dynamic and exciting for it.

(((o))):  In regards to live performances, do you have a favourite song(s), perhaps something in your arsenal that you feel you can really rely on?

Plate Tectonics is one which always feels amazing.  In a venue with a proper PA when the song drops and the whole room shakes, that feels awesome.  Oscar feels pretty great too, it’s one to get completely lost in.  The sing along ones like Vessels and Ode are usually the best though if everyone sings along.  We love that.

(((o))):  Everything Touching seemed to be incredibly well received.  It seems wherever you go, people get excited.  A few years back, when I first saw you live, you were playing to a jammed packed tent at 2000 Trees Festival.  Last year at ArcTanGent, you all seemed to be close to tears with how lovingly the crowd received you.  You're playing Cardiff on the 10th of July at Clwb Ifor Bach for Jealous Lovers Club, who you also played for last year to an absolutely rammed out and sweaty Buffalo Bar - and from what I can remember from that gig, nearly everyone in the room was dancing, which is rather rare for the reserved people of Cardiff.  Does it amaze you how crowds are so responsive and connect with you so well?

Yeah it’s pretty incredible but we love it.  It feels so good to have people come to your shows and be so excited by what you’re doing.  We really feed off the connection and interaction with the crowd and it’s definitely our favourite part of being in a band.  We’re incredibly grateful to all the people who come to our shows.

(((o))):  You've got a fair few dates lined up for over the summer, including 2000 Trees and ArcTanGent.  It's got to be pretty special to be back at both these sister festivals?  I certainly cannot wait for ArcTanGent - there's a huge hype about this year already!  You've also just announced that you will be at Beacons Festival - pretty special lineup for that too.  How does it feel to be in such high demand?

Yeah we can’t WAIT to do Arctangent again.  We’re main stage this year, which will be a first for us so we’re incredibly excited.  It feels good to be playing so much without having released any music for nearly two years though.  We’re definitely hoping there’ll be much more next summer once we’ve got the new record out!

(((o))):  Outside of Tall Ships, are you guys busy with other musical projects?  I saw Ric did a solo set at this years The Great Escape.  How did that go?

It was great, really refreshing to do a whole new take on the old songs.  I heard a couple of people cried during the set so that’s either a very good or bad sign... Matt plays in our new guitarist Al’s band called Vincent Vocoder Voice, who are awesome.  Well worth checking out.  Jamie Field our keyboardist works as a producer (he did our 2nd EP and first album) and he’s always got exciting recording projects on the go.

(((o))): Do you guys find any time to do much outside of the band?  Say, a day trip to the spa or something?  Not that I'm asking to tag along or anything...

Not really.  Just working full time to catch up on all the money we’ve lost being in the band.

(((o))):  Other than the live dates you've got sorted, is there much in the pipelines for the near future that we can look forward to?

ALBUM 2.  It’s coming.  We’ve written a whole bunch of songs we’re very excited about and we can’t wait to get it recorded and released.

(((o))):  Thanks so much for taking the time to chat.  One last, and probably most crucial, question - do you guys have a band biscuit?  A certain type of biscuit that is brought to every practice?