Tristan Lathey recently reviewed the new Vintersorg album Naturbål, which he described as "having a lot going for it. There is so much happening that it will surely excite the avid folk metal fan and maybe even inspire others to listen to this very unique and diverse style of metal." Tristan asked Mr V a couple of questions to find out more.

(((o))): So, how would you describe your new album Naturbål?

Mr V: Well, it’s always hard as we tend to blend a lot of different type of musical elements into the mix. But if you’re familiar with Vintersorg it’s a good start and this album is strongly connected to the last two albums music and lyric-wise. Still, Naturbål is leaning a bit more to the Scandinavian folk music that has been a good portion of the Vintersorg past. It’s maybe also a bit more straight forward and with a very epic touch. You have the big soundscapes but also small details along the way…very hard to actually put into words.

(((o))): This album embraces a lot of your previous styles but it seems to be more naturally flowing than previous albums. Do you feel like you are growing as a songwriter?

Mr V: I guess with every song and album written it makes me “better” as music has so many possibilities to explore, but also to take notice of while writing. I go by heart though and I’m useless when it comes to music theory… Ok, I know some of the tricks but for me it’s about the emotions, not the calculation. So, I think I’ve grown as a writer, composer, arranger, engineer, mixer and masterer of the music we record.

(((o))): Naturbål is the third instalment of your elements series which tackles 'Fire'. So next up is 'water'. Do you do a lot of research into your subjects?

Mr V: I do a lot of research about the subject to get everything correct but it all starts in my own reflection and experience about the stuff I write. Of course I can write about things that I want to experience and see with my own eyes and some part are like that. Often thought I have relation to it from a real event between Man and Nature…and with water I have so much to dig into.

(((o))): How much comes from personal experiences?

Mr V: As I said I most of the time have a personal reference to the thing I write about, it’s then a self-going-process and I don’t have to think that much. I just go by the emotional drive and the passion I have to put that stuff into words. It’s for me the same way as it is with the actual music, it’s about what lives inside “you” but “you’re” not aware of it, but of course you have to think as well.

(((o))): This album is sung entirely in Swedish. Previous albums have been in English but it has been a while since we have had an English sung release. Do you find Swedish fits your music and concepts better?

Mr V: It’s about to have the best of two worlds actually. In the other bands I’m involved with we write and sing in English and I love to do that. But when we did Vintersorg in English I somehow felt that something was missing in my artistry. So, I just tried to write some Swedish lyrics again and it was the ultimate thing. Now I have both sides of that creative “coin”. It’s simples as that and I still really enjoy the Vintersorg songs and albums we did in English but for the moment, at least, I just like to also write in my mother tongue.

(((o))): Do you think that your English releases have a different feeling behind them?

Mr V: I don’t know if it’s the language, but those albums are a spawn of a more progressive side of this band and therefore many people say that the English albums are different. Personally I think that it’s very much the music that makes them different and not just the linguistic approach. But when you add them together you get a different type of atmosphere I guess. 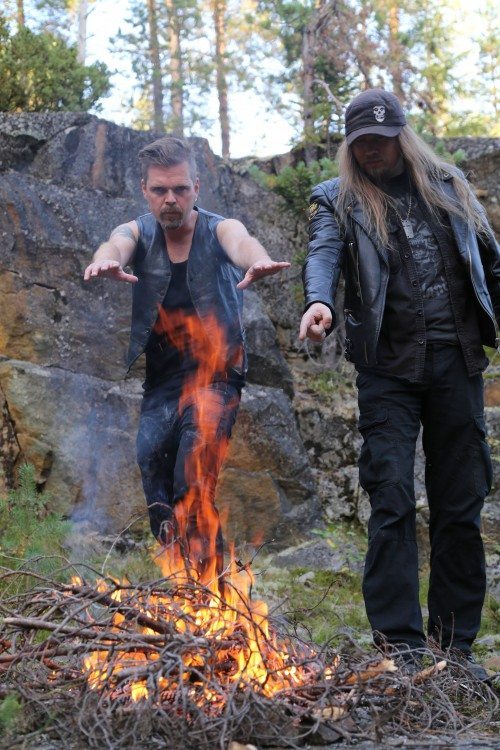 Mr V: It’s a bit hard to really tell as I try not to take too much influence from other bands, but as I kid I guess I was influenced by a lot of the heavy metal bands of the 80’s along with the symphonic rock band of the 70’s, as well as a lot of folk music.

(((o))): You've been 20 years in the business. How has the scene evolved since you started?

Mr V: I think a lot has happened, some good other the opposite. The good side of it all is that people can get in touch with music they are interested in on totally different scale as back then the whole internet-thing was not present. The downside is that people don’t buy that much albums anymore it seems. I know the metal heads are “better” of doing it than the ordinary guy but still it’s a very different situation. People can nowadays find their musical friends all over the world via forums, Facebook and so on and that’s just perfect. It’s also a much more open minded metal scene now compared to 1994, then it was all about being “true” and that kind of stuff. I’ve always liked music with a lot of angles and contrast so I like the open minded climate that has grown forth since back then.

(((o))): Do you find yourselves playing to a different crowd nowadays?

Mr V: It’s hard to tell…I feel somehow that the audience are more passionate in a way now…as I get in touch with so many people through the social medias and they tell me what they feel about the music we create. I think you could say that people was very passionate back then as well as they could take an 10 hour drive to make it to a concert…and that may be a bit different now…still I get much more direct feedback now.

(((o))): If you were describing your music to someone new to the genre, how would you describe it?

Mr V: That’s the thousand dollar question. It’s a mix of metal, folk music, rock, progressive and symphonic rock and so on…the list is quite long. Still, I think that Vintersorg has a unique sound and we’re just going to explore new sides of our foundation.

Mr V: I’m writing new music on a daily basis here and the plan is to record it on the same daily basis. So, we’ll just continue and hope we can make another twenty years.

Mr V: We’re not a live act at this point in time due to the fact that we’re only two guys, our job-situation, family and so on.