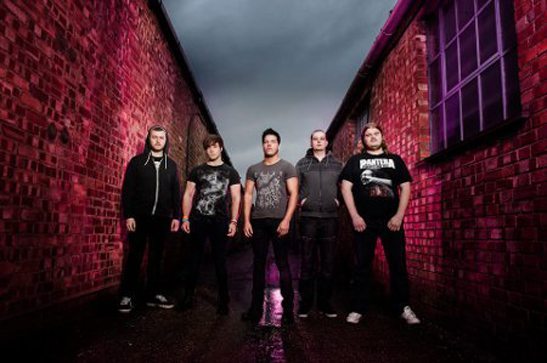 No Sin Evades His Gaze

Please welcome No Sin Evades His Gaze to the world stage. One of the most promising bands to emerge from the tech metal scene from pretty much since the genre's inception, they have both youth and experience on their side, and a very well-crafted début album entitled Age Of Sedation. While it was unreleased at the time of this interview, it has since dropped on Bandcamp and comes highly recommended. I got the chance to speak with vocalist James Denton and guitarist Dan Thornton about the band's background and lyrical topics, their impetus and opinions on the metal community.

Being such a new band, the starting point of the conversation is their origins, and how they got into this style of music. James is the groove-loving metalcore guy, having previously sung in a “Killswitchy, Triviumy” band called Ravenface, utilizing his rasping growl and clean-cut singing to great acclaim there. Conversely, Dan Thornton played in Black Mire, a “tech-deathy thing that wasn’t all that tech-deathy”, and now gets to show off his licks and riffs on tracks like ‘Roll Up The Royalty’, or the muscular breakdowns in ‘Filth’. They also reveal bassist Moat Lowe is a massive proghead, as I would discover later in conversation with him about his love of King Crimson and other old prog bands.

However, despite this “mish-mash of previous bands” as James terms it, it was inevitable they would move onto a different style no matter how much they love their chosen genres. “Tech-metal seemed like the natural thing if you’re into Pantera and Lamb Of God's groove, you get to a point where ‘this is where this [the genre] has gone’. It’s the evolution.” Lamb Of God crops up a fair bit in our conversation, as Denton names their Ashes Of The Wake album right off the bat as “the definitive metal album for me”. Dan, still in tech-death mode, plumps for the equally excellent Planetary Duality by The Faceless, resulting in perhaps the quickest pair of answers to the 'influences' question I've experienced. James then adds a different answer in the context of No Sin Evades His Gaze, tapping Whitechapel, “either their self-titled or An Era Of Corruption. They are the two albums that really made me want to play in a band like this.”

Moving to the band's conception, the question arises of whether the band or the name came first. “We wanted to start the band first” comes the confident reply from James, with Dan explaining further: “Before we launched this, we were so adamant not to launch the name and then have nothing. We had to have something together so the album hit with the biggest impact.” And it has hit with quite the impact, attracting interest from several high profile metal blogs, Metal Hammer magazine and even The Guardian! Concerning the name, like many others I mistook it for a Christian reference. “We get that a lot, but it [the vagueness] is meant to be there. Who “he” actually is isn’t specified,” likening it to the band name Thy Art Is Murder, even if the actual reference is from a level in the first-person shooter game Bioshock Infinite. 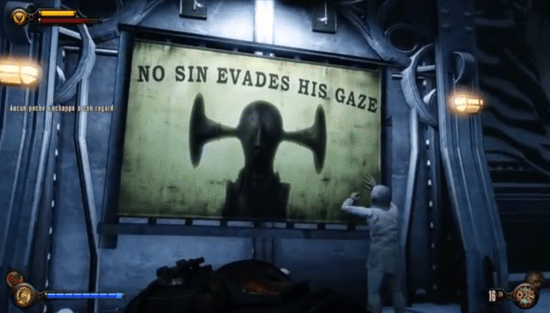 When one takes into account that the band have been together for less than a year, it seems natural that there was a driving impetus which caused the musical direction to come together so smoothly and swiftly. James points towards the band's common attitude: “We all came from different bands that dissolved into whatever. And I think we said 'Here are the mistakes we made, let’s stop them. Now we know what we can do and won’t do. Let’s be really ambitious with this: why can’t we play Bloodstock next year?'”. This prompts Dan to start laughing, and with good reason: the band had already announced their addition to THIS year's Bloodstock bill, an incredible feat for such a new band. This proves James' mentality perfectly: “If you set the bar really high and decide to just go do it, you’d be amazed with what you can do with enough time.” This fierce determination will surely carry the band far.

Speaking of fierce, James is very outspoken in his lyrical content, which has progressed from more introspective topics of before. Now it is “a way to make commentary, draw parallels and observations, as opposed to just “this is my life and this is what’s wrong with it”. He is of the firm opinion that lyrics should be used to convey a message, and feels that some bands squander this opportunity by singing about “killing, raping and stealing, because 'that's metal'”. Instead, he views his lyrics in more general, albeit slightly misanthropic terms: “it’s not about a single person and hating on them. It’s ‘here’s what’s wrong with everything, I think we all feel it but no-one’s really saying it’”. One such example is “We are the children of a dying generation/Medicated, tranquilized/This is the age of sedation” from the title track, a fairly blunt jab at the fact that many people are less likely nowadays to educate themselves about the world around them and what is going on.

This segues neatly into a favorite question of mine, which is what would go on the reading list if No Sin Evades His Gaze were a university subject. Interestingly, the two eschew the usual format of books and instead point to the TV network Russia Today for an alternative perspective. James argues that the channel avoids shielding Western viewers from “horrendous crimes” that are going on such as drone bombings and the like. So by watching this channel, he reasons, they would at least become more educated in the goings-on outside their own doorstep. He rounds off with a very accurate comment: “I think human beings are capable of being incredible, which is even more frustrating when they are disappointing.”

This also extends to the metal community, which is our final major point of discussion. Making it as a band is very much a Darwinian process, but the tech-metal scene has become a very welcoming family over the years. What do the band make of the dichotomy? James answers: “What I’ve seen from when I was younger, is when you first get into metal, there’s a family feel, like “I belong to something that’s different and unique to me”, and then it splits into sub-genres and they all HATE each other, and you think “wait a minute, this isn’t a family, we’re all arguing”. So when we put out our first video [‘Age Of Sedation’], so many tech bands shared it, and I thought “this is really good, to belong to somewhere where there’s a mutual respect”. Many sub-genres could do well to learn from this, because the family feel is integral to what is so satisfying about being part of this metal community, and to know that other bands support what you do is already encouragement in itself.

My last question regarding No Sin Evades His Gaze's plan for the future is met in a rather skewed fashion. Rather than trotting out the usual answer regarding tours and new material, the two give a further insight into the band's general plan: “set your hopes at the top, realistically though, don’t be arrogant about it. But say 'this is what we want to achieve, why can’t we do that?'” Rather than resting on their laurels now that the début album has been launched, the impression they give is that they are going to push even harder, “to continually demand the best of each other. Everyone needs to be onboard on the same level, and if we stick to that, it will be something special.” You're damn right it will be, and they're a band to keep a close eye on.