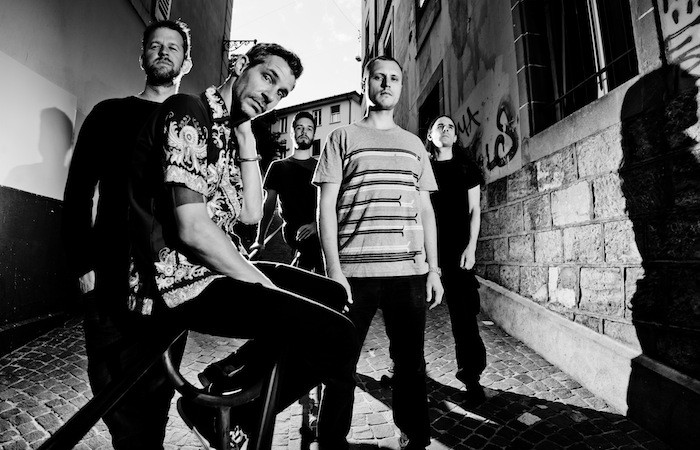 If ever there were a band who make their music incredibly difficult to describe, Kruger are that band. Drawing from an uncountable number of influences, including one particular Swedish band, the result is a noisy cacophony of sludgy rock n’ roll, spiced with a thick and lumbering metallic atmosphere. Their live performances are equally nuts, a cathartic exhalation of riffs and screams, augmented further by the musicians bouncing around like nobody’s business. Their vocalist, a certain Renaud Meichtry, leaves a particularly strong impression as he wanders through the crowd hugging and kissing everyone, after having previously upended a monitor, sat on the shoulders of a crowd member and fetched a beer from backstage mid-set. It is with no small amount of curiosity and trepidation that I go to our scheduled meeting, accompanied by bassist Blaise Brechbühl, who’s in a chipper mood despite breaking a string in the first song. What follows is the summary of a lengthy conversation about the Swiss music scene, how they go about creating records, their underrated influences, and a big bomb of a surprise at the end. We cram into Nightshift Promotions’ office, and set the tape rolling.

Blaise comments on that string break: “It happens every 10 years, and it ended up being tonight. Since it doesn’t happen much, I left the spare bass on the bus because there’s not much space behind, and I wouldn’t need it anyway”, invoking Murphy’s Law. A frustrating way to kick off the show, but he explains the amused grin on his face, saying they’re happy to play. “We really try to enjoy it, because we don’t play much, we have some tours, but they fit to everyone’s jobs.” And there are other reasons to be happy too: they’re touring with friends for the first time in years. Renaud clarifies, “we’ve toured with great bands, but we didn’t know them before. Usually we don’t choose, we just say “we’re available!” and wait for offers to come in.” But this time, they’ve got fellow countrymen Coilguns, who are just as insane if not more so onstage, as our report of the event attests. Renaud explains Kruger’s madness in a rather succinct fashion: “It’s organized chaos [on the album] and onstage it’s unorganized chaos.”

In their native country, being in a band is a very different notion to in the UK. “As soon as you book somewhere, you have a band who’s just got one album, a newcomer, anywhere they play they would get hotel, beers, restaurant, plus a fee.” Very far removed from the case in the UK, for instance, and some would say that this good hospitality is a blessing. But it does come with a price: “You never get famous in Switzerland ever, if you’re not famous somewhere else. It’s all about the glory,” he claims sarcastically. The band do enjoy playing in Switzerland, however they’re aware that to make it as a band, you have to establish a reputation outside the country. “We get bigger audiences in France, for instance, than in our home country”, Renaud claims, although that’s more due to the tiny size of Switzerland than any reflection on the people.

Having spent some time with their fantastic new album Adam and Steve, I have to enquire about the process of creating the record. Is it as nuts as the way their live show unfolds? “Never anything musically about what we do is foreseen or planned. We jam forever and ever,” is the response, and it makes complete sense. They acknowledge that it’s a messy way of doing things, but it’s worked so far. “Everyone has his own speciality; one is better at making new riffs, the other one is playing atmosphere”, and the parts slowly fall in place. However, the wiry Renaud expresses a mild bit of impatience at his fellow bandmates and how long they take over riff composition. He complains (in an affectionate way) that “those guys can spend 2 hours playing one 10-second riff, for fucking hours.” Blaise attempts to defend himself, saying “I think it’s because we’re not that hard on ourselves”, with the lack of an impending deadline to speed them up, when Renaud retorts, “of course, because you like to spend hours splitting hairs and playing a thousand times the same fucking riff!”, to much amusement of everyone there.

The lyrics are next on my list; the band have songs covering such diverse topics as hipsters, the gay agenda and getting drunk with Jesus. Is there a purpose behind the lyrics? Blaise jumps in immediately: “Just to say, I didn’t write any kind of lyrics on the last album, so I don’t know what [Renaud] was thinking.” Fortunately, Renaud owns up: “I’m the one responsible for all this shit. I’m so sorry. Well basically I mean we’re playing in a heavy metal band…kind of. Nobody cares about the lyrics. So basically what I write is stuff I have fun writing about, and usually it’s making fun of all the idiots around us.” The title track of their new album, ‘Adam & Steve’, is a great example. “I remember watching CNN two or three years ago, there were the Tea Party protests in the US. Those guys had a banner that said “God created Adam and Eve, not Adam and Steve” and I was like WOW”, snapping his fingers for emphasis. “So I took over it and now it’s like an anti-anti-gay song.” But beyond the mockery of idiots and humorous songs in general, there’s no real meaning to be read from the songs. “We never wanted to have anything to tell people, anyway,” he rounds off.

Moving onto the subject of influences, I ask for one record from each of them that inspired them to play in a band. Right off the bat, Renaud answers: “It’s Me God, from Breach.” The Swedish band have had a very strong influence on Kruger, and he summarizes their sound succinctly: “it’s the punk side of Neurosis with a rock n’ roll vibe”. Blaise follows up with his own love of Breach, but their last album Kollapse instead, which was “way more atmospheric” and one of those records you can “take the first song, let the album go until the end, then put it back on the first song”. Renaud mentions that Breach are “probably the most underrated band in the history of that kind of music. We stole EVERYTHING from them, and nobody knows. That’s the good thing about it!” It’s not just Breach though: the band express their love of Entombed’s thick and dirty sound, and have previously done covers as wide-ranging as Depeche Mode’s ‘I Feel You’ and White Zombie’s ‘Super-Charger Heaven’.

However, influences, as we all know, are not just musical; a favorite question of mine is always to pitch which books a band would put on a reading list of a university course in their band: “Kruger 101”, if you will. After taking a while to deliberate over the subject, Renaud comes up with an eyebrow-raising suggestion: the wonderful Calvin And Hobbes comic series: “I’m a fucking fan of them. There’s a couple of songs inspired by them too,” although it’s pure speculation for us so far as to which they are. He also taps Pierre Desproges for the reading list: “Very cynical and funny guy, he died in the 70s. He was a comedian, but very critical,” not unlike Renaud himself in his own lyrics: see the song ‘Muscle’ for instance, making fun of “guys who spend their lives in fitness”.

To round out on this in-depth interview, I ask what initially starts as an innocuous question: what’s the plan for the band in the next five years? I should have known something was coming when Renaud mutters “oh shit”, but wasn’t quite prepared for the band’s answer. “Difficult question to answer. We announced that the new one would be the last one.” Blaise adds quickly, “Well, not that really serious, but a little bit.” Renaud follows up: “We want to play again, tour again, but we need to get the time and availability. The matter of time to do it properly. We’ll think this over.” Considering their latest album went well over the 100% crowdfunding budget, this seems a strange decision to make, but there’s more to it. “It’s getting difficult because we have kids and jobs. We wanna do this the right way, not like fading away because guys are not available so it’s just Saturdays in the neighborhood!” Renaud says, half-joking, “C’mon, I’m 42. I do this and I need a week to recover!”

At this point, it behooves us to ask what their regular day jobs are. Blaise responds first: “I’m an urban planner, involved in architecture and things like that.” Renaud fills in for the others: “The drummer is a sound engineer. Guitar player is a graphic designer, other guitarist is a teacher, and I used to have another record company. I’m a distributor, promotion company, representing labels and bands in Switzerland. But I’m just changing these days, I’m gonna have a really big restaurant in December. It’s gonna be roots Swiss food, not just fondue. Classy food.” And a diverse audience, no doubt.

It’s a shocking reminder of what the two of them mention earlier in the interview, that it is hard to be a band in Switzerland, with an unsteady income and a lot of effort going on behind the scenes. While Kruger think over the plan, we at Ech(((o)))es and Dust urge you to check the band out, either on the road or any of their albums. Their latest Adam And Steve is a great place to start over on Listenable Record’s Bandcamp, and the band have their other albums on their own Bandcamp page.

Mark and Ech(((o)))es and Dust thank Renaud and Blaise for their time, Listenable for the opportunity, and Nightshift Promotions for the office space for the interview.