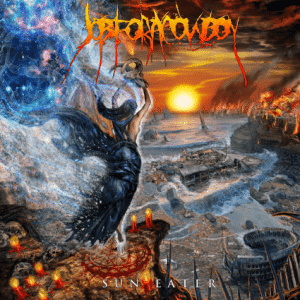 Job for a Cowboy have entered the ring, have thrown the gloves on the floor and have said bring it on. Not since I first heard Cannibal Corpse’s Tomb of the Mutilated have I enjoyed a death metal album in its entirety. Job for a Cowboy have nailed everything on their fourth studio release Sun Eater.

You can basically tell from Tony Koehl?s mesmerising album artwork what you are in for once you press play. A landscape full of captivating colours, a beauty that hides the utter decimation that’s befallen. Your ears will succumb to the brutal sonic fires as the sun sets like clockwork in the background. There is a melodic beauty within the absolute heaviness to the entire album that is unheralded on nearly every other death metal release. Period. The Arizona five piece have never shied away from technicality. The songwriting on this album is proof of that. Yet their compositions have found an organic release which leads every tune to menstruate into every other tune.

Johnny Davy’s vocals have found a melodic murderousness that most brutality vocalists could only dream of. With the juggernaut that is Sanicanndro and Glassman’s guitars entering the realms of the brown note, the monstrous heaviness of this album is perfectly offset with a saccharine haunting. The dynamics of Schendzielos? bass playing are second to none and at last the bass has been given its rightful place in the sun. Pun totally intended.

This leads me to give props to the lads? producer, Jason Suecof for he is undeniably Job for a Cowboy’s secret weapon. Jason Suecof himself has a more than impressive CV but has undoubtedly gone from strength to strength which each release he lends his hands to and just as the band have hit an all time high so too has his production. He has succeeded where many have failed. Blending some scarily heavy elements with a finesse that lets each member of the band kick some serious sonic ass without stepping on each others shoes. From session drummer Danny Walker, Tony and Al’s behemoth of guitars, Nick’s bass and Johnny’s vocals, Suecof has managed to create an individual footprint for each band member and yet bring it all together so as to give you one big ass kick in the cerebral.

Sun Eater is Job for a Cowboy’s finest release to date, a pure listening gargantuan that has all the elements you’ve come to expect off the boys and more. They’ve matured in sound, honed their writing skills and given themselves a massive injection of awesomeness to produce what could be the metal release of the year.