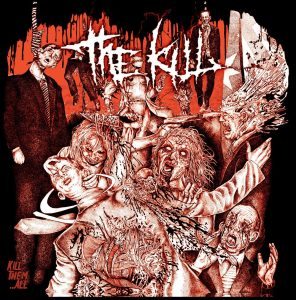 Released on January 3, 2015 via Blastasfuk Records

Oh, what’s that incoherent noise that is so unbearable? Sounds fucking fantastic, who’s this band? As far as the Southern hemisphere goes with regards to grindcore, you’re not really going to walk into your local music venue finding something you like as far as grindcore is concerned. Let’s just say it hasn’t been bountiful, up until maybe a few years ago, with some of the best grindcore coming out of Australasia in particular. Our Indian Ocean counter parts have been killing it in the extreme metal scene and more so, with regards to grindcore and powerviolence.

Enter the grindcore trio from Melbourne, Australia, simply known as The Kill. I first heard of these dudes in 2012 in my search for music (or anti-music) that would push the absolute limits. Not sure what I was searching, but, it had to be abrasive, something with a fresh take on grindcore, other than the European and North American incarnations. Harder, faster and dare I say different? Most extreme music genres, such as grindcore can become very stagnant in terms of progression and re-invention, but not these Aussies. The Kill released their first full-length titled Make ’Em Suffer in 2012 on Blastasfuk Records. I was absolutely blown away by the debut full-length and had the opportunity to see them live in the Czech Republic a few times including their Obscene Extreme performance. Mostly the crowds didn’t really know what to expect and were pulverized by the sheer brutality, speed and protocols of ant-sound from the grindcore trio.

The Kill is proof that good guys go grind, as they’re all round swell blokes, who don’t take it too serious, but they’ll fucking annihilate you live. Their lyrical content is generally about horror, humour and the stupidity of mankind from what I can tell, so what’s not to like. So 2015 came around and it started off with a black eye as The Kill released their second full-length titled Kill Them…All. It is safe to say the massacre continued with this release, with the band getting more and more into its own signature sound and the key to that is not trying to sound like anyone else. Signature sound is incredibly important for any band, especially within the realms of extreme musical expression. Even more so with a small scene, which happens to be the case in Australia, with the members that all participate in various side projects.

Kill Them…All rips into you at an uncompromising speed that doesn’t really let up at all throughout the record. It contains some very rhythmic sections, guitar wise, but maintains that all out obliteration with incredibly drumming speed, precision and fines, which is on the dime, all the time. The vocal work rounds it all off into something that will melt your face off, from start to a rather abrupt finish. There seems to be a constant power struggle between guitarist and drummer, while a very angry man is screaming about it. Poking fun at everything and everyone, which makes it just so much more enjoyable.

The sheer intensity and energy give you a proper wake up and before you know it, it moves in the living room with the intention of mowing people down. But don’t blink, cause you might miss it. I have managed to spin this a fair few times and it still surprises me how quickly one can listen to 23 tracks.

The Kill’s Kill Them…All is phenomenal and definitely worth the few Aussie dollars I threw at it on Bandcamp! I would highly recommend amongst it, you won’t be disappointed!