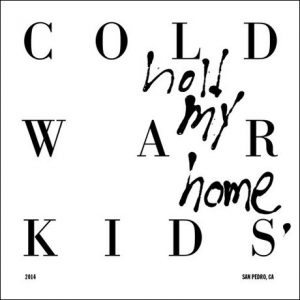 Everyone has those bands that get under their skin – they become a bit more fanatical with every release and will recommend that band to anyone they see, sing their songs in showers and cars and knowingly nod at strangers wearing t-shirts that reveal their own love for that particular band. I’m a bit like that with Cold War Kids, which I mention as something of a disclaimer. When I first heard those brutal opening piano chords on ‘We Used to Vacation’ I was in for the long-haul. First time I saw them was at QMU in Glasgow. Nathan Willet’s voice was something to behold, a real work of bluesy wonder – something that marked Cold War Kids out as more than another indie-rock band. That’s maybe why sophomore album Loyalty to Loyalty was so much of a disappointment. It was more experimental, sure; darker, more philosophical even, but the anthemic positivity that had been the making of debut Robbers and Cowards was gone. It reviewed okay, it even sold in decent numbers, but it wasn’t for me.

2011’s Mine is Yours was. To me, it was everything a rock album should be. Spine shivering choruses, huge bluesy riffs, heartfelt lyrics. It came out just before I got married and I had it on heavy rotation on my honeymoon. Why does this matter? Well, when you’re belting through Death Valley with the top down in 100°F heat and ‘Louder Than Ever’ is turned up full blast, it kinda sticks in your mind. Forever. In my daydreams, it’s one of my Desert Islands Discs, the Radio 2 audience being blown away by the chorus while me and Kirsty Young wig the fuck right out in the studio. Anyway, I digress. Dear Miss Lonelyhearts was every bit as strong – helping the band to pass the 500,000 album sales mark worldwide.

As I said, I’m putting all this out there to qualify this review. Cold War Kids are a band I’ll listen to for the rest of my days, so does that mean I can be completely objective about a new release? In short, not really. Not in a sycophantic way though – more the opposite. If this album was shit I’d waste no time in talking about how shit was, about how the band had lost it, how each album track was a blow to my solar plexus. It’s not shit though; it’s brilliant in parts and dull in others: a thumping, bluesy, searing album – a tired, convoluted, shapeless album.

There have been line-up changes (Modest Mouse’s Joe Plummer replacing Matt Averio on drums, following another Modest Mouse alumni Dann Gallucci into the line up, leaving just Willet and bassist Matt Maust as original members), there has been a decline in popularity, but the band has emerged in decent shape. Hold My Home feels genuinely exciting in places, as raw as Robbers & Cowards, but with the baggage that comes from being a decade into life as a band.

‘All This Could Be Yours’ begins in familiar territory: blues piano, thudding 4/4 drum beat and Willet’s pained vocal. The repetitive “Call me up” nature of the chorus lets it slip into your psyche. “And I have been waiting / but you need a sign / that all this could be yours / be yours tonight,” sings Willet.

‘First’ is just as brash and in your face. Lyrical, it’s as strong as it is musically – the band backing Willet’s as well as ever. This album hits you like a heavyweight’s fist, but withers. ‘Hot Coals’ is more jangly, a primer for the more out there ‘Drive Desperate’, which to be fair, is where things peak. The second half of the album suffers from a lack of vibrancy. The vapid ‘Hotel Anywhere’ is barely a b-side, while ‘Go Quietly’ seems to harbour an unhealthy U2 influence.

The title tracks brings things back to life a bit – an electronic beat driving forward a blazing vocal performance and festival-friendly chorus. Some killer and some filler, to paraphrase every commercial radio DJ ever.

So, as a massive fan, I’m content – happy even. But I know there’s more in the locker – there has to be.