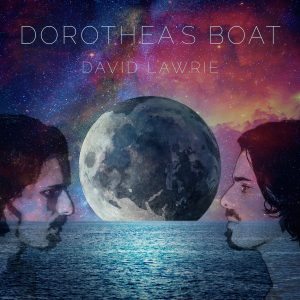 Released on March 9, 2015 via Ishikawa Records

Every-so-often I am presented with music to review that is so utterly gorgeous that I run out and spend my cold, hard cash on the best artefact of the music I can find. While I am more than happy for some releases to live in my life as MP3s, sometimes I am so moved by the music I’ve been presented that I have to own it in the best format I can find. Case in point is Dorothea’s Boat by David Lawrie, music so good I backed the vinyl production on Kickstarter.

Why did I do that? Quite simply because this is the best progressive rock album I’ve heard from an independent musician in a long, long time. David Lawrie is an extremely interesting artist and I wanted to support him in his endeavours. And support him I did, along with a number of like-minded fans who gladly clubbed together to funded production of his album on vinyl.

Lawrie is 2015’s Peter Gabriel (not that Peter Gabriel isn’t, you know, Peter Gabriel in 2015). A uniquely singular voice with mad production skills who can create the most wonderful music, sounds that are rather unmistakably his. He is a talented chap who deserves a far wider audience for his crazy off-the-wall lyricism and ridiculously consistent avant-garde musical expressionism. He gets sound and sculpts exceptional walls of sound on this release, sounds that include his voice – there is something deliciously tangible about his choice of words as if he chooses just the correct word that not only fits the narrative but sounds just right for the music.

Lawrie’s wordplay is what attracted me to him in the first place. His Storm Petrel EP caught my attention with its progressive flow, bass orientated wall of sound and his imaginative lyricism. I am, therefore, delighted to see ‘Storm Petrel’ has pride of place as track four on this release, the sweet point where the Lawrie magic has begun to work.

I adore the hammered dulcimer-like sound Lawrie uses throughout the album (not entirely sure what the instrument used actually is, but it sounds like a hammered dulcimer to me). Tracks like ‘Storm Petrel’ and ‘Species’ are really enhanced for me with the pulsing rhythmical energy of the sound, it adds a whole other dimension to the music. I also love his fondness for bass – tracks like ‘The Serpent and Her Fangs’, which has a wonderfully warm and fuzzy bass sound in the mix, really highlight his ability to make engaging walls of sound.

A highlight for me on this album is the penultimate track – ‘Chlorine’ – it is a truly astonishing piano-orientated instrumental soundscape: it has a wonderful feel, an ominous ambience, and one that highlights how talented Lawrie is. He is a musical polymath whose real talent is to bring everything he has created together in such a seamless manner, he is the whole package and his music is simply an expressive extension of his being. Oh to be that creative!

All in, Dorothea’s Boat by David Lawrie is one of my favourite releases of 2015, so far. Wildly imaginative, deeply engaging and thoroughly entertaining, Dorothea’s Boat is a roller coast of a sonic ride that just keeps giving.